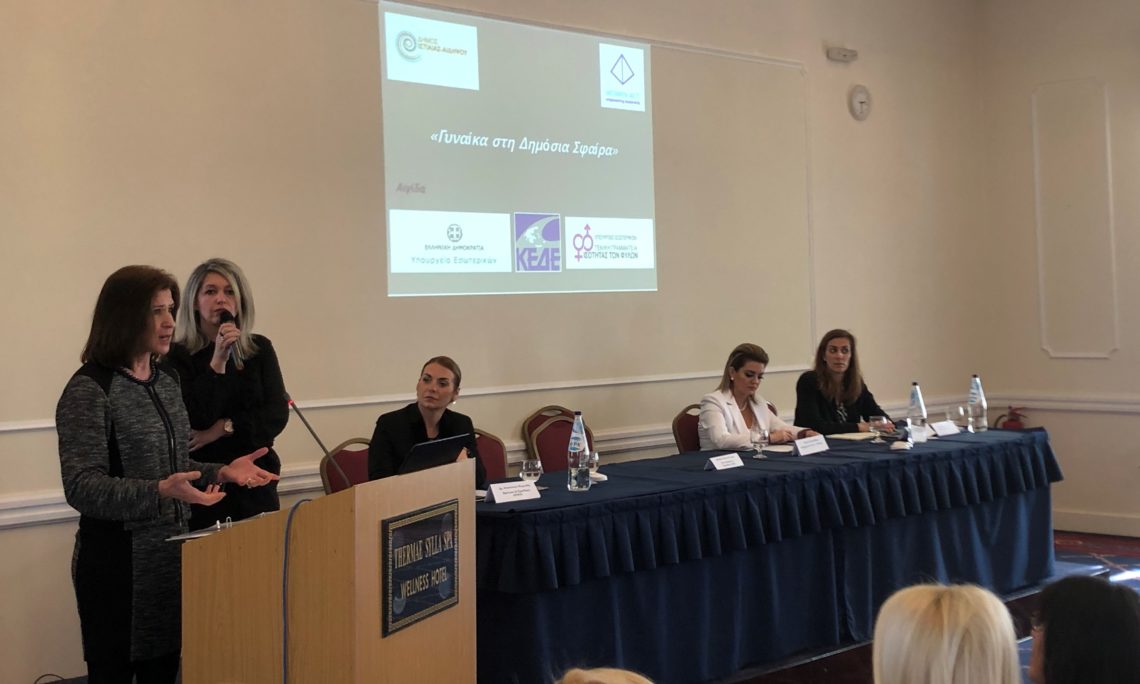 Organized by Women Act and Municipality of Istiaia

Thank you Mayor Efstathiou-Spanou for the invitation. Thank you all for the warm welcome.

It is inspiring to see so many successful women around the room, with different experience and expertise, committed to the goal of advancing women in the public sphere.

As a diplomat, and a woman in Public Service, I am honored to be included in your conversations, to have the opportunity to hear your insights, and to learn from you about what is happening in communities around Greece.

While some of the specific issues that you raised differ from those we see in the United States, of course, many of the challenges are similar.

On women in leadership and government positions in the United States, some recent statistics are heartening.

While this represents progress, there is still a clear gender gap, and one that matters to Americans.

According to a Pew Research Study in 2018, a majority of Americans say they would like to see more women in top leadership positions in politics and the corporate world. They also see similar barriers in both spheres:

About 60% say that women have to do more to prove themselves than men, and about half say gender discrimination is a major barrier.

Other factors that were cited include women not having access to the same kinds of personal connections and networks as men, fewer opportunities to interact with people in senior positions outside of work, and the impact of family responsibilities.

The U.S. government places great importance on women’s equal participation in all sectors of society, both in our country and internationally, and has made women’s empowerment a diplomatic priority.

For women to reach their full potential in the public sphere, they need the tools and relevant job skills to remain competitive in today’s meeting rooms and marketplaces.When women are empowered to fully participate in their local economies, their economies grow. This creates conditions for increased stability, security, and prosperity for the wider community.  When women have equal opportunities, communities are more likely to thrive and solve challenges peacefully.

With this in mind, on February 7, 2019, President Trump signed a National Security Presidential Memorandum to launch the White House-led Women’s Global Development and Prosperity Initiative.

The Initiative seeks to empower women worldwide to prosper in the workforce, to succeed as entrepreneurs, and to be enabled in the economy.

For the U.S. Embassy in Athens, working with partners in Greece to empower women has been a priority in our programming efforts in recent years. It is our fundamental part of our commitment to advancing the U.S.-Greece relationship and our shared goals on regional security, stability, and prosperity.

Next week, we are hosting two female American filmmakers for a series of screenings and workshops at the Thessaloniki Documentary Festival and at the Exile Room in Athens, aimed at offering skills to Geek filmmakers. This program is designed to focus primarily on Women in Film, and we are organizing a special networking event for Greek women filmmakers.

We make an effort to ensure there is strong female participation in all our special entrepreneurship initiatives, including delegations to the Global Entrepreneurship Summit and the South by Southwest Interactive Festival.

Aiming to help bridge the gender gap in STEM, we have created one of our flagship female empowerment programs, the CodeGirls coding workshops for girls 10-16 years old, with over 350 girls participating to date. The program is currently in its fifth year, and last weekend workshops took place in Alexandroupoli. We have organized this program in cities across Greece – from Kalamata to Ioannina, and we would be happy to consider new cities and regions if you are interested.

Last year, we partnered with Orange Grove to organize a pitching competition for women entrepreneurs – the Squeeze. The program featured an all-women panel of judges and a series of workshops and networking events for female entrepreneurs in Greece.

Also, when the Ambassador or another official is invited to speak at a conference or to a specific group, we ask if there are women represented in the agenda and in the audience as well. It’s one way that we can raise awareness of the need for women to have a platform to share their expertise and their perspective on a wide range of issues – from energy and investment to politics.

Both Ambassador Pyatt and I are firmly committed to supporting these efforts and working with our Greek partners, in government, civil society, business, academia and elsewhere to empower women of all ages to become leaders in their communities, in their work and in their governments. We acknowledge the importance of women’s voices being heard in the public sphere and in policy debates.

That is why events like this one are important in moving the gender equality agenda forward and building networks of women who support women.

It’s also important to identify synergies and opportunities to partner, particularly at the community level. My colleague and Public Affairs Counselor Monica Cummings and I would be pleased to brainstorm with you on ways to cooperate in the future.

Today’s event is a wonderful initiative, and I would like to congratulate the organizers, the Mayor of Istiaia and Women Act, and all of the Greek government officials and mayors who joined forces for today’s excellent and empowering conversations.