Ambassador Pyatt with Professor Daly of The American School of Classical Studies in Athens in front of an ancient Athenian ballot box, at the Stoa of Attalos.(State Department Photo)

Athens, November 7, 2016 – Ahead of the November 8 Presidential elections in the United States, U.S. Ambassador to Greece, Geoffrey R. Pyatt visited the Athenian Stoa in the center of Ancient Athens, the “birthplace of democracy.”  His visit underscored the importance of Greece’s contributions to our democratic ideals.  Ambassador Pyatt received a tour of the Ancient Agora site by Dr. Kevin Daly of the American School of Classical Studies, Athens (ASCSA).  Dr. Daly briefed the Ambassador on the role of the ancient Athenian Agora, the center of the ancient city, where citizens would assemble to cast their ballots for elections on many issues.

The Ambassador saw what archeologists believe to be an original ballot box dating from the fourth to fifth century BC, as well as bronze ballots found at that site that ancient Athenians used to cast their votes.  Reflecting on the site and its connection to the U.S. election, Ambassador Pyatt noted, “Democracy never gets old.”

The Ambassador further remarked, “We all know Ancient Greece gave life to the democratic ideals and values which continue to influence the way we live today.  But it is incredible to visit the actual site of the first expressions of democracy.  Because of the idea of democracy bestowed by the ancient Greeks, citizens around the world, including in America, can now exercise their right and privilege to vote.”

Ambassador Pyatt highlighted that, like in Ancient Athens, voting is the opportunity for citizens in all democracies to shape their countries’ futures and lead us all toward a better world.  “That does not mean democracies are without flaws,” he said.  “But it does mean that the cure for what ails our democracies is greater engagement by our citizens – not less.”

“Democratic values are the bedrock of the U.S. relationship with Greece.”  Ambassador Pyatt emphasized, continuing, “The experience of Greece over the last few years has a lesson for all of us.  Greece has faced enormous challenges, but the democratic institutions of this country have functioned without interruption.  And that’s something that’s worth remembering.  To me, this shows both the remarkable resilience of the Greek people, but it also demonstrates the enduring power of democracy.”

Ambassador Pyatt concluded by stressing, “As we exercise our right and privilege as American citizens to vote, we remember that participating in an election is a tremendous opportunity that should not be taken for granted.  Although it might seem like a simple process – dropping a bronze ballot or a piece of paper in a box – it is critically important.  It is inspiring to be standing at one of the original ballot boxes where the world’s earliest votes were cast.” 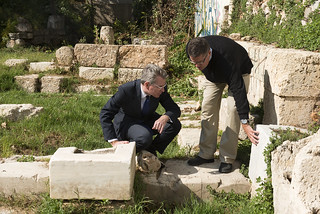