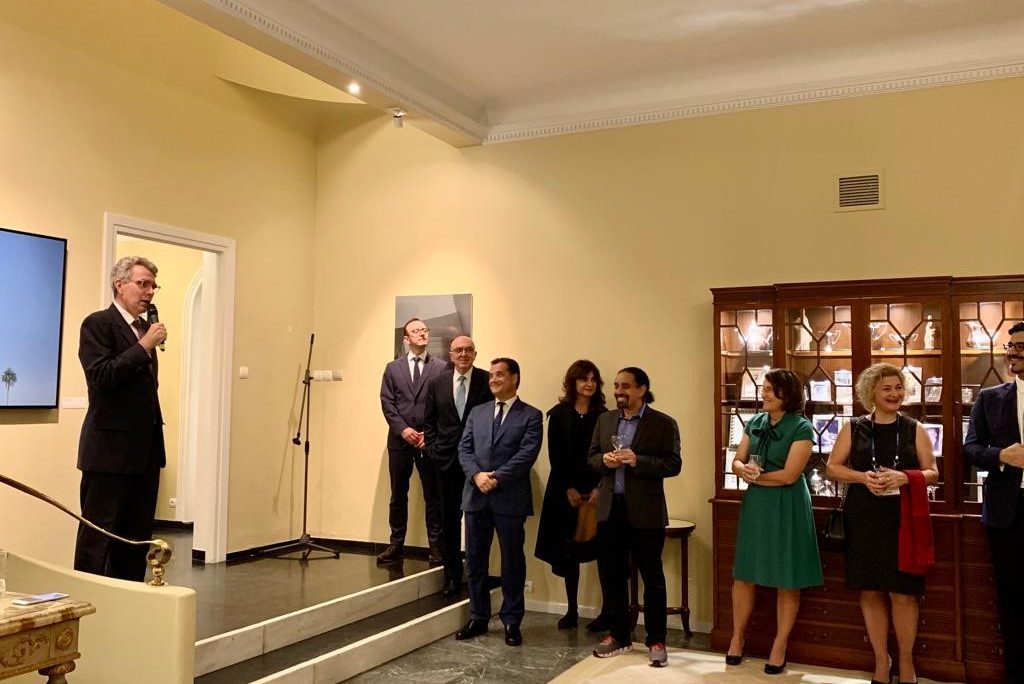 Good evening, everybody. I’m going to interrupt just for a second to say a big welcome. First of all, for those of you who might have gotten by on the way in, those of you who snuck in through the backyard, or those of you who weren’t invited [laughter], I’m Geoff Pyatt. I’m the American Ambassador here in Greece, and my wife Mary and I have been here since September 2016, so it’s been a really exciting time in Greece, in the U.S.-Greece relationship.

I’m really thrilled that we’re able to host this event this evening. Most importantly, I’m a Californian, grew up in San Diego. My wife Mary, also a Californian, and our kids are in Los Angeles, and so I’ve grown up around the technology industry in California. My father is a nuclear physicist, and I grew up hanging around guys with IBM cards and slide rules, and all the stuff that young people in technology today, if you show it to them, they won’t know what it is, but I’ve also seen the incredible transformative power of technology. And so I’m a real believer in what Singularity has been trying to do.

I’m also a believer because my most important job and the job of our team here at the American Embassy is to help accelerate and deepen the U.S.-Greece relationship, and in particular to help Greece with the process of emerging from a really difficult, historically unprecedented ten-year economic crisis. In that regard, I think one of the real unnoticed success stories in Greece is what’s happening in the technology sector, the presence of a really vibrant, resilient, creative technology sector, not just here in Athens but also in cities that most Americans haven’t ever heard of like Thessaloniki or Patras or Heraklion in Crete.

I know also this is a top priority for the government, and I’m especially honored this evening that we have with us the Minister of Development, Adonis Georgiadis, who’s up here at the front, and if you haven’t met Adonis, just to tell you what a believer he is, his wife was actually at Singularity University, but I learned today that his son also played hookie today to sit in on some of the talks. And he’s a great friend personally, a great friend of the United States and will actually be traveling to Washington on Saturday as part of a big event that we’re doing with our business partners to put a positive spotlight on the U.S.-Greece relationship.

One other introduction I would like to do is Corey Johnston. Corey, Corey are you hiding back there? So, Corey is a long-time colleague, currently at the State Department working with our Undersecretary for Economic Affairs. He has a high-falutin title, which I think is Chief Competition Officer, but what Corey’s real job is is helping to wrangle the interagency, which is what we in government call all the different parts of the U.S. government, in advancement of U.S. competitiveness globally and helping to build bridges between the most competitive parts of the U.S. economy and international partners. One of those partners today is Greece, and that reflects the priority that the U.S. government has placed on our relationship here, the U.S. interest in seeing Greece succeed in the effort at economic reform and transformation that the government has set in motion and helping especially to deepen the ties between our private sector and their Greek counterparts. So Corey is here with a big delegation that includes experts from the FCC and other parts of the U.S. government that do all the technical stuff that makes the U.S. economy grow. So very grateful to have him here, and Corey, I hope you will meet some of our partners here this evening.

I’m going to finish up, and I’m going to hand it over to Niki who will say something as well, but I want to finish up. First of all, I encourage especially everybody who is here as part of the Singularity team – first of all, I’m sorry you can’t stay in Greece, I guess you have to get on the airplane – but I would encourage you to meet some of the Greek entrepreneurs who are here this evening because I think it’s a really interesting story that deserves more attention. And it reflects both the ingenuity, the remarkable human capital that I have discovered through three years of travelling around this country, but also as I was saying to one of the folks from the Stanford team, I think, you know, a classical case of Schumpeterian economics and creative destruction that Greece has gone through a very difficult process of economic adjustment, but what’s emerged from that is a really competitive, really exciting technology and innovation economy that’s going to be a big part of the success story that this country’s going to have in the future and one that the U.S. government, the U.S. Embassy, and I personally am strongly committed to working to reinforce. So, thank you all for being here. Enjoy the evening; enjoy the food; enjoy the garden. Don’t miss the sculpture, which we are all very proud of, and Niki, I guess, over to you for whatever I should have said but didn’t.