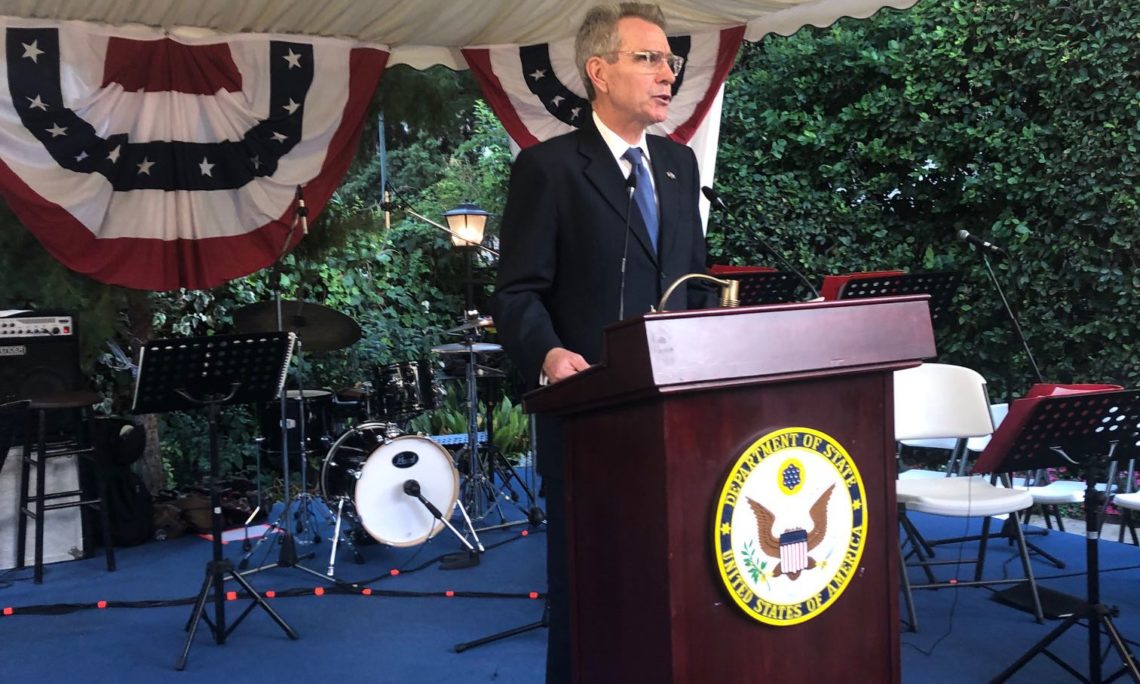 Καλησπέρα σας.  Mary and I are delighted to welcome everyone to the residence this evening as we celebrate the 243rd

I want to start this evening with a special welcome to the many American State Representatives, Assembly Speakers, and Senators who are joining us this evening. I can think of no better way to celebrate our shared democratic values. I’m grateful as well that we have such a large representation of the Greek government here, including Minister Katrougalos, Minister Apostolakis and all of the service chiefs, and anybody else who I missed in the receiving line this evening.

I also want to recognize the many other Greek political leaders who are here,including New Democracy Vice PresidentAdonis Georgiadis, Shadow Ministers Kefaloyiannis and Koumoutsakos, and again anyone else I’ve missed.  Thank you all for being here with us, and I hope everyone enjoys at least a short break from campaigning.

One topic your election has brought up is the upcoming 200th anniversary of the Greek War of Independence.  And for me, that’s a reminder of our own bicentennial in 1976.

As a teenager growing up in Southern California, that was a summer of skateboards, Elton John and Kiki Dee singing “Don’t Go Breaking My Heart,” and a tragic fashion sense that involved lots of brown and orange stripes, bell bottom pants, and the red, white, and blue bunting of our own bicentennial.

During its cross country journey that year,the American Freedom Train stopped at Miramar Naval Air Station near my parents’ house earlier that year.  We were all on the lookout for bicentennial quarters, and President Gerald Ford used the year-long celebration to stress the themes of renewal and patriotism after the national traumas of Vietnam and Watergate.

That summer, we celebrated the values that our American founders had inherited from the ancient Athenians: democracy, rule of law, and the importance of an informed citizenry.

For over 200 years, generations of American leaders have sought to form a more perfect union within buildings whose stately pediments and Doric, Ionic, and Corinthian columns were explicitly designed to remind us of our Greek inheritance.

And just as the Ancient Greeks’ vision of a government of, for, and by the people deeply influenced our founding fathers, the American Revolution inspired the Greek struggle for independence, prompting philhellenes like Dr. Samuel Gridley Howe to leave home and endure great hardships to support their Greek comrades in arms.

Almost 200 years later, I’m happy to report that the longstanding bonds of cooperation and friendship between our modern nations are stronger than ever, and there’s broad consensus in Washington that Greece has become one of our most valued regional allies, a pillar of stability and a guardian of Western democratic ideals in a particularly challenging region.

In a few days, Greece will elect its first government of the post-crisis era, demonstrating the resilience of your democratic values and institutions, even amid an economic downturn of unprecedented length and depth.

I can assure you that whomever the people of Greece choose as your next leaders, the United States will remain fully committed to their success.

Our nations are forever linked by our shared democratic ideals and by the legions of Greeks, and Americans, who have pledged to defend and uphold those values.  That’s something worth celebrating at any time of year, but this month in particular.

So to conclude, I want to thank our Embassy team, especially Kurt Pearson and Shawn Bush for bringing this massive event together, our wonderful Master of Ceremonies Eleni, and all of our donors and volunteers without whom all this would not have been possible.

And, of course, my wife Mary, who has been an unwavering partner through this historic period of U.S.-Greece relations.

So please join me in raising your glasses in a toast to the 243rd anniversary of the United States of America, to the foundational values we share, and to the gift of Athenian democracy, for which we will always be grateful.  And as Greece prepares to celebrate its own bicentennial in 2021, I’m sure we will often hear the cry, Ζήτω η Ελλάδα. Ζήτω η Αμερική.  Ευχαριστώ πολύ.