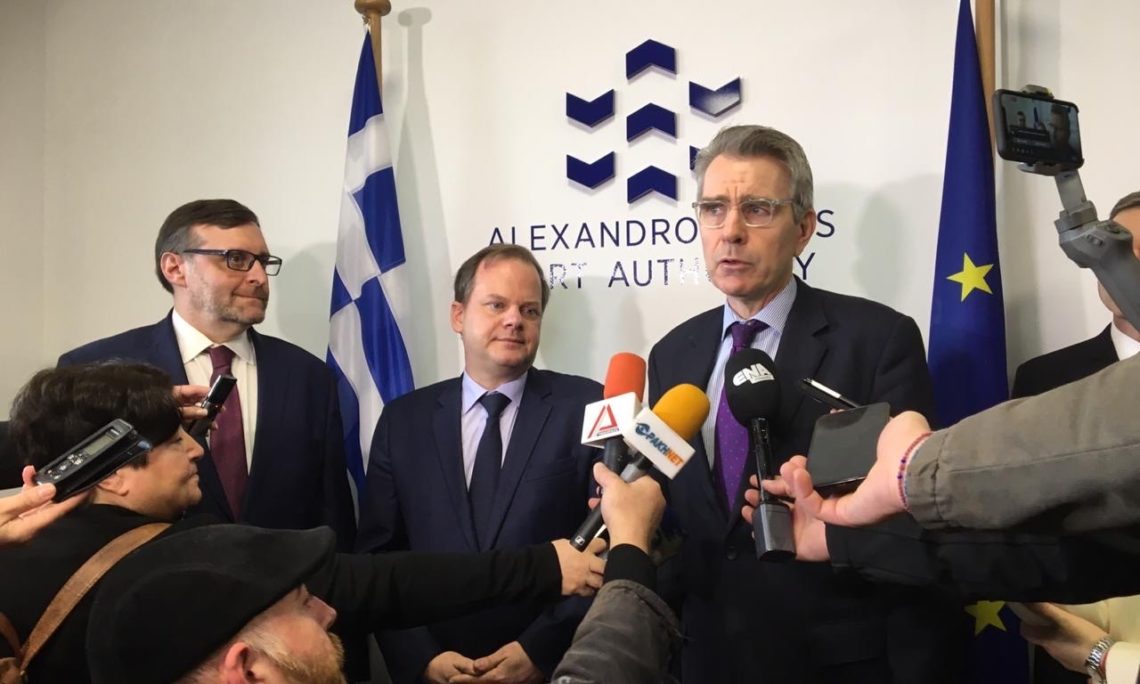 On March 7, 2020, Ambassador Pyatt and DAS Palmer, together with Greek Minister of Transport Kostas Karamanlis, give statements to press at the Alexandroupoli port.

Ambassador Pyatt: Καλημέρα σας. Let me start by saying what an honor it is for Deputy Assistant Secretary Palmer and I to be joined today by Minister Karamanlis. The Minister and I had the opportunity a year ago to travel in this region together visiting his ancestral home in Serres, and we really appreciate his willingness to come up here to be with us in Alexandroupoli. My presence, Matt’s presence here is a gesture of solidarity with the people of Eastern Macedonia and Thrace, the people of Evros, who have borne the brunt of the recent escalation of the migration crisis on the border, but it is also a reflection of the strong strategic focus that the U.S. government has placed on Alexandroupoli. It is a reflection of our optimism about the prospects of working with Prime Minister Mitsotakis’ government to see to fruition a complex of projects: the privatization of the port, in which there is strong American private sector interest; the execution of the Floating Regassification Unit in Alexandroupoli, which will play a major role in reinforcing the energy security and independence of the countries of southeastern Europe; the implementation of the IGB and TAP pipelines, which are literally changing the energy map of southeastern Europe, and the prospect that Alexandroupoli will become once again a major logistics and transshipment point for the wider region. So this is a very exciting time. I look forward today to spending some more time with the Minister, showing Matt the port, seeing the possibilities here, but also talking about how we will work with Prime Minister Mitsotakis’ team to bring American investment to this strategically vital corner of Greece.

DAS Palmer: Thank you very much Ambassador, Mr. Minister, καλημέρα σας. It’s an honor and privilege for me to be here today, and I’d like to thank the Minister for making the trip up from Athens to join us here today. There is a lot of excitement on the part of the United States about this project, about the opportunities, about the prospects for American business to come here to invest in this port, in this region, to build and deepen the partnership that we enjoy between the United States and Greece on a commercial basis as well as on a strategic basis. As the Ambassador noted, this is also an opportunity for us to demonstrate solidarity with Greece, with this city, with this region in a difficult period. I’d like to reaffirm and reinforce that, as we look at the events on the border, that what’s happening is unacceptable. This is consistent with what it is that the EU Foreign Ministers concluded when they discussed this issue yesterday at the Foreign Affairs Council. The United States also finds the current situation to be unsustainable, unacceptable. The uncontrolled movement of thousands of people who have been misled into believing that the road to Europe is open is fundamentally destabilizing, it’s unsustainable. It needs to change. So, we are here to underscore our firm commitment to this project, to this port, to support American investment and also here to demonstrate our solidarity with the people of Greece, with the people of this region at a difficult time. Thank you very much.

Journalist: I would like to ask you whether the current situation at the borders between Greece and Turkey will affect in any way the economic and geostrategic interest of the U.S. in the region.

DAS Palmer: I’m hopeful that we will see a resolution of the situation on the border in relatively short order; in particular I’m hopeful that the ceasefire that was agreed between Ankara and Moscow in Idlib will relieve some of the pressure as well as the assistance that the United States and other countries have offered to support migrants and refugees in Turkey. The United States has put forward an additional $108 million in assistance working through UNHCR and the International Office of Migration, which is intended in part to help alleviate the pressures along the border.

Journalist: Do you believe that, given the current situation on the borders, Greece needs to impose additional security measures?

DAS Palmer: Well, we support – as the President has made absolutely clear – Greece’s right to defend its borders. I, personally, have been impressed with the professionalism of the Greek security services along the border, the way that they’ve handled themselves, the way that they’ve dealt with a very challenging set of circumstances, and Greece has our support in terms of what it is that it’s doing both here, in Evros, and in the Aegean to ensure border security.