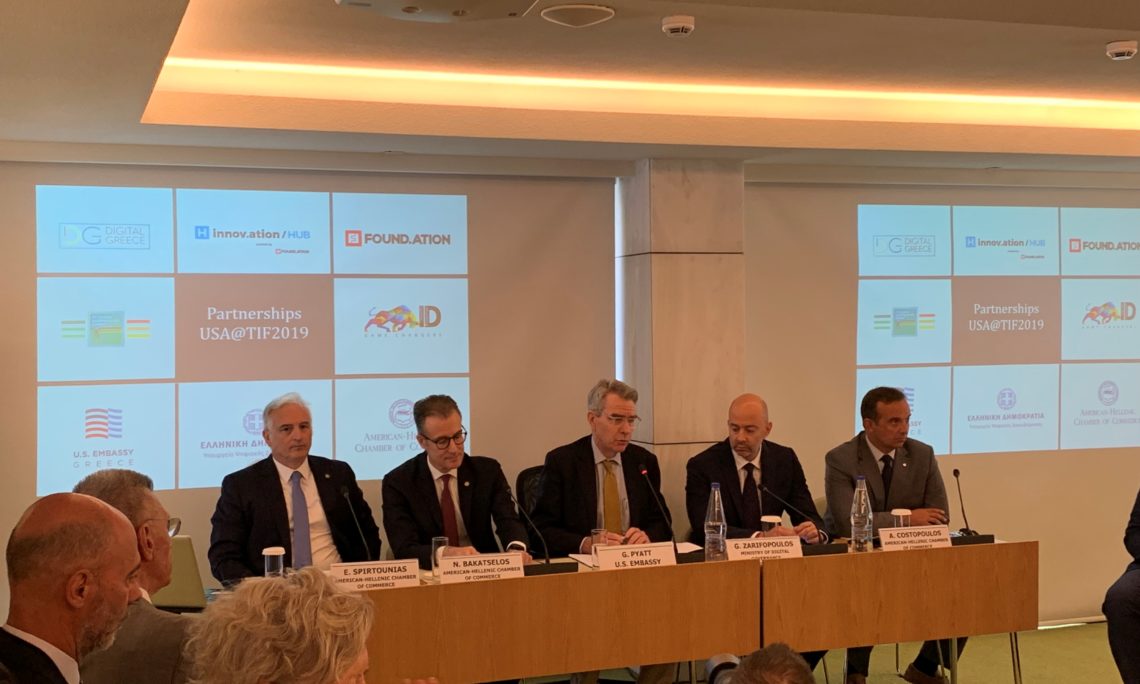 Καλημέρα σας.  Thank you, Elias.  First of all, I want to thank Minister Grigoris Zarifopoulos for joining us this morning and to say how delighted I am to be here as part of our renewed American engagement with this year’s Thessaloniki International Fair.  I also want to thank our partners at ΔΕΘ who have been so supportive of this.

As Honored Country at last year’s Thessaloniki International Fair, our partners at the American-Hellenic Chamber of Commerce filled the U.S. Pavilion with over 55 top-tier companies representing the very best of American technology and innovation.  Our landmark success as Honored Country elevated the whole of the U.S.-Greece relationship to a new level and inspired us to continue investment in this partnership.  So I want to start by thanking Nikolaos, Elias, Alex, and of course Simos for everything that we have been able to accomplish together but also for this initiative to carry the TIF baton forward into 2019.

We are very pleased to return to the 84th Thessaloniki International Fair and to join Ambassador Jain in India’s celebration as Honored Country.  Our renewed presence at TIF 2019 will focus on sharing American experiences and expertise in entrepreneurship, innovation, and technology through a series of events, keeping alive the “agora of ideas” which was so much a part of our presence as Honored Country last year.

I want to spend a couple of minutes, first of all, describing the strategic rationale for our continued engagement in the Thessaloniki International Fair.  TIF 2018 helped to set a new tempo for our bilateral relationship, and it invigorated our collaboration across the board.

The United States remains fully committed to supporting Greece’s full economic recovery.  And based on my many discussions with the new government, the Prime Minister and his cabinet, and their laser focus on cutting through red tape and pushing through investment-friendly reforms, I am more optimistic than ever about the opportunities for American investment and American partnership with Greece moving forward: in the Greek energy sector including renewables, in infrastructure and transportation, in healthcare, tourism, and of course, the emerging knowledge-based and innovative sectors of Greece’s economy.

As you all know, it’s been a long-standing American Embassy priority to engage with Greek startups, working with technology parks, programs like Fulbright and our International Visitors Leadership programs, and in the many pitching competitions and mentorship events that the Embassy has hosted during my three years.  And as you know, much of our programming at TIF last year aimed to create a supportive environment for the Greek startup sector jointly with our partners from the Ministry of Digital Technology. And in this regard, I’m absolutely delighted that Minister Pierrakakis decided to sustain the Ministry’s support for a special pavilion which is the umbrella for our engagement at TIF 2019.

Recognizing that our work in this area is more than just a one-week or one-year commitment, we’ve brought back the Innovation Hub with our partners at Found.ation to highlight the dynamic spirit and creative culture shared by the United States and Greece, and to promote increased dialogue and stimulate new collaborations.

We’re also co-sponsoring the 4th Global Agripreneurs Summit to connect the Thessaloniki Fair with the theme of the Global Entrepreneurship Summit, the preeminent gathering of entrepreneurs and investors from around the world, which the U.S. co-hosted with the Netherlands in June.

The Agripreneurs Summit will include public events, a trade expo, and a competition for agri-food companies—all to help our Greek partners take the next step forward in this critical and historic sector to the benefit of the Greek economy.

And in this regard, I’m very grateful for the support of Minister Voridis, who took no convincing when I described to him what we wanted to do in Thessaloniki.

Our participation again at the Thessaloniki International Fair also highlights the critical role that Thessaloniki, and northern Greece as a whole, plays as an international gateway to the Balkans and a wider market of 30 million people.  It is this strategic importance which we reemphasized over the weekend as the USS McFaul, one of our Navy cruisers, visited the Thessaloniki port, highlighting the strategic role of that harbor.

As we prepare to revisit the gains and ambitions of our bilateral relationship at the next U.S.-Greece Strategic Dialogue in October, we want to build on the positive momentum from TIF in all areas of our relationship, from energy and commerce, to security and defense, to education and culture.

In energy, for example, the U.S. continues to support Greece’s efforts to become a regional hub for European energy security.

You heard that last month when Assistant Secretary Fannon from the State Department’s Energy and Natural Resources Bureau came to Athens for the 3+1 Ministerial with Greece, Israel, and Cyprus, and I look forward to participating Friday at AmCham’s 3rd Southeast Europe Energy Forum in Thessaloniki and then getting back to Alexandroupoli at the end of our TIF week.

Greece’s natural resources offer fantastic potential for major long-term investment, and large American companies are stepping up with their technology, capital, and know-how.  ExxonMobil is a key investor in the hydrocarbon blocks off of Crete, and GE is expanding rapidly in the renewables sector.

The U.S.-Greece partnership is deepening in security and defense as well.  For instance, in northern Greece, we are working with the Greek Government on a 2.3 million-dollar project, funded by the U.S. Army, to remove a sunken dredger at the port of Alexandroupolis, making the port a more usable and valuable asset for Greece and increasing its attractiveness for commercial investment opportunities.

And through the newly launched FLEX program, impressive high school students from northern Greece and other parts of the country just arrived in the United States to begin study with the support of the Greek Ministry of Education.

All of these advances that we have registered since TIF 2018 are part of our vision to build on the high-level success of the U.S.-Greece relationship and take that relationship to the next level, expanding and deepening our ties.  Our renewed presence at the Thessaloniki International Fair is just one more way that the United States is enhancing and sustaining its engagement in northern Greece.  And I hope very much that you will all join us for the American programs there and look forward to another fantastic success with our AmCham partners.  Ευχαριστώ πολύ.