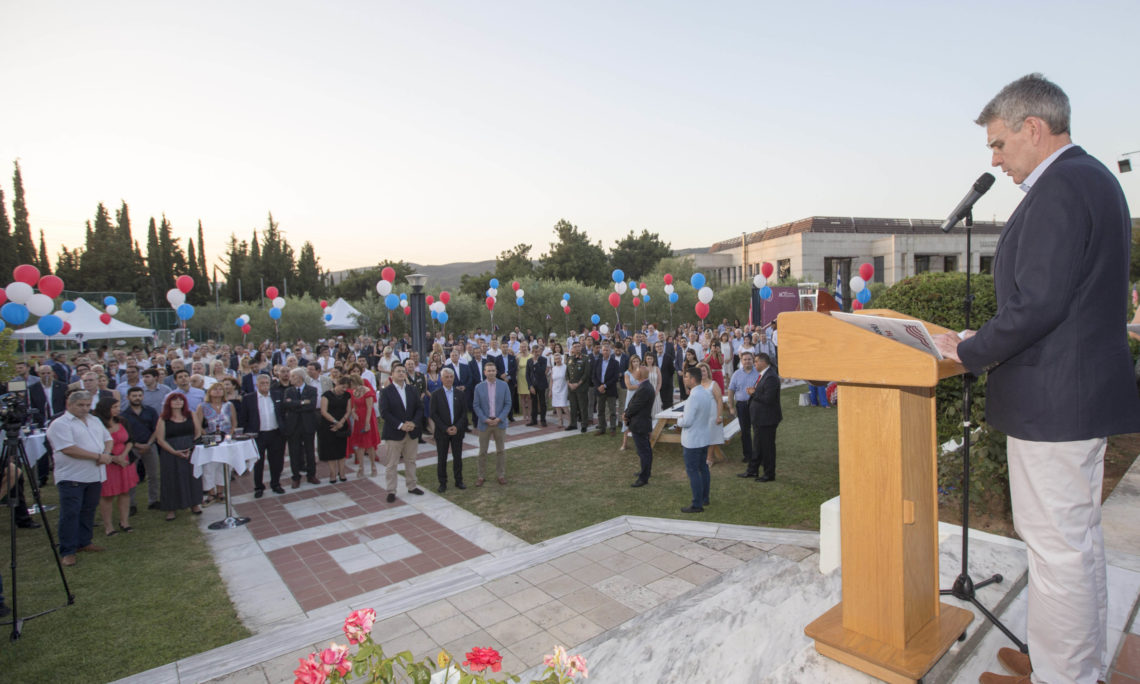 Καλησπέρα σας!  Thank you, Greg, for hosting us, and thank you to everyone for joining us to celebrate American Independence Day in northern Greece.

I particularly want to acknowledge Governor Tzitzikostas, Mayor Boutaris, Mayor-elect Zervas, who I just met for the first time this evening, and General Koutras, who we are very glad to have as our partner here in northern Greece.  I particularly want to acknowledge the generous words of Governor Tzitzikostas, who has been such a fantastic champion of the alliance between our two countries, without whom we could not have accomplished all we did around the Thessaloniki Fair, and who now has been reelected.  And as we learned in America, the reward for good work is more work, and Governor, we look forward to collaborating with you for another term to continue to deepen and strengthen the American presence in this strategically important part of Greece.

I also want to thank Panos and Anatolia College for hosting us and congratulate Anatolia and Pinewood on their successful merger.  Anatolia is a true gem in Greece’s educational landscape, a vibrant, U.S.-affiliated educational institution with a long history of fostering creative thinkers and leaders.  Bringing Pinewood back to Anatolia will strengthen both American-affiliated educational institutions and offer the students better preparation to lead in this new, knowledge-based economy that we live in.

This summer is a season of change.  At the Embassy, I am extremely proud to see our former Deputy Chief of Mission Kate Byrnes sworn in as the new Ambassador to North Macedonia, and look forward to welcoming her back to the neighborhood in just a couple of weeks.  And while democracy may bring more change over the weekend, I know that Mary and I will get another summer to count our swims and bask in the Greek sun.  And yes, I know from the press that the secret is out that we spent this weekend enjoying the beautiful beaches of Halkidiki and the most rich variety of fish I’ve found anywhere in all of Greece.

But in the midst of all these changes, I think it’s important to emphasize what will not change: the lasting commitment of both the United States and Greece to deepening our bilateral relationship.  I was in Washington last month, and I’m happy to report that stock in the U.S.-Greece relationship is higher than it’s ever been, and there’s a broad consensus in Washington that Greece has become one of our most valued and important regional allies.

The momentum that we have built in this relationship, including through the Thessaloniki International Fair and countless other engagements, and our efforts now to institutionalize that relationship through our annual Strategic Dialogue demonstrate that continuity and that commitment.  And up here in northern Greece, we are incredibly proud of what Greg and the Consulate team have managed to accomplish.  And I know you all would agree that Greg has had a fantastically successful first year as Consul General, and the months ahead promise to be even more important.

With the completion of the Trans Adriatic Pipeline, the recent ground breaking for the Greece-Bulgaria Interconnector, and steady progress on the Alexandroupoli FSRU and pipelines to North Macedonia, this region of Greece is becoming a crucial crossroads for European energy security and diversification, and a site for major long-term investment.

Privatization of the port of Alexandroupoli and other transport infrastructure will benefit both the Greek economy and our strategic relationship, aiding deployments into Central and Eastern Europe for multinational exercises like the ongoing Saber Guardian.  These military rotations through northern Greece as well as the many defense visits we’re expecting this summer demonstrate the strategic importance of this region to our mutual defense and security.

But the foundation for all that we’ve accomplished, the threads that weave our nations together, are the relationships that we’ve developed with all of you, our guests tonight.  Thessaloniki is a vibrant student city, and as I’ve discovered, its educational institutions are among our strongest and most valued partners.  Our friends at Anatolia and Pinewood, and the American Farm School, Aristotle and Macedonia Universities, are building the next generation of Greek leaders, and your care and your nurturing ensures that their future will be bright.

So before we enjoy the blues band and all the barbecue that Greg has promised me in exchange for not wearing a tie tonight, please join me in raising your glasses in a toast to our relationship with northern Greece and the 243rd anniversary of the United States of America.