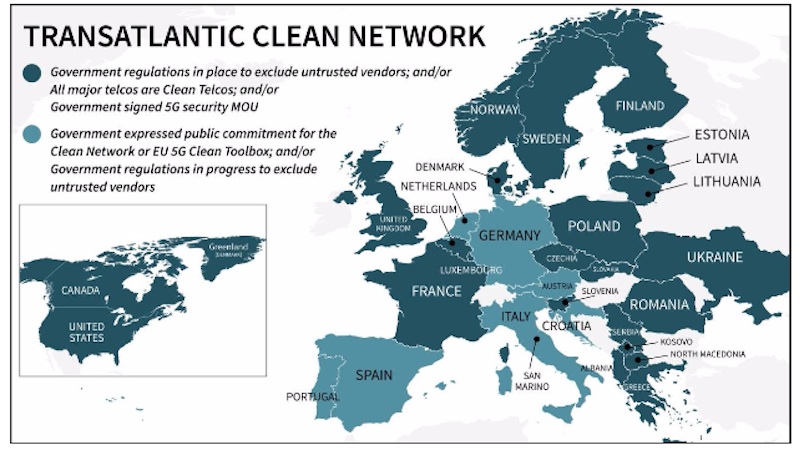 We issued a joint statement with the EU on the synergies between the Clean Network and the EU 5G Clean Toolbox. Since adoption of the Toolbox meets the criteria for being part of the Clean Network, the two work well together.NATO’s Deputy Secretary General has also emphasized the importance of having a 5G Clean NATO Network. I was glad to hear that.”
–Secretary of State Michael R. Pompeo, 10/14/20

“The 5G Toolbox serves as a reference for telco operators’ board of directors, who are required to make the decision on 5G suppliers. If they choose a high-risk 5G supplier and something happens, the board members may be liable.”
–EU Commissioner Thierry Breton, 9/30/20

It is important to have a secure 5G Clean NATO Network, which is non-fractured, because the Alliance is only as strongas its weakest link.
–NATO Deputy Secretary General Mircea Geoana, 9/30/20

“Countries and companies are terrified of China’s retaliation.The CCP cannot retaliate against everyone.That is where the EU comes in, the Transatlantic Alliance comes in, NATOcomes in. The bottom line is the tide has turned. Countries and companies now understand that the central issue is not about technology, but TRUST.”
–Under Secretary of State Keith Krach, 10/1/20

“Countries and companies are terrified of China’s retaliation.The CCP cannot retaliate against everyone.That is where the EU comes in, the Transatlantic Alliance comes in, NATOcomes in. The bottom line is the tide has turned. Countries and companies now understand that the central issue is not about technology, but TRUST.”
–Under Secretary of State Keith Krach, 10/1/20

Since Secretary of State Pompeo announced the Clean Network and the European Union launched its EU 5G Clean Toolbox earlier this year, 40 Clean Countries, and 50 Clean Telcos, including the largest telcos like Reliance Jio in India, Telstra in Australia, SK in Korea, NTT in Japan, Hrvatskiin Croatia, Tele2 in Estonia, Cosmote in Greece, Three in Ireland, LMT in Latvia, Ziggo in the Netherlands, Plus in Poland, TDC in Denmark, O2in the United Kingdom, Singtel,Starhub, and M1in Singaporeandall the major telcos in Canada, Japan, Luxembourg, U.S.,and Taiwan have joined the Clean Network. Industry leading companies like Oracle, HP, Reliance Jio, NEC, Fujitsu, Cisco, NTT, SoftBank and VMware have also joined the Clean Network and have rejected doing business with tools of the CCP’s surveillance state, like Huawei, which has caught the world’s attention. EU Commissioner Thierry Breton along with Under Secretary Keith Krach integrated the EU 5G Clean Toolbox as part of the Clean Network and issued a joint statement highlighting their commitment to shared principles on 5G security and the synergies between the EU 5G Clean Toolbox and the Clean Network. NATO Deputy Secretary General Geoana has also emphasized the need for a secure 5G Clean NATO Network and noted that 25 of the 30 NATO Allies have committed to being Clean Countries.Now 25 NATO Allies have committed to being Clean Countries on both sides of the Atlantic, and joined the wave toward allowing only trusted vendors in their 5G networks. Between September 21 and October 4, 2020, Under Secretary of State Keith Krach visited eight European countries, including EU and NATO headquarters, to discuss the growing momentum toward clean 5G infrastructure and the goal of building a Transatlantic Clean Network. After extensive consultations with government officials and private sector CEOs across Europe, it is now undeniable—the Transatlantic Alliance is in syncon 5G security.

The Clean Network and the EU 5G Clean Toolboxhave paved the way toward protecting citizens’ privacy, companies’ intellectual property, and countries’ national security from aggressive intrusions by malign actors, such as the Chinese Communist Party and its surveillance and data collection tools, such as Huawei.

The 5G tide has turned in Europe as the Transatlantic Alliance is securing its most sensitive information from malign actors, such as theChinese Communist Party and its surveillance state. The vast majority of EU, NATO, and other European countries are now united in the Transatlantic Clean Network. The United States calls on all our friends and partners to safeguard their national security by joining the Clean Network momentum.

Get more information on The Clean Network: https://www.state.gov/the-clean-network/

Read the Statement on the Importance of the EU and U.S. Partnership for Security Telecommunications Infrastructure by Under Secretary Keith Krach and EU Commissioner Thierry Breton: https://www.state.gov/statement-on-the-importance-of-the-eu-and-u-s-partnership-for-security-telecommunications-infrastructure/

Find out more about American economic diplomacy, headed by Under Secretary of State KeithKrach: https://www.state.gov/bureaus-offices/under-secretary-for-economic-growth-energy-and-the-environment/