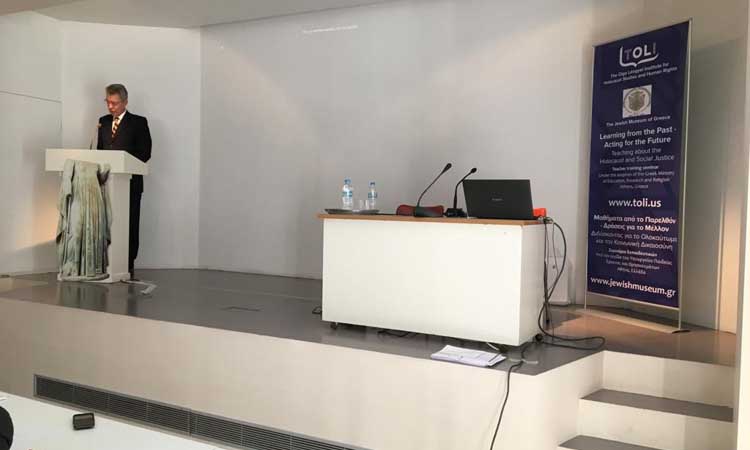 Good morning and thank you, Zanet, for inviting me to speak here today.

Before I get into the substance of my remarks, I want to say a brief word about what happened in the United States about a week and a half ago because as we gather today, we do so in the shadow of the heinous attack that took place at the Tree of Life Synagogue in Pittsburgh, Pennsylvania. It was the worst attack against the American Jewish community in the history of our nation.  There were 11 victims that died.  Among them was Rose Malinger, who at 97 was alive when the events that your seminar focuses on took place. We also learned that there was another individual, Judah Samet, who survived the Holocaust and was saved only because he was late arriving to synagogue that day.

The attack in Pittsburgh was an inconceivable tragedy, which sent all of the United States into mourning. Our nation’s leaders were quick to condemn the attack and the attacker, and to reaffirm the principles of religious tolerance that are fundamental to our democracy.

Our Secretary of Defense James Mattis called the attacker a “coward” and not a man by any definition we understand.  He also noted that the attack in Pittsburgh deeply affected us all, all of us “who believe in freedom of religion — one of our most fundamental rights.”

I therefore want to start by thanking the Greek Jewish community, and the Greek state, for standing with us during this difficult period in our history. It is in a tragedy that we see who our closest friends are, and this community is among our closest. I know our Embassy team was particularly touched by the memorial service that the Jewish community held on Saturday in honor of the Pittsburgh victims.

So, as we all look for some kind of meaning hidden in the great tragedy of Pittsburgh, I want to thank you, the teachers, for being here at this seminar. In your effort to teach the history of the Holocaust to future generations, you are working both to prevent tragedies like Pittsburgh and to create a culture of religious tolerance to combat hate.

Anti-Semitism and hate crimes are unfortunately far too common. We experience them in the United States, here in Greece, and globally, and we all must condemn them each and every time that they happen. And so your work as educators will always be relevant and critical in the effort to help all of us be better human beings. Your success and effectiveness is important to us all.

The history of the Jewish community in Greece is of particular interest to me. I have been fortunate to have had the opportunity on several occasions to appreciate the Jewish Museum here in Athens as well as the Museum in Thessaloniki, which was such an important center of life for Sephardic Jews before the second World War, and I encourage others to visit as well. And as Zanet and I were talking about, I also had a deeply moving visit to Ioannina this spring, where I was able to apply some of what I learned at the Jewish Museum of Athens to understand and appreciate the unique history of the Jewish Community of Epiros.

On Sunday I also had the opportunity to visit Kalavtryta and, for the first time, the moving museum and memorial there to the tragic events that took place in December 1943.  The faces of the many victims at the Kalavryta Museum were a reminder of the unspeakable horrors that Greece suffered through the Second World War – but also a vivid illustration of why it is so important to remember, and to teach about the hate filled Nazi ideology that brought Europe to such a dark place.

These museums are quality educational institutions that help us understand history so we are not doomed to repeat it; they show how Greek Jewry was so intricately woven into the fabric of Greek society and how its absence has had such a profound impact on the history of modern culture here.

For the past two years, I’ve also traveled to our Consulate in Thessaloniki for the David Tiano lecture, which is in commemoration of a former employee of the Consulate, a Greek Jew who was murdered during the Nazi occupation in 1942. In his honor we gather annually to listen to expert educators presenting the stories and the names of other Greek victims of the Holocaust, and we meet and talk to survivors that still remain in the Thessaloniki community.

I have also been very encouraged by the successful efforts of the Greek Jewish community, the Stavros Niarchos Foundation, and the governments of Greece and Germany, so that Thessaloniki will host a new Holocaust Museum and Educational Center in the near future.  This new museum will serve as a repository for the stories of the Jews who lived in Thessaloniki before World War II, and the atrocities they suffered under the Nazi regime.

The U.S. is very supportive of Greece taking a more visible and important role on Holocaust education internationally. In this regard, I would point also to the Greek government’s announcement that Greece would fund a museum in Auschwitz dedicated to preserving the memories of Greek Jews that died there.

The U.S. is also proud to work with Greece and 29 other countries on the International Holocaust Remembrance Alliance, and we will be represented this weekend in Trikala at the next annual commemoration here in Greece.

Last month, I was honored to travel to the U.S. during Greek Minister of Defense Kammenos’ visit.  During that visit, Minister Kammenos hand delivered a disk containing documents from the Greek Ministry of Defense directly to the U.S. Holocaust Memorial Museum, thus enabling the preservation of the government archives in Athens that document the unique history of Greece under Nazi occupation and the fate of its Jews.  Minister Kammenos and I also had the opportunity together to visit the new exhibit of the history of the Holocaust as seen in America, which I think for both of us was a vivid reminder that we too in America have work to do to teach and remember our history.

So, on behalf of the United States, I pledge to you our support for your efforts to educate the next generation of Greece on the Holocaust. And I share your commitment to stopping anti-Semitic acts and hate crimes everywhere in the world.  I want to express my deep personal gratitude to you for helping Greece take on a central role on Holocaust education and remembrance.

As American Holocaust survivor Elie Wiesel once said, “For the dead and the living, we must bear witness.”  This workshop, and your efforts in educating the next generation, are important contributions to fulfilling this directive.  So I want to thank you all again for the investment you are making in this seminar and wish you a very productive series of conversations.