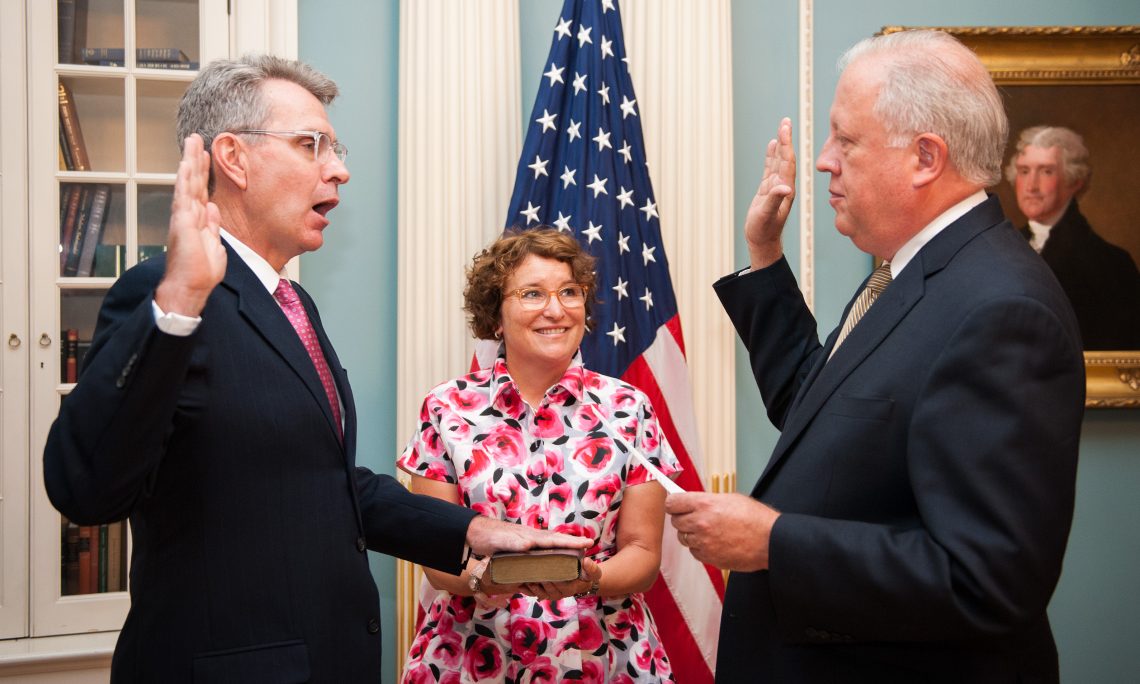 Thank you Under Secretary Shannon for those warm remarks, Ambassador Lalacos, Ambassador Negroponte, Ambassador Blake, and the many other friends, colleagues, and bosses who have joined us as Mary and I mark the beginning of this latest stage in our Foreign Service career.  I’d also like to acknowledge our many guests today from the Greek-American diaspora, which is such a vibrant part of our bilateral relationship.  And of course thank you most of all to Mary, who today also represents our kids who are working in Los Angeles, but are perhaps the most excited of all about our move to Athens.

A colleague once said that a second Ambassadorial swearing in, should you be so lucky, should be like a second wedding — you just go to the court house and get it over with.  But I couldn’t resist the honor of being back in these ceremonial corridors of the State Department, so I hope you’ll indulge me just a few public reflections.

Three years ago this winter I had the extraordinary experience of representing the United States in Kyiv as hundreds of thousands of Ukrainians across the country withstood the most fearsome challenges and put it all on the line to demand the universal principles of free speech, rule of law, and the democratic accountability of their elected leaders.  Like all my European colleagues, I could not help but be deeply affected by those remarkable days.

Now, I have the honor of going to Athens to lead the U.S. Mission in the country that gave birth to these core democratic principles.  I will move to Greece at a time of considerable challenge, but also with a profound and deeply personal appreciation for the democratic values we hold in common, which are, at the end of the day, the bedrock of our alliance with Greece.

I know I don’t need to convince anyone in this room of the value to the United States of European institutions or of the importance of Greece to Europe’s future.  What happens in Greece over the next few years matters greatly to the United States.  And one other thing that was driven home to me by my time in Kyiv is that, despite it all, the United States is still a powerful force for good in the world, with a tremendous capacity to inspire hope for the future and to lead us all towards a better world.

A few hundred yards from this room, the Parthenon of Athens provided the inspiration for our own Lincoln Memorial, designed by an architect who believed that the President who preserved American democracy should have a memorial based on a building from democracy’s birthplace.  At a time when some have questioned the relevance of those democratic values to our diplomacy, it is deeply humbling for me to represent the President and people of the United States in a country that has given the world so much, and has recently proven the resilience of its own democratic system through such trying and unforeseen circumstances.

At this stage it would be customary for me to thank all those who got me to this point, but if I did that, I might overlook someone, and it would take me a few days, in which case Mary and I would miss our flight to Athens tomorrow.  But I would like to mention three people.  The first is our Greece desk officer, Amy Reichert, who has been at my side throughout the confirmation and preparation process — someone whose energy and intelligence make me confident that the future of the Foreign Service is in very good hands.  Thank you, Amy.

Second is my Greek language instructor Ismini Petraki, who has been both a wonderful guide to Greek language and culture over the past month, and unfailingly patient with my unintended habit of dropping Ukrainian words into otherwise intelligible Greek sentences.  Ευχαριστώ.

And finally, Assistant Secretary Nuland, who led our team in Strobe Talbott’s office during a formative stage of my Foreign Service career nearly a quarter century ago — and now courageously leads the charge in the U.S. effort to achieve a Europe whole, free, and at peace.  In this regard, Toria also represents the many bosses and mentors who have generously shown me over the years what it means to advance the interests of the United States abroad, and how best to mobilize our people and resources to that end.  Some of you are here today — but many are not.  I hope that my service in Greece over the next few years will live up to the investment and trust you have all placed in me — and I hope I’ll see some of you in Athens.