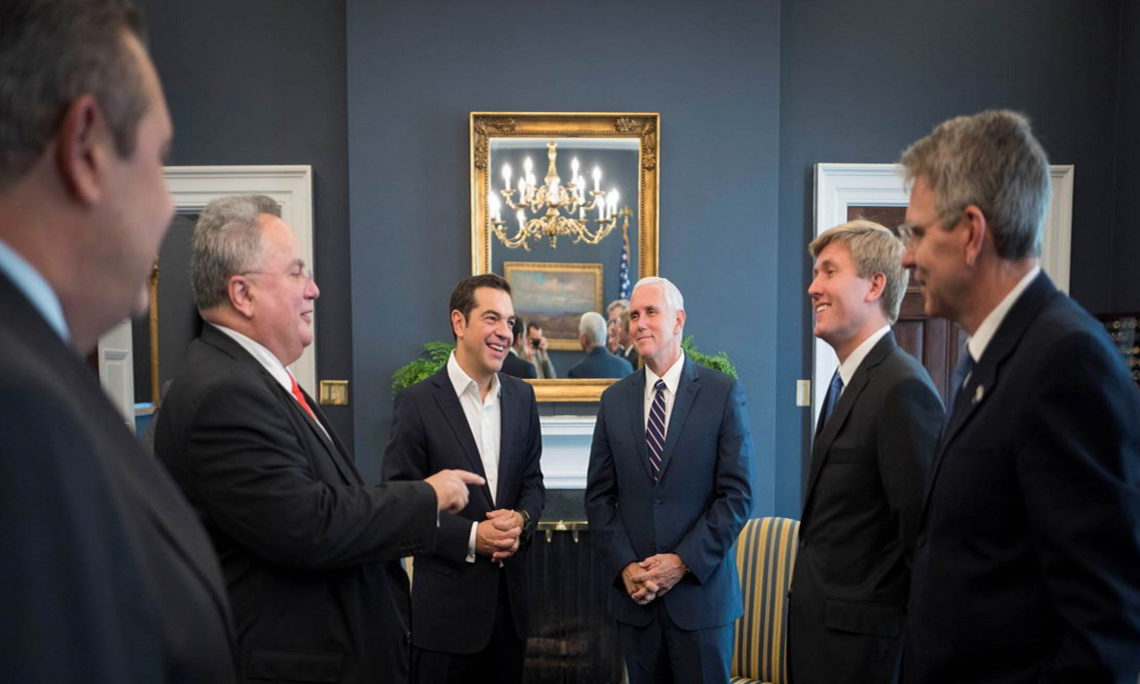 Throughout this past week as I traveled from Chicago, attending a series of substantive discussions with lawmakers, business leaders, and representatives of the diaspora, and then to Washington, where our leaders had the chance to sit down in several different formats, I understood more and more how deeply Americans and Greeks appreciate and respect one another.

Our entire bilateral relationship is based on deep and mutual appreciation as well as on our shared democratic values, and on a strategic interest in the future.  From our visit to the incredible 1871 Chicago incubator, where we encountered American technology, enterprise and innovation first hand to the fresh fall weather in the Rose Garden as Prime Minister Tsipras announced that Greece is back, the visit was a resounding success.

First, President Trump delivered a strong message of continued U.S. support for Greece, pledging that we will continue to stand with Greece as it recovers and exits eight years of economic crisis.  He said unequivocally, “I have totally reaffirmed our support for a responsible debt-relief plan,” and our two leaders created an investment working group led by our Secretary of Commerce and the Greek Minister of the Economy. We are also looking at our role as the 2018 Honored Country at the Thessaloniki International Fair as a concrete symbol of our economic support, and both  leaders mentioned its importance to advancing our economic relationship.  It is the largest trade and investment fair in the Balkans, and is hosted in Thessaloniki, a city with a history as a crossroads of civilizations located in Greece’s strategic north.  In his remarks in the White House Rose Garden, President Trump recognized TIF as an event for the U.S. to showcase its technology, enterprise, and innovation, and looked forward to sending a high-level delegation.

Second, we committed to upgrading our established defense relationship.  Greece continues to meet its obligations to NATO and to be a leader in the region.  As President Trump announced, we agreed on a way to modernize and upgrade Greece’s fleet of F-16s over the next ten years that supports our mutual interests: not only keeping Greece’s fleet up-to-date and ready to promote regional security, but having a positive impact on both our economies.  We also agreed on the crucial importance of advancing our common regional defense strategies, embodied in the mutually supportive air and maritime facilities located at Souda Bay.  This year, we will continue to hone our skills together in Greece’s premier multinational exercise Iniochos, which brings together multiple nations throughout NATO, Europe, and the Middle East.  Additionally, personnel from US European Command will continue to work in Greece on combined exercises and training events at both the NATO Maritime Interdiction Operational Training Center and at the NATO Missile Firing Installation Centers, both in Crete.

Third, we reaffirmed, at the highest level, a vision for our partnership.  This vision includes Greece as an energy hub, allowing diverse sources of oil and gas into the region.  President Trump expressed his appreciation for Greece’s contributions to regional energy security, including its support for the Trans-Adriatic Pipeline and the Greece-Bulgaria Interconnector, as well as the development of LNG facilities, which will allow Greece to bring new sources of liquefied natural gas (LNG) into Europe, including from the U.S.  This vision includes Greece as a regional leader, continuing to partner with the United States in support of a Euro-Atlantic course for the Balkans and Turkey.   At the highest level, the U.S. government endorsed Greece as a pillar of stability in its region and welcomed a strong Greece engaging in the Balkans, the Eastern Mediterranean, and beyond.  We will continue to work with Greece as it confronts current challenges, such as the migration crisis, as well as long-standing challenges, such as establishing a bi-zonal, bi-communal federation in Cyprus.  The President also reaffirmed his great confidence in Greece as a nation and as a reliable ally for many years to come.   The conversation the Greek government had with the Vice President on October 18 reaffirmed this strong message of support and vision for our future, enhanced partnership.

As U.S. Ambassador to the Hellenic Republic, I am honored to have this opportunity to continue the important discussions begun in Washington this past week and to enhance our already strong partnership.  I am looking forward to TIF 2018 and to the many possibilities it brings to our economic partnership.  I look forward to finding ways to make Greece stronger in its role as a pillar of regional stability and in finding ways to expand our defense and security cooperation, all of which will help to make this region a safer and more peaceful place.  I look forward to my continued work with Greece, one of our most steadfast and reliable allies.