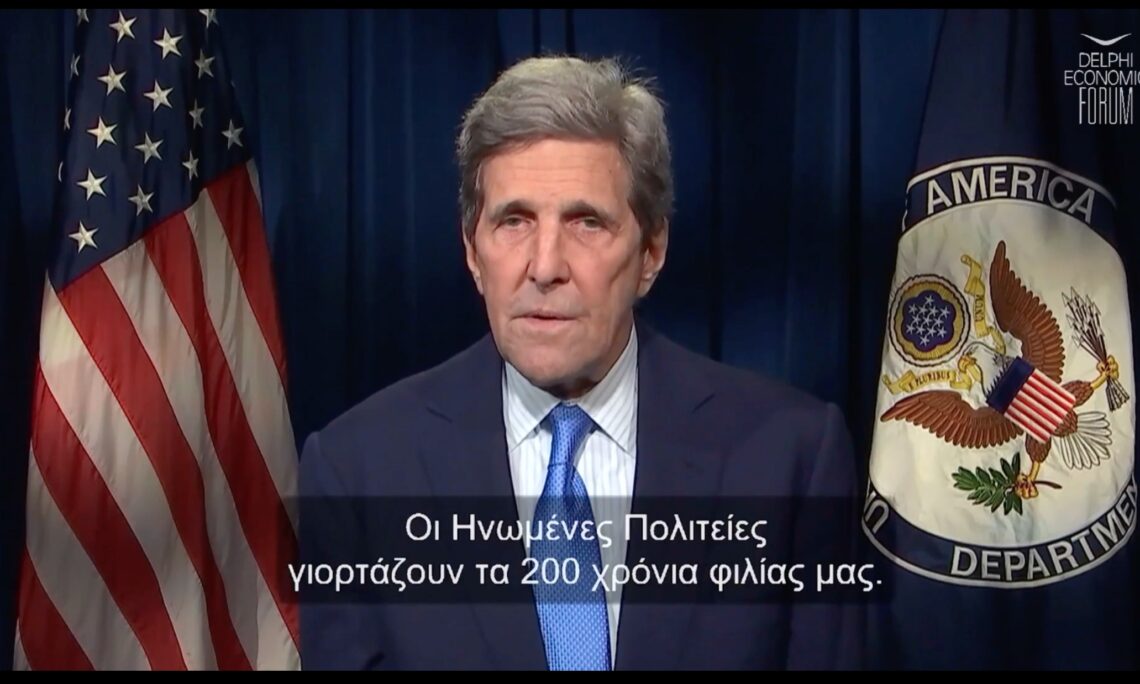 Thank you, Cheryl, for the introduction, and thank you to the Delphi Forum for having me.  I’m sorry I couldn’t join you all in person at this year’s gathering, especially since Ambassador Geoff Pyatt had described the forum to me as Davos with olive trees.  It’s great to be joining virtually, though, especially as Greece commemorates the bicentennial of the Greek Revolution, which, as we know, is a special moment for the United States as well since our two revolutions were intertwined.

The United States celebrates our 200 years of friendship.  I know the U.S. Embassy is sponsoring a panel at the forum to discuss the role of philhellenes in the revolution.  It’s a topic of personal importance to me, as my own great-great-great-grandfather, Thomas Lindall Winthrop, was a great philhellene and chair of the Philhellenic Committee of Boston and its work in supporting the revolution.  So, congratulations to the people of Greece on this historic year.

I was pleased to hear that the forum organizers made sustainability and climate change one of the pillars of this year’s gathering and have dedicated part of today’s discussion to a climate program.  But I’d also argue that the climate crisis is integral to many of the other themes that you’re all discussing this week: geopolitics and security, the global economy, the future of Europe, people organizations and society, the future of technology and sustainable Greek growth.  The climate crisis is inextricably linked to every single one of those issues, and it would be impossible to make progress on those issues without addressing the climate crisis.

What the scientists are telling us, though, is that what we are currently doing to address the climate crisis is just not enough.  It’s not getting the job done.  If we want to avoid the most catastrophic consequences of the climate crisis, we need to limit the Earth’s warming to no more than 1.5 degrees Celsius.  That’s what the scientists and experts tell us.  But where we are today, even if everyone in the world—national governments, multilateral institutions, companies—even if they all hit their existing targets on climate, and they do so on time, that will still not be enough to hold the global warming to only 1.5 degrees.  The fact is that it is possible to hold it there.  We can do it.  And the doing of it is critical.  But it could mean that all of us, not just governments, but individuals, institutions, private companies, banks, everyone, must do more.  We have to set more ambitious goals, and we have to do so urgently.  And we have to act on them.

That was why President Biden convened the Leaders Summit on Climate last month: to get the leaders of the world’s major economies to set out how we are in fact going to get this done.  President Biden knows that the stakes on the climate crisis have never been as high as they are today.  What happens in this decade will determine whether or not we can keep the global warming to our target of 1.5 degrees.  And that means commitments that we make this year, in this decade, are critical.

That’s why, just after being sworn in, President Biden rejoined the Paris Agreement and signed a series of executive orders to direct the U.S. government to take bold action at home and abroad in order to tackle this crisis.  That’s why, at last month’s summit, he announced a new and more ambitious emissions target.  For the United States to do our part in keeping the Earth’s temperature rise to no more than 1.5 degrees Celsius, the United States will reduce our greenhouse gas pollution by 50-52% economy-wide over these next ten years.

We welcome the EU’s move to put more ambitious European targets into law ahead of the Summit, and I was pleased to see Greece during the ministerial roundtables at the Summit showcase its commitment to becoming a clean energy leader.  By the end of the Summit, we saw new commitments from countries that put 55% of the world’s GDP, 55% of the world’s economies, on track to keep the earth’s warming to no more than 1.5 degrees Celsius.  But, my friends, we still need the other 45% at the table, especially those in Asia.  We need more than just government commitments.  The fact is that government action alone is not going to solve this crisis.  That’s why, ahead of the Summit, we worked with six leading U.S. banks to pledge to mobilize $4.15 trillion of capital by 2030.  We also secured commitments from the three largest U.S. asset managers to move the $19 trillion in assets that they manage into a low-carbon status by 2050.

But we still need more, and we need all of you to help.  The Summit was a first step, and as we prepare for the UN Climate Conference in Glasgow in November, and in the years ahead, we’re going to need to work closely with our partners.  Thankfully, we do have great partners.  In Greece, especially, under Prime Minister Mitsotakis and Minister Skrekas and their leadership.  And we also have great partners in Europe.  Greece is proving, in fact, to the world how individual countries can aim higher, how they can do better, and even, how they can exceed their Paris commitments.

Greece was among the first to support the EU’s revised agenda to cut emissions, and I commend Prime Minister Mitsotakis’ decision to retire all lignite-fired power plants years ahead of schedule.  It’s also great to see Greece positioned to be among Europe’s major generators of wind and solar power.  The United States is generally proud to work with Greece on a range of climate-related issues.  I couldn’t be happier to see U.S. companies bringing American technology and expertise to the Greek clean energy market, and to see U.S. investments in Greek wind energy, electric vehicle companies, sustainable supply chains, and circular economies creating jobs and prosperity for both Greeks and Americans.  I commend Greece for leading a new initiative on protecting our cultural and natural heritage from the impacts of the climate crisis.

Our new bilateral Science and Technology Agreement with Greece sets the stage for even more collaboration in climate science and environmental fields.  The agreement allows us to more easily launch joint research initiatives and to convene experts from our governments, from academia, and the private sector.  The cutting-edge solar PV research being done in Greek universities is just one promising example, and as Greece explores new frontiers such as low-carbon hydrogen and decarbonized shipping, the opportunities for U.S.-Greece collaboration will expand even further.

When I talk about climate, I use the term crisis in order to underscore the urgency of action.  But, my friends, it is not just an image or a prospect of a future of doom and gloom.  This is doable.  And it’s not only doable, but it’s one of the world’s greatest opportunities for partnership and for prosperity, as our work with Greece demonstrates.  It is in fact, I think, the biggest economic transformation staring us in the face that we have seen since the Industrial Revolution.

Before I conclude, I’d like to just briefly touch on the economic opportunity that this moment presents.  The UN report on finance estimates we need $1 to 2 trillion globally, every year, to deliver on our climate goals, just for the energy transition.  If you consider the needs for other sectors, then it really does become clear that we’re going to need to capitalize trillions upon trillions of dollars in the years ahead.  This is indeed the greatest market opportunity since the Industrial Revolution.  But it is also an opportunity that has to be seized.  We know that those who act first will be best positioned to benefit, and we need, therefore, to focus on this new economy like a laser.

So, in closing, I would ask all of you to consider, what more can your organization, your industry, or your government do to resolve the climate crisis?  How can we work together to make tangible net-zero commitments?  Because the United States government obviously can’t do this alone.  No country can.  This is going to require a global, all-of-society effort.  If we’re going to successfully resolve the climate crisis, we will need your innovation, your leadership, your partnership, and we look forward to sharing that together.  Thank you.