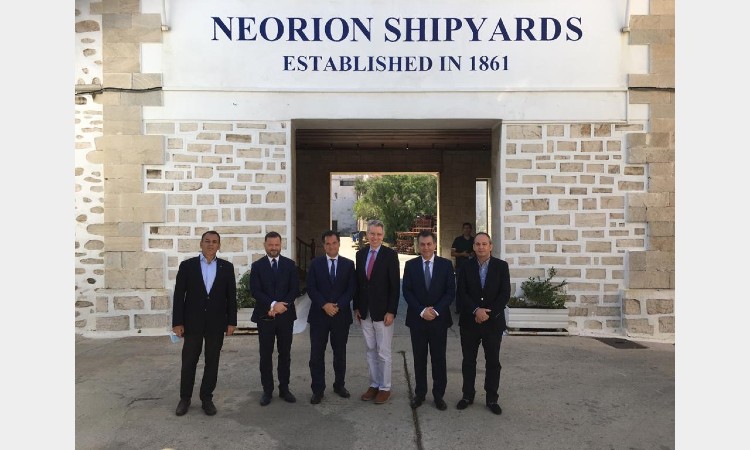 Friends, colleagues, and collaborators from the government of Prime Minister Mitsotakis; we have representatives of the Metropolitan and the Bishop here.

This truly is a miracle for me to see the resurrection of the Neorion Shipyards.  Exactly three years ago, Kosta and I were here at Neorion.  We saw what was described in the slides that you saw of an asset that was defunct.  Today with the benefit of American investment but also with a lot of hard work by the Ministers here in this room, and in particular Minister Georgiadis, this asset has come back to life.

I said yesterday in my comments with Minister Panagiotopoulos at the AmCham that American strategy for the Eastern Mediterranean is premised on the principle that a stronger and more secure Greece is good for American interests, and part of that strength is the economic resilience, and the strength of the maritime sector, where this country has such long traditions.  I mentioned to Minister Panagiotopoulos, I remember from my first visit two years ago, walking into the Mayor’s office in City Hall and seeing the painting there from 200 years ago, when you had British, French, and other Imperial Navy warships being serviced here in Syros, and it was a reminder of how long the maritime shipbuilding tradition here is on the island of Syros and how important this shipyard is to the island’s identity, but also to Greece’s identity as a seafaring country. We have seen enormous progress here, and I’m really delighted to be back today with the Ministers because we see the template here in Syros, as Panos said, providing a very important preview of what the United States government and the government of Prime Minister Mitsotakis are committed now to working jointly to achieve also at the Elefsina Shipyards.  I noted to Minister Panagiotopoulos that this shipyard is now certified by the U.S. 6th Fleet, by the U.S. Navy, for the maintenance of U.S. military vessels.  We see a very important national security interest in the strengthening of the capacity to service both American and Greek military vessels here in Greece, including through Neorion, but also in the not-so-distant future at Elefsina. I also want to congratulate the workers of the Neorion Shipyard.  It is fantastically impressive for me to see how the workers have pulled together to make this miracle possible over the past three years, Panos, and I very much hope that we will be able to see the same kind of success at Elefsina.  I also very much appreciated the briefing on environmental measures, because that is one of the advantages that American investment brings to Greece, is the highest standards of technology and environmental protection.  This is obviously something that the residents here in the beautiful Cyclades care about a lot. And finally, I would note that I’m especially pleased to be here because, unlike all of my other visits, this time my wife insisted that if I was coming back to Syros, we would spend a weekend.  And I know the Ministers have to get back to work, but when work is done here today, I will spend the weekend in this beautiful corner of the Cyclades, one of the most spectacular parts of the world, and it’s an opportunity to draw attention to the fact that Greece and the Mitsotakis government has been so successful in its battle against this global pandemic that we’re able to take advantage of opportunities here in the Cyclades to enjoy something that feels a little more normal. So again, thank you Panos for hosting us together.  My deep gratitude to all four Ministers.  You all represent sectors of the Greek economy and the Greek government that are fantastically important to my government, and I’m especially pleased today to be joined by Minister Panagiotopoulos at a time when our defense relationship is growing from strength to strength and when we have enormous hopes for the further deepening of an already strong defense, technology, and coproduction relationship to include the critical maritime sector.  So, ευχαριστώ πολύ and thank you very much.