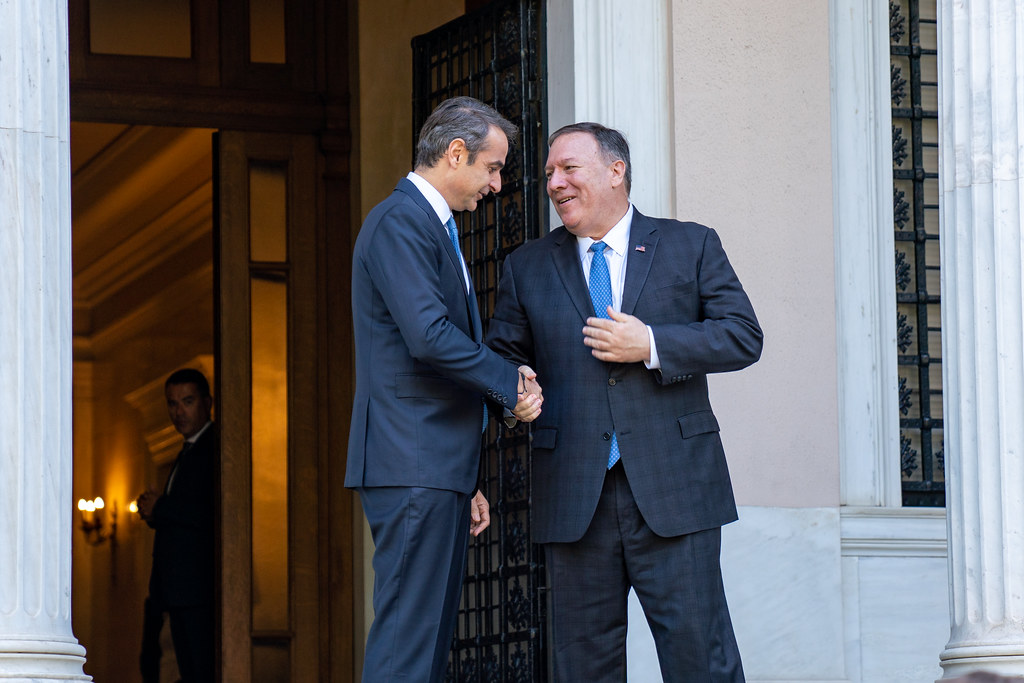 PRIME MINISTER MITSOTAKIS: (Via translation.) Dear Mr. Secretary of State, it is a great pleasure to welcome you here today at the Maximos Mansion on the occasion of the second round of the strategic dialogue between our two countries, a milestone in the process of strengthening our ties even further.

I came back only a week ago from the United States, where I had the chance not only to participate in key events at the United Nations, but also to meet Trade Secretary Ross, an old and good friend of Greece. We discussed prospects of our economic relations and I presented in detail business opportunities that arise in Greece.

It was also particularly interesting to take part in discussions at the very vibrant think tank community in the United States. And, certainly, the contacts that I had with the dynamic Greek American community were a strong reminder of the very close bonds of unity between the two countries. Bonds of principles and common paths.

The relations between our two countries were built upon the common values of freedom, democracy and respect for human rights; they were shaped through joint fights in the two World Wars and took form in the hundreds of thousands of Greeks who chose the United States as their second homeland. The celebrations commemorating 200 years from the Greek War of Independence, in 2021, will serve both as a reminder and a milestone for further enhancing the deep-rooted historic, political and cultural relationship.

I am particularly happy that your visit, Mr. Secretary, comes early on, only three months after the new government in Greece came in office. It coincides with the mandate that was given to us by the Greek people to shape a new course for Greece, leaving behind the difficult times of a multifaceted crisis, looking to the future with optimism and confidence. After ten years of economic hardship, which took a significant toll on the Greek society, we are steadily proceeding towards economic recovery. Under conditions of political stability we have already taken measures to lift capital controls, we are alleviating corporations and citizens from the high tax burden, we are reducing the red tape for companies, promoting privatizations and instituting special incentives to attract investment.

Our talks in Athens these days span across a wide array of areas of common interest. They include the sectors of defense, the economy with a special focus on energy, tourism and trade, as well as cultural relations. They form an integral part of our strategic partnership, which we are determined to further strengthen.

We have agreed on the update of the Mutual Defense Cooperation Agreement, which will enhance our common military and strategic footprint in the area, always to the benefit of regional security and stability. Even more so when in the Aegean Sea and the Eastern Mediterranean moves are taking place which challenge the sovereign rights of Greece and Cyprus, violating international law and often accompanied by an extreme and counterproductive rhetoric.

I am referring, Mr. Secretary, to the actions of neighboring Turkey, which often do not align with the policies of friendship and cooperation that Greece maintains. The European Union has already officially taken a position on these developments. Recent moves by Turkey in Block 7 of the Exclusive Economic Zone of the Republic of Cyprus blatantly violate the sovereign rights of Cyprus. The United States has a special interest in the Eastern Mediterranean region. Cyprus only asks for the obvious, the implementation of international law. I expect the positive contribution of the United States, which will eventually lead to the creation of a more constructive and productive environment in the region.

Our partnership, however, is not only about foreign policy and defense. I particularly welcome that more and more American tourists are visiting Greece; that scholarship programs and students’ exchanges have intensified; that Greece is fully reinstated in the Visa Waiver Program; that our economic ties are improving on a steady basis.

The acquisition of the Syros Shipyards by ONEX, and, more recently, the strong interest of Pfizer and Cisco to invest in the pharmaceutical and technology sectors in Thessaloniki and the great interest of U.S. companies in the Hellinikon Project are a vote of confidence to Greece, its economy, and its highly skilled labor force. Finally, I would be remiss if I did not mention energy cooperation, including on LNG but also hydrocarbon exploration, having in mind the participation of ExxonMobil in international consortia active off of Crete.

I am delighted to welcome you, Mr. Secretary, and open together this new chapter in our long common journey. Welcome.

SECRETARY POMPEO: Thank you very much. Well, thank you, Mr. Prime Minister. Thanks for welcoming me. It’s great to be with you all. It’s wonderful to be in Greece. There are great things going on. We’re down to today 90 or 89; it probably feels like 108 to you all because I know you’ve been working hard, and we can see the results of that. Today the relationship between our two countries has truly never been stronger, and I am very confident we can continue to grow that as we lead the way forward together.

Prime Minister, you mentioned some of the economic activity that’s undertaken already as a result of you unleashing the private sector to go invest, to grow, and to take risk and to create jobs here in Greece. We see this too. When I talk to American businesses, they can see the transformation that’s taking place. They can see the opportunity. You mentioned pharma, you mentioned energy, you mentioned high-tech. We’ve got companies from all across the United States commercial sectors who are anxious to identify opportunities and to come help grow the economy here in Greece, and make money for themselves as well.

That economic pillar is part of the Strategic Dialogue that we’re here to be part of, but there’s also the fact that Greece can play an important strategic role here in the region. This is a dynamic region with lots going on. There’s lots of change taking place and we are very confident that together, we can work to ensure that Greece can be a pillar for stability in this region. You mentioned the mutual defense cooperation agreement. We think that’s very important and we think it’s important as a security matter for our two countries to work closely together, but we think there are important political and economic positive outcomes from that agreement as well.

Two last thoughts I have. First, I look forward to talking to you about all these issues between the United States and Greece. I’m confident that we can together resolve many of the challenges. And finally, you talked about the deep, historic relationship between Greece and the United States. I represented south central Kansas; there was a big Greek community there. I am confident they’re happy to see me here. (Laughter.) I’m confident they’ll make sure I get it right, and if I don’t, I’ll hear from them too.