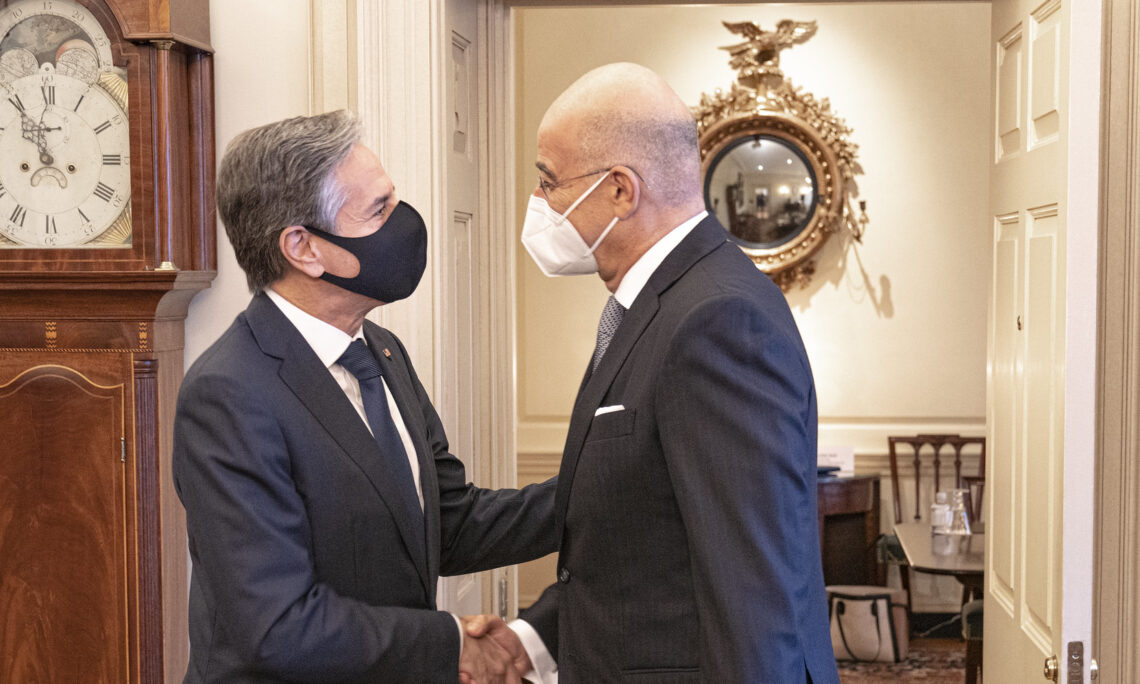 SECRETARY BLINKEN:  Well, good morning, everyone.  It is good to see everyone here, and it is especially a pleasure for me to welcome our friends here today from the Hellenic Republic of Greece for the third U.S.-Greece Strategic Dialogue.  Nikos, to you, to all of your colleagues, again, welcome.  It’s so good to have you here.

This strategic dialogue is a signal of our shared commitment to deepen our partnership on the most urgent challenges that are facing both of our countries but also the entire region and, in many ways, the world.  And that’s because we believe that, together, Greece and the United States can become an even more powerful force for peace, for prosperity, and for human dignity.  Because fundamentally that is what we both stand for.

This dialogue is an example of how close the friendship is between our countries, and how much we value each other.

When the founders of the United States, after hundreds of years of monarchies, sought to create a new form of government, they looked of course to ancient Greece, where democracy was invented.  It’s hard to imagine something as intrinsic to humanity as democracy being invented – but it was, and it happened in Greece.

And I think this is particularly resonant today when in many ways the – as President Biden has said, one of the central challenges of our time is to remind and demonstrate that democracies can effectively deliver for their citizens.  And I think the United States and Greece together need to be working to demonstrate that proposition.

When modern Greece sought its independence 45 years after American independence, Americans who proudly declared themselves “philhellenes” supported the cause.  So maybe that was some payback for the inspiration that we got from ancient Greece.

And this year, as the world celebrates the 200th anniversary of Greece’s independence, Greece and the United States stand together again as sister democracies – strong advocates for the rule of law, for human rights, deeply committed to ensuring that our governments and our economies actually deliver results, actually deliver opportunities for our people.

And that’s what the Strategic Dialogue is also all about, and is designed to help us do.  It covers regional, political, and economic cooperation; defense and security; energy and climate; trade and investment; law enforcement and counterterrorism; humanitarian challenges, disaster response; and maybe at the heart of everything, people-to-people ties.

I’m very confident that our delegations will make progress across all of these areas – aligning our views, and driving concrete, common action.

I’m particularly delighted that today, the foreign minister and I will sign an amendment to the Mutual Defense Cooperation Agreement between our countries, two proud, strong NATO Allies, both deeply committed to our Alliance.  This update will allow the agreement to remain in force indefinitely, and it enables U.S. forces in Greece to train and operate from additional locations. We’re strengthening our defense cooperation today, and I want to thank everyone from the Greek Government, from the U.S. Department of Defense and the State Department who worked hard to negotiate the amendment over the last few months.

And I also just want to express, Nikos, to you and to your colleagues my country’s profound gratitude to Greece for being such a strong and reliable ally to us, particularly in Afghanistan, where Greek forces fought bravely, and now Greece has welcomed a number of prominent Afghan women who left Afghanistan, including members of parliament, judges, lawyers, and their family members.  More broadly, Greece has been a pillar of stability in the region and an advocate for democracy, for European integration, and robust transatlantic ties, all of which make us stronger.

I’m also pleased that, in the aftermath of last summer’s terrible wildfires in Greece and much of southern Europe, we added humanitarian challenges and disaster response to the Strategic Dialogue.  In the face of the climate crisis, disasters like this are likely to happen more frequently, with greater intensity, and it’s critical that our countries work together to respond to the climate crisis, to reduce our emissions significantly, to build our climate resilience, and coordinate our humanitarian response in the aftermath of climate-induced disasters.

This dialogue is between our governments, but the friendship that unites us, the friendship between Greece and the United States is, of course, much broader than that.  It actually lives in the hearts of our people.

Millions of Americans are blessed with Greek heritage.  Millions more have made unforgettable journeys to Greece, to experience the legendary Greek hospitality for themselves.  Every day, Greeks and Americans work and study together, engage in trade and commerce, enjoy each other’s food and culture, even cheer for the same sports teams.  There’s, I think, a basketball player for example known to just a few Americans for the Milwaukee Bucks who is now probably one of the most celebrated athletes, not only in our country but in the entire world, known to all simply as “Giannis.”  After he achieved the feat and championship thanks to his extraordinary talent and sheer hard work and determination, it’s just a reminder that his own trajectory here is like that of so many Greeks before him in America.

But for today, let me simply say, before turning the microphone over to Nikos, on behalf of President Biden, who, as you know – and I think this would be an understatement – he is a proud honorary member of the Greek community – thank you for being here.  Thank you for the so many years of partnership and thank you especially for renewing that even more strongly today.  So again, welcome.  Nikos, over to you.

FOREIGN MINISTER DENDIAS:  Dear Secretary, dear Tony, if I may say, it’s a great honor and pleasure to open along with you the third round of our Strategic Dialogue.  Our strategic partnership has reached an unprecedented level by enhancing cooperation in many areas, such as enforcement, counterterrorism, energy, economy, trade, culture, and people-to-people contacts.

The relevant stakeholders will address, later today, ways of expanding them even further.  The revision of the Mutual Defense Cooperation Agreement we will sign in a few minutes is symbolically and substantially the foundation of our long-term partnership.

We understand that the United States is increasingly preoccupied with challenges on other parts of the world, so, dear Tony, your commitment to Greece is greatly appreciated.  You are investing in strategic locations in our country.  Following the migrant crisis and the tensions in Eastern Mediterranean last year, they acquired increased importance.  You are underlining that the United States as well as Greece are firmly determined to mutually safeguard and protect the sovereignty and territorial integrity of its country against actions threatening to peace, including armed attack or threat thereof.

In the Eastern Mediterranean, where Greece is facing a casus belli, a threat with war if it exercises its sovereign rights and, I have to say, Greece is facing daily provocation.  Greece is committed to resolve disputes with diplomacy and always in accordance with international law.  Over the past two years, we have concluded agreements on the delimitation of sea zones with Italy and Egypt, and agreed with Albania to defer this issue to the International Court of Justice.  We very highly appreciate your firm belief that sovereign rights should be respected in accordance with international Law of the Sea, and we hope that all countries of the world will embrace this principle.

We stand ready and willing to work with them on this basis.  We have already established strategic ties with common partners and allies.  I’m happy that I met our Israeli counterpart yesterday, as you did, by the way, and I will be meeting my Emirati counterpart later today.  Greece, being the first southeast European country to join the European Union, has also an increased responsibility to ensure the integration of the Western Balkans to the European family so as to promote stability and prevent forces that want to turn the clock backwards to dominate this volatile region.

Recently, Greece concluded the security and defense agreement with our NATO Ally, France.  This agreement will contribute to enhancing our defense.  It will also contribute in enhancing the European pillar of NATO, which is very, very important, and towards a fairer burden sharing between the two sides of the Atlantic, because Greece is and will remain a fully committed ally to NATO.  We will strive to enhance relations between the European Union and the United States, as well as between the European Union and NATO, as part of our contribution to strengthening the transatlantic bond, which is the cornerstone of our foreign policy.

Last, but definitely not least, Greece, within the limits imposed by our size, will strive to contribute in addressing global challenges such as the pandemic and the climate change.  We have already donated almost two million vaccines, and we’re building bridges with partners across the globe, most notably with India and Australia, more recently with Latin America and Africa.  The world is becoming smaller, but the challenges are getting bigger by the day.  The only way to address them is by working together while respecting our fundamental principles, such as democracy and our common respect for international law.

Thank you so much.

SECRETARY BLINKEN:  I think we now have some work to do in signing the documents.  Thank you.  Thank you very much.

(The documents were signed.)

Thank you all.  (Applause.)