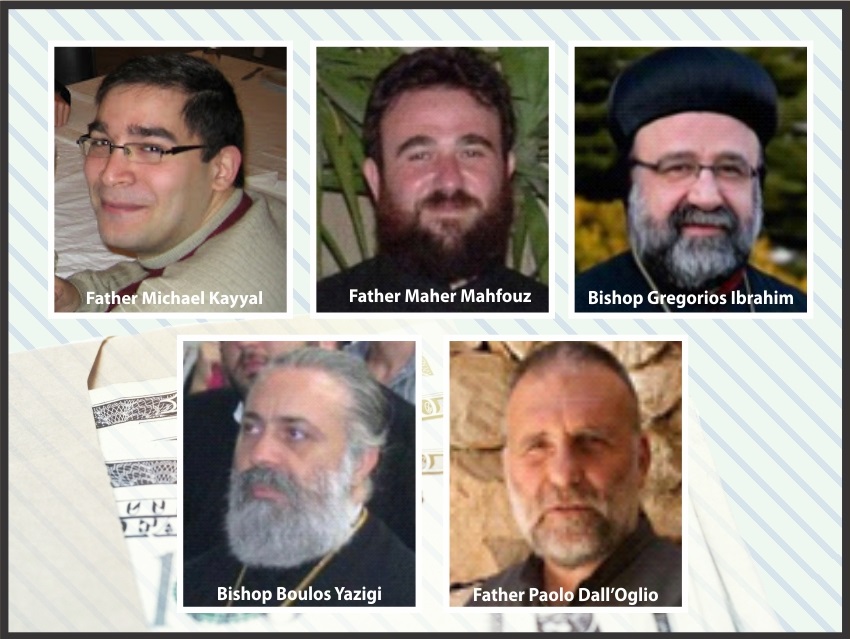 The U.S. Department of State’s Rewards for Justice program is offering a reward of up to $5 million for information on ISIS kidnapping networks or the people responsible for kidnapping Christian clerics Maher Mahfouz, Michael Kayyal, Gregorios Ibrahim, Bolous Yazigi, and Paolo Dall’Oglio. These rewards are being offered at an important moment in our fight against ISIS. The kidnapping of religious leaders demonstrates ISIS’ ruthless tactics and approval of targeting innocent individuals.

On February 9, 2013, Greek Orthodox Priest Maher Mahfouz and Armenian Catholic Priest Michael Kayyal were on a public bus traveling to a monastery in Kafrun, Syria. Approximately 30 kilometers outside of Aleppo, suspected ISIS extremists stopped the vehicle, checked passengers’ documents, then removed the two priests from the bus. They have not been seen or heard from since.

On April 22, 2013, Syrian Orthodox Archbishop Gregorios Ibrahim traveled from Aleppo, Syria to Turkey to pick up Greek Orthodox Archbishop Bolous Yazigi. When they reached a checkpoint near al-Mansoura, Syria, several armed men ambushed the archbishops and seized their vehicle. The clerics’ driver was later found dead. The archbishops are believed initially to have been kidnapped by persons aligned with Jabhat al-Nusra Front, an al-Qa’ida affiliated group; however, the archbishops were later transferred to Da’esh, also known as ISIS.

On July 29, 2013, ISIS abducted Italian Jesuit Priest Paolo Dall’Oglio in Raqqah. Father Dall’Oglio had planned to meet with ISIS to ask for the release of Fathers Mahfouz and Kayyal, and Archbishops Ibrahim and Yazigi. He has not been seen or heard from since.

ISIS remains a significant threat to the United States, as well as our allies and partners throughout the Middle East and around the world. We will continue to support our partners in Iraq and Syria in their efforts to defeat this terrorist threat, and maintain our cooperation with the global coalition to deny ISIS safe haven anywhere in the world. ISIS was established in 2004 by extremist Abu Musab al-Zarqawi as “al-Qaida in Iraq” or AQI. The group was later known as the “Islamic State of Iraq.”

ISIS recruited thousands of followers from across the globe to fight in Iraq and Syria, where ISIS members committed gross, systematic human rights abuses and other atrocities. ISIS members have conducted mass executions, killing and maiming of children, rape, human trafficking, and other violence directed at individuals and entire communities. ISIS was responsible for genocide against Yezidis, Christians, and Shia Muslims in areas it controlled, committing crimes against humanity and ethnic cleansing against those groups as well as Sunni Muslims, Kurds, and other minorities. In April 2013, Abu Bakr al-Baghdadi, ISIS’s current leader, publicly declared the Islamic State of Iraq was operating under the moniker of ISIS. In June 2014, ISIS, also known as Da’esh, seized control of portions of Syria and Iraq, self-declared a so-called Islamic caliphate, and named al-Baghdadi as caliph.  In recent years, ISIS has gained the allegiance of jihadist groups and radicalized individuals around the world, inspiring attacks in the United States.