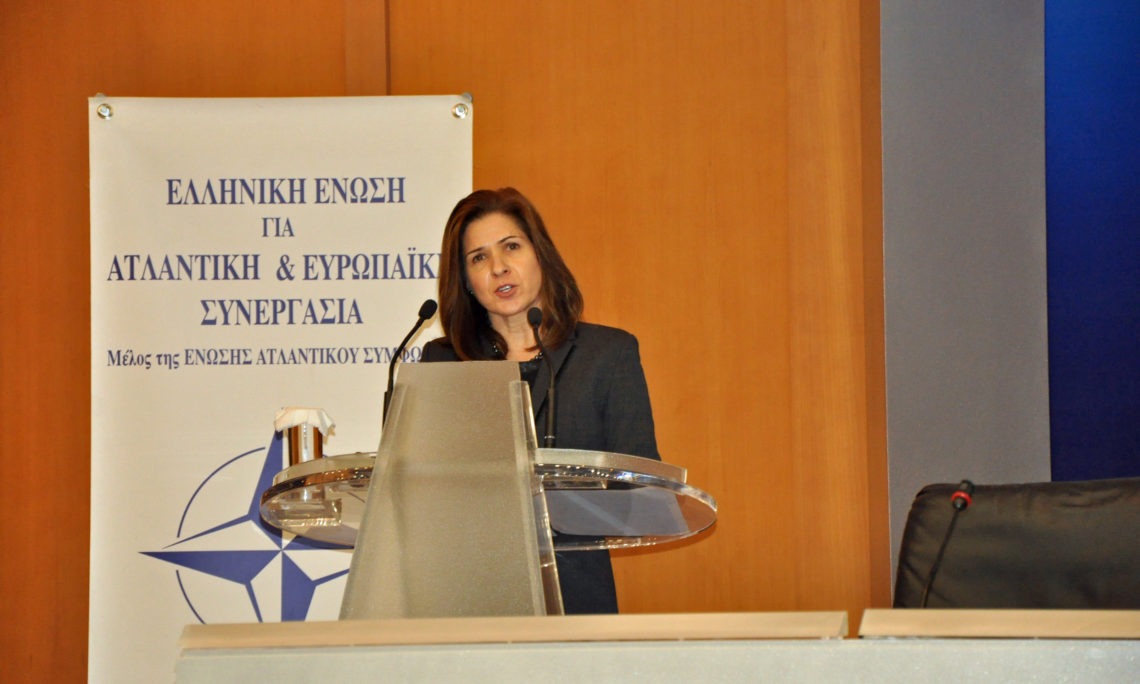 Good morning, and thank you Minister Pappas for hosting today’s event and for your opening remarks focused on the topic of digital security, something we’re all getting more and more focused on both bilaterally and through NATO.

Admiral Apostolakis, Ambassador Smith, distinguished guests, it’s an honor to be here to address some of the most pressing challenges facing our two nations, and I want to thank the Greek association for Atlantic and European Cooperation for organizing this conference and for fostering a dialogue on these important issues and, along with the Atlantic Treaty Association and NATO public diplomacy division, highlighting the importance of our Euro-Atlantic institutions.

The United States and Greece share a strong and enduring partnership based on mutual commitment to core democratic values, which are the foundation of peace and prosperity for Europe.  Prime Minister Tsipras’ recent visit to Washington underscores the importance of our alliance and reflects the value we place on Greece as a pillar of stability in this region.

In today’s world with the variety of threats we face, NATO continues to be the cornerstone of defense policy for Europe and for the U.S. This transatlantic alliance is our automatic starting point when we approach the most vexing challenges to global peace and security.

Terrorism, ongoing conflicts in the Middle East and North Africa, and unprecedented migration flows to Europe are the challenges that make the headlines we see every day.  Just as we can’t ignore these threats to our security, we also can’t face them alone.

As Secretary Tillerson reminded us recently in a major foreign policy speech ahead of the NATO ministerial “…under President Trump, the United States remains committed to our close relationship with Europe.  Our security guarantees to our European allies are ironclad…It is in America’s interest to work with allies and friends in Europe – and for those allies to be strong, sovereign, prosperous, and committed to the defense of our shared Western ideals.”

I want to share with you the U.S. perspective on the transatlantic relationship, as well as a few thoughts on where we see the priorities going forward. And since we are talking about the importance of multilateral cooperation, I also want this to be a conversation, so I look forward to your questions at the end.

Over the past ten months, the United States has embarked on a new strategic policy that bolsters European and American security: namely, a recommitment to Europe, a new effort to adapt security institutions to combating emerging threats like terrorism, cyberattacks, and nuclear proliferation; and an expectation that European nations accept they are more secure when they contribute more toward their own defense.

While the United States will continue to maintain our guarantees against a catastrophic failure of security in the region, and will continue to expend resources to maintain our protective umbrella, the nations of Europe must accept greater responsibility for their own security challenges.  On this score, Greece is playing a leadership role as one of still few countries that are both meeting and exceeding their national obligations to NATO, despite the severe economic challenges it has faced over the past several years. We are grateful for Greece’s commitment to what we see as the world’s most successful alliance. I think both our countries agree that our alliances must be made stronger in the current strategic environment; a lack of diligence and duty will only invite greater risk.

We will pursue even greater cooperation from and with the nations of Europe, our best partners.  History has shown that when we are united, we succeed in the face of shared challenges. Any attack, by any actor, on a NATO member state will trigger Article 5, and the United States will be the first to honor the commitment we have made. We will never forget how NATO members came quickly to stand with us after the September 11th attacks, and we will do the same for them if they are attacked.

The truth is, we don’t need to look far to find challenges to stability.  Within Europe itself, the conflict Russia instigated in Ukraine continues and people are still dying every day.  The United States position is clear: the violence must come to an end. We have repeatedly urged Russia to begin the path to peace by honoring its commitments under the Minsk Agreements. Any resolution of the war that does not entail a fully independent, sovereign, and territorially whole Ukraine is unacceptable. Minsk-related sanctions will remain in place until Russia reverses the actions that triggered them.

A demonstration of U.S. commitment to collective security is Atlantic Resolve, a series of Allied military actions designed to reassure NATO allies and partners of America’s dedication to enduring peace and stability in the region in light of the Russian intervention in Ukraine.

Since April 2014, the U.S. Army has conducted continuous multinational training and security cooperation activities with Allies and partners in Eastern Europe to improve interoperability, strengthen relationships, and contribute to regional stability. This year, Greece contributed tremendously to the success of Atlantic Resolve by enabling a substantial portion of the 10th Combat Aviation Brigade to enter the European theater through the port of Thessaloniki and to depart through the port of Alexandropouli. As a result, the Alliance’s logistical capability, interoperability, and ability to mobilize resources efficiently.  We also saw a better and more innovative way to use existing resources here in Greece to achieve our joint and multilateral objectives, something that we plan to continue to do in the future.

The United States and Europe have stood shoulder-to-shoulder since 2014 in confronting this Russian aggression with a coordinated sanctions policy. We encourage Ukraine to continue building capable, trustworthy institutions that will reduce and eventually eliminate corruption, strengthen their judicial system, and deliver economic prosperity to their citizens.

The Balkans is a particularly fragile region and we appreciate Greece’s leadership  in promoting the integration of the Western Balkans into Euro-Atlantic institutions.  We also appreciate Greece’s support of the Trans-Adriatic Pipeline and the IGB pipeline in contributing to energy security through diversification of energy sources.  We will continue to work with partners in the EU to bring stability, prosperity, and democracy to the region.  Greece is a pillar of stability in this volatile region, and we will look to it as southern Europe’s energy hub.

Looking further afield to the crisis in Syria, the United States and our European allies have partnered to hold Bashar al-Assad accountable through sanctions for his crimes against his own people. Since the beginning of the Syrian crisis, the EU and its member states have pledged over €9.5 billion in humanitarian, stabilization, and resilience assistance, and those efforts are continuing as the Global Coalition to Defeat ISIS stabilizes liberated areas.

Our European partners have also been strong supporters of our diplomatic and economic pressure campaign against North Korea.  We agree that North Korea is a global threat that demands a global response. We commend our allies for increasing pressure on the regime in Pyongyang in order to achieve the complete, permanent, and verifiable de-nuclearization of the Korean Peninsula.

The United States and Europe face many challenges and threats that – unlike in the past – are simultaneously dispersed along many geographic frontlines and across multiple domains, whether non-state terrorist actors, threats of a more conventional nature, cyber threats, or nuclear threats. Because we know we are stronger in confronting these challenges when we are working together, we will rely even more on Europe, our best partner.

European security institutions, including NATO, must be properly adapted to address internal and external threats such as radical Islamic terrorism, to address cyberattacks, and unchecked migration. Though we know these are the threats of the future, too many headlines have already declared that these are also the threats of today.

To conclude, what the U.S. is able to achieve in this part of the world together with allies is thanks in great part to the strong bilateral defense relationship we enjoy with Greece.  As I have seen first-hand, our long-standing military presence at Souda Bay, on the island of Crete, embodies the close ties and goals we share as we face common challenges.  The security threats to the region around Greece have become much more complex in recent years, and we will need all our efforts, bilaterally with Greece, multilaterally through our Euro-Atlantic institutions, to overcome them.

Thank you very much.  I look forward to your questions.