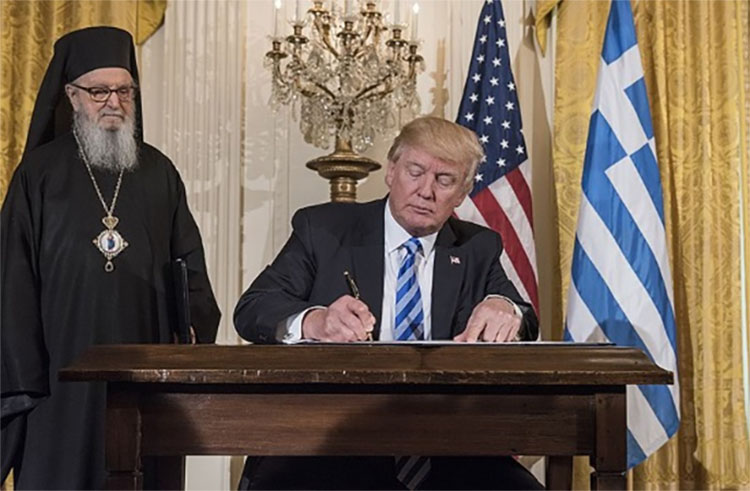 THE PRESIDENT: Wow. That’s a nice crowd of people. So we were just given this great hat. You know what that says? Huh? “Make Greece Great Again.” Right? (Applause.) Right?

Okay. Thank you all very much. A great honor to be here. And so many of my friends celebrate Greek Independence Day.

I want to thank the members of my Cabinet for being here also this evening. Thank you to Secretary Alex Azar. Where’s Alex? What a job he’s doing. (Applause.) First time in 51 years, prescription drug prices have come down. First time that’s happened. (Applause.) That’s Alex Azar. Thank you, Alex. Great job.

Acting Secretary David Bernhardt, who’s going to be a permanent secretary very soon. David? Where are you, David? Where is David? He’s here someplace. Thank you, David. (Applause.) Along with Representative Chris Pappas. We really appreciate it very much. (Applause.)

On March 25th, 1821, Greek patriots rose up and fought to liberate their country, restore their sovereignty, and reclaim their destiny. Right?

This evening, we also celebrate the countless ways Greek Americans strengthen and uplift and inspire our nation. You live by the values that are the foundation of America’s greatness. You really do. You honor hard work. You love your families. You enrich your culture. And you embrace the American Dream and you keep faith in the blessings of Almighty God. And that’s great. (Applause.)

The United States — and all of Western civilization — has been profoundly shaped by the extraordinary achievements of the Greek people, stretching all the way back to ancient times. Long time. It’s a great culture.

Greek poets and philosophers like Homer and Aristotle have helped humanity pursue truth, and virtue, and justice. Ancient Greece achieved extraordinary feats of architecture, geometry, map-making, and so much else that has inspired all wonders of the world. And Greece is the birthplace of democracy. Have you heard that? (Applause.) Have you heard that?

In every generation, Greek Americans have summoned the courage to defend our freedom. Today, we are honored to be in the presence of Greek Americans who have served in the American Armed Forces — many, many great Greek Americans — (applause) — including Senior Airman Gregory Manuel, who is currently a reservist with the 42nd Intelligence Squadron. I love that word. Where is Gregory? Where are you, Greg? Look at him. Handsome guy. (Applause.) Handsome guy. Good. Thank you very much for being here, Gregory. And Major Carl Hollister, who served in the Army for more than 20 years. And we’re very proud of Carl. Where’s Carl? (Applause.) Carl? Thank you. Thank you, Carl.

To Gregory and Carl, and everyone who has defended America and its uniform: We applaud your patriotism and we salute your noble service to our nation. We very much appreciate it. Thank you very much. Great job. (Applause.)

Americans of Greek descent have made lasting contributions to every arena of American life — in business, science, education, music, religion, and sports. You know, they didn’t say “sports.” I added sports. (Laughter.) I know a lot of great athletes. It’s true. I added that one. They didn’t have that on. That’s not good. (Laughter.) Going to have to fire that writer. Get out of here. You’re fired. (Laughter.) They’ve done a great job in sports. Great athletes.

Here with us today is George Marafatsos. George was born in the mountains of Sparta, Greece. (Applause.) When he was 10, his family immigrated to the United States. He earned money — a lot of money — helping out his grandfather’s barbershop.

Today, George has built a successful construction business and has served for more than 30 years as a parish councilmember at Saints Constantine and Helen Greek Orthodox Church in Silver Spring, Maryland. (Applause.) Where’s George? George? Where are you, George? Good job. Have you made a lot of money in construction, George? Was that better than the barbershop, or did you like the barbershop better? (Laughter.) See, he covers all fields, from barbershops to all sorts of things. Good. That’s great. We love the construction business, too. (Laughter.)

And there’s the great Elaine Chao. Good. Hi, Elaine. Elaine came. I was very upset when I didn’t see you here, Elaine. Secretary of Transportation. She’s fantastic. (Applause.) Maybe George can build you a couple of roads, right? (Laughter.) Under budget and ahead of schedule. Okay?

Also here with us is Aphrodite Skeadas. (Applause.) For more than 40 years, Aphrodite has served the Greek Orthodox Ladies Philoptochos Society. (Laughter and applause). I worked on that one. I had to get it right. I don’t know if I did or not, but I tried. (Laughter.) She’s helped lead efforts with more than 20,000 women across the country to feed the homeless, provide scholarships to students, and to help families in times of need.

To Aphrodite and every woman who serves with The Society, thank you for bringing hope to American families. And that’s what you’ve done. Where’s Aphrodite? (Applause.) Where is she? That’s what I thought. Thank you very much. Great job.

Today, we’re also grateful to be joined by Father Kosmas Karavellas. Father Kosmas was born in Greece to parents who had fled communist Albania. When he was five years old, his family arrived in the United States on the Fourth of July. Good day to arrive. When he was a young man, sitting in church, a little girl came up to him and said, “I really love the Christ in you.” Soon after, he decided to become a priest. Where are you, by the way? Right? Right? Where are you? Yes! (Applause.) I knew I liked you when I met you backstage.

Now, for more than 33 years, Father Kosmas has served the Greek Orthodox community in Annapolis, Maryland. Is he doing a good job? Doing good? (Applause.) He said, “Yes!” You’re okay. He said “outstanding,” actually. That’s very good. Can’t do better than that, right? Thank you very much. He helped build a new church, and he’s ministered to countless souls.

Each of these remarkable individuals represent the stories of so many Greek Americans in the room. Many of them are in this room with us right now. And are you having a good time? Is everybody having a good time? (Applause.)
You have devoted your lives to your families, your communities, and to our country. Through your grit and your drive, and your will to succeed — you are very, very competitive people, I can tell you that. (Applause.) They don’t ever quit. You don’t ever give up. That’s what we want.

You’ve brought jobs and promise to cities and towns across America. And you’ve deepened the bonds of affection and renewed the pride of patriotism that unites us as one people, one family, and one glorious nation under God. (Applause.)

THE PRESIDENT: Thank you. Thank you. You know, we — if I might say, we have an economy that’s as good as it’s ever been in our history. (Applause.) We have unemployment numbers — (applause) — we have unemployment numbers that are setting records and doing phenomenally. We have a country that’s the envy of the world, from an economic standpoint and from many other standpoints. We’re doing better than we’ve ever done. Is that right, Howard? I think you can speak to it. And, Harry, you can speak to it.

We know there’s never been — rarely, certainly — there’s rarely been a time like this, economically. The world is talking. When presidents and prime ministers and other come to see me, they all say, “Congratulations on this great economy that you’ve built.” And they try and do the same thing. And it doesn’t work out so well, but that’s okay. But they’re trying.

But we have — (applause) — we have an economy that’s as good as it’s ever been. We have car companies moving in. Many, many car companies. I was with Prime Minster Abe of Japan.

THE PRESIDENT: Four more years. (Laughs.) I was with Prime Minister Abe. They’re sending many companies. Toyota just announced a $13.5 billion investment in the United States. They’re opening up more plants and expanding. (Applause.) And many other companies. So, we’re very proud of it.

But now, before I sign the Greek Independence Day proclamation, which I look forward to doing — I’ve now done it already twice; this is my third time. You know what that means? Time flies. Look how this happened. And I wouldn’t miss it. I wouldn’t miss it. I was supposed to be at another event today. I said, “You mean…” — the people came over — I said to them, “You mean I won’t be able to be there for my Greek friends?” They said, “No, sir. Not this time. But next year.” I said, “No, no, no. I’m doing it this time.” So — (applause.)

So I’d like to invite a friend of mine, Archbishop Demetrios, to say a few words. And then we’re going to sign this great proclamation. Thank you all very much. Thank you. Thank you. (Applause.)