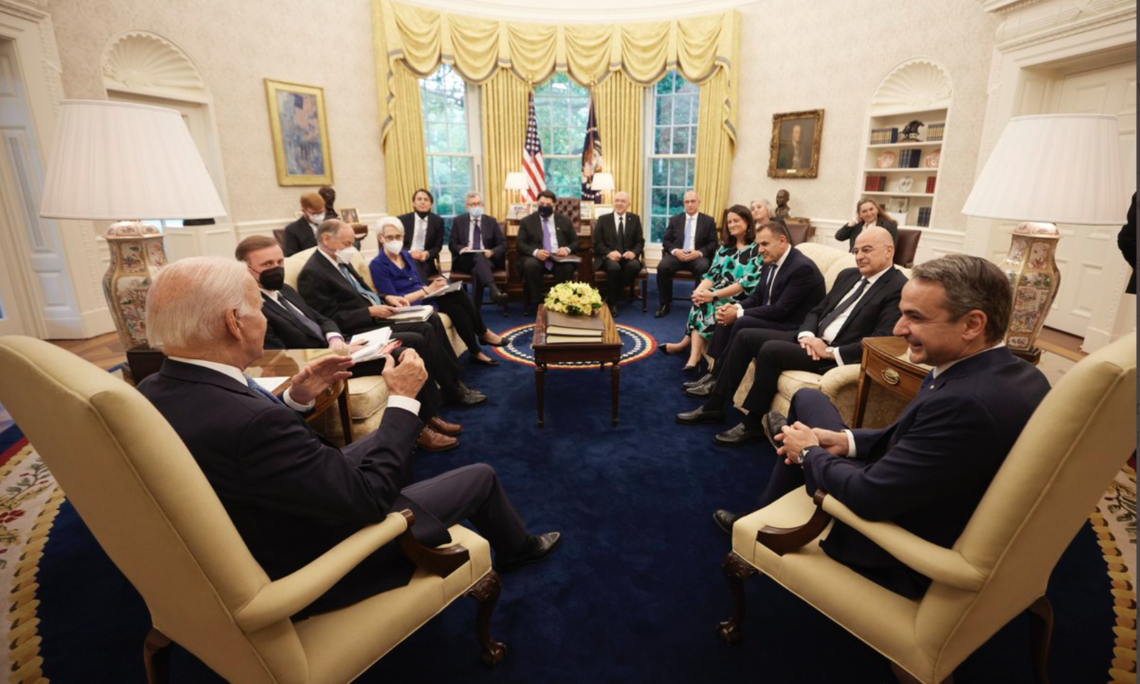 PRESIDENT BIDEN:  Well, Mr. Prime Minister, welcome.  It’s great to have you here.  And later this afternoon, we’re going to celebrate 201 years — 201 years of Greek independence and strong ties of family and shared democratic values with the United States, and a burgeoning personal friendship between you and I.  You’ve been wonderful.

The democratic ideals that we so cherish originated in Greece, as we all know, inspired by our founders who were students of Greece, and for centuries has empowered —

(A cell phone interrupts.)  Someone is playing music.  Anybody want to make that phone call?  (Laughter.)  There you go.  Thank you.  It happens all the time.  Don’t worry about it.

Sadly, Russia’s brutal attack on Ukraine is also about a threat to democracy from autocrats who want to bear down on rules-tested orders and — rules-based orders.

I want to thank you, Mr. Prime Minister, for Greeks’ moral leadership here.  It’s not easy, I know.  But thank you.

And we have much to discuss today on our ongoing support for Ukraine, our deepening defense and trade partnerships, energy security, climate change, and so much more.

Today, the friendship and partnership between our countries, between Greek — the Greeks and Americans is, I think, more important than ever.  And I’m honored to celebrate that partnership with you because you’ve been a good friend.  So, welcome.

The floor is yours.

PRIME MINISTER MITSOTAKIS:  Thank you.  Thank you very much, Mr. President, for these kind words.  It is indeed a privilege for me to be here in the United States to celebrate with you 201 years since the beginning of our War of Independence.

As you know, your founding fathers were inspired by the ideals of Athenian democracy, and our founding fathers were inspired by the struggle for independence on these — on these lands.  And over the past two centuries, our two countries have always been on the right side of history.  We fought in wars together.  And, of course, we are now facing, united, the challenge of Russia’s invasion into Ukraine.

At the same time, this visit is an opportunity to reassess the status of our relationship.  I honestly believe it is at an all-time high.  And I’m not just speaking about the defense component of the relationship, but I’m also speaking about trade investment — Greece’s role as a reliable partner in the eastern Mediterranean, as a country that overcame the financial crisis with a booming economy, and as a pillar of stability both in the Balkans and in the broader region.

So, when we talk about issues such as energy security, there’s so much more we can — we can do together.

And I’m very, very happy to be here with you to discuss these important topics and, later, to be able to address also your many Greek-American friends.  And I know how close your ties are to Greeks and Greek Americans.  And it’s a privilege to have them here at the White House.

PRESIDENT BIDEN:  Well, I’m delighted you’re here.  Thank you.  And I look forward to our discussion.