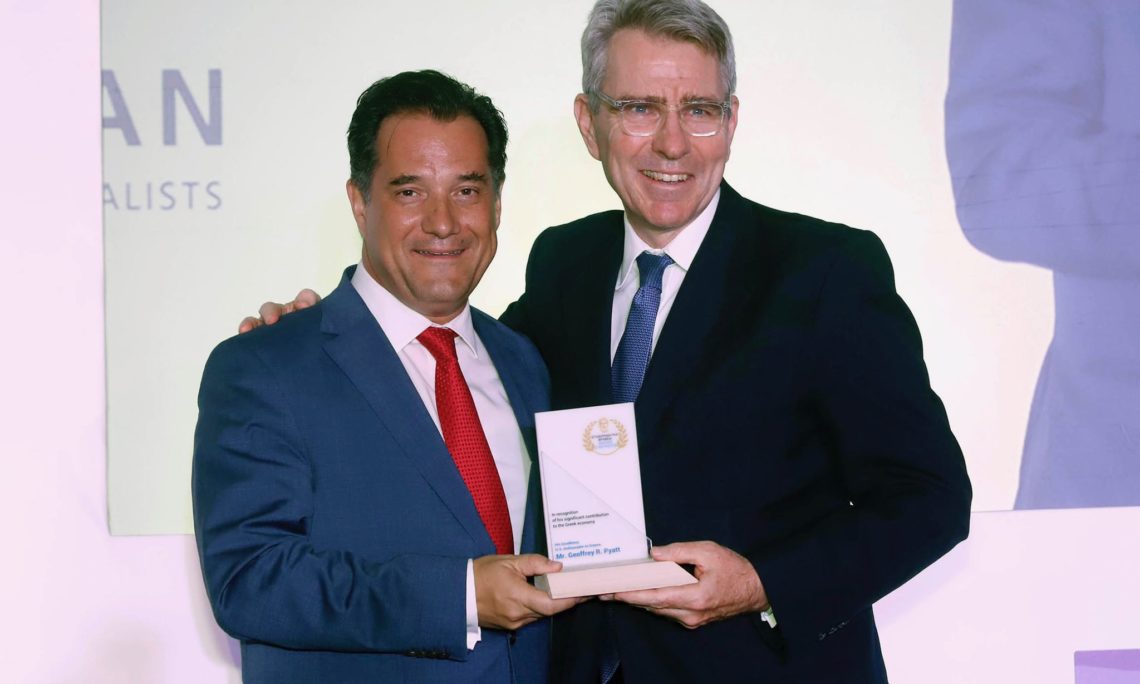 Ambassador Pyatt:  Thank you, Minister.  Καλησπέρα σας. And thank you, [Magna], for cutting to the chase.

Minister Georgiadis, Minister Kerameus, Minister Theodorakos Minister Karamanlis, Deputy Minister Karaoglou, Alternate Minister Koumoutsakos, Governor Tzitzikostas, Mayor Zervas, and anybody else I’ve forgotten to name.  Friends, thank you for having me with you here this evening.

I also want to commend all of the organizing business associations for this initiative to recognize standout Greek entrepreneurs in conjunction with the Thessaloniki International Fair.

This invitation to be part of the Thales of Miletus Award gave me an opportunity to read up on Thales, who I learned is the father of the scientific method. So like a good scientist, I’m going to be very brief and stick to the facts.

As I’ve said often, the United States is committed to Greece’s full economic recovery, as we believe a robust economy in Greece will strengthen your country’s ability to serve as a pillar of stability in a difficult region and enable our countries even better to work side by side to advance common goals.

To that end, through multiple American administrations, we have devoted significant resources to support Greece’s economy through a market-focused, entrepreneurial approach that has been so successful in the United States, and especially in my home state of California.

I see in Greece the same highly educated, curious, creative human capital and the same wealth of natural resources as in my home state, which is why the U.S. Embassy has made continued, concerted efforts to help grow Greece’s entrepreneurial sector and encourage U.S. investment and partnerships with Greek companies.

And in that regard, I want to applaud Minister Kerameus’s focus on building bridges between the academy and Greek markets, as she mentioned tonight.

I’ve witnessed the innovation sector bloom in countless meetings around Greece over the past three years.  From Thessaloniki to Athens, from Ioannina to Patras, as resilient and resourceful young people embrace the uncertainty of a startup environment to apply their talents to new opportunities.

We believe that creating a supportive environment for Greek startups is more than a one-week or a one-year commitment.  That’s why we make such a big investment in the U.S. presence at last year’s Thessaloniki International Fair, where the U.S. was Honored Country.  And in this regard, I want to acknowledge the leadership of Nikos Pappas, who as Minister of Digital Policy last year, was so helpful to our efforts.

And we’re very pleased this year to join India’s celebration as Honored Country at the Thessaloniki International Fair.  Our program of events this week will focus on American experiences and expertise in entrepreneurship, innovation, and technology, building on the “agora of ideas” for which our presence as Honored Country in 2018 was so well known.

We’re teaming up, once again, with our partners from NGOs like Found.ation to organize entrepreneurship and digital skills events.

We’re very happy this year to be hosted by the Digital Greece Pavilion, a new collaboration with Greece’s Ministry of Digital Governance and Minister Pierrakakis which builds on our neighborly relationship between Pavilions 12 and 13 last year.

In Pavilion 6, we’re co-sponsoring the fourth Global Agripreneurs Summit which will include a trade exposition and competition for agri-food companies with support from Minister Voridis.

And we’re doing all that we can to get the word out about the new Greece.

As Secretary of Commerce Wilbur Ross made clear in his public comments yesterday, we are “maximumly bullish” on opportunities today for American investment and partnership in Greece.  American investors are seeing positive signals across the Greek economy, from energy and agro-tech to infrastructure and transportation, health care, farming, tourism, and of course the emerging knowledge-based and innovative sectors as illustrated by [inaudible].

We designed our TIF programs to help our Greek partners take the next step forward in these growth-advancing sectors of the Greek economy, and to deepen conversations between Greek and American businesses which continue to produce results.

Our ongoing partnership at TIF also highlights the critically important role of Thessaloniki and northern Greece, Macedonia in particular, as the international gateway to the western Balkans and a market of 30 million people facilitated by the normalized relations that Greece now enjoys with your northern neighbors.

Investors are responding to the green lights coming from Greece and to the all-time high in U.S.-Greece relations, and we’re working hard with Prime Minister Mitsotakis’s government to help them drive these opportunities forward. As we prepare to revisit the gains and ambitions of our bilateral relationship at the next U.S.-Greece Strategic Dialogue, we’re determined to build on the positive momentum from TIF in all areas of our relationship.

Thales develop a new way of thinking about big human questions, one that encouraged dialogue between partners and supported practical, step-by-step improvements in the pursuit of knowledge and human progress.

In this spirit, the United States will walk with Greece on its path to economic recovery.  And using Thales method, we will ensure that Greece is known not only for its spectacular past but also for its bright and prosperous future. Ευχαριστώ πολύ.