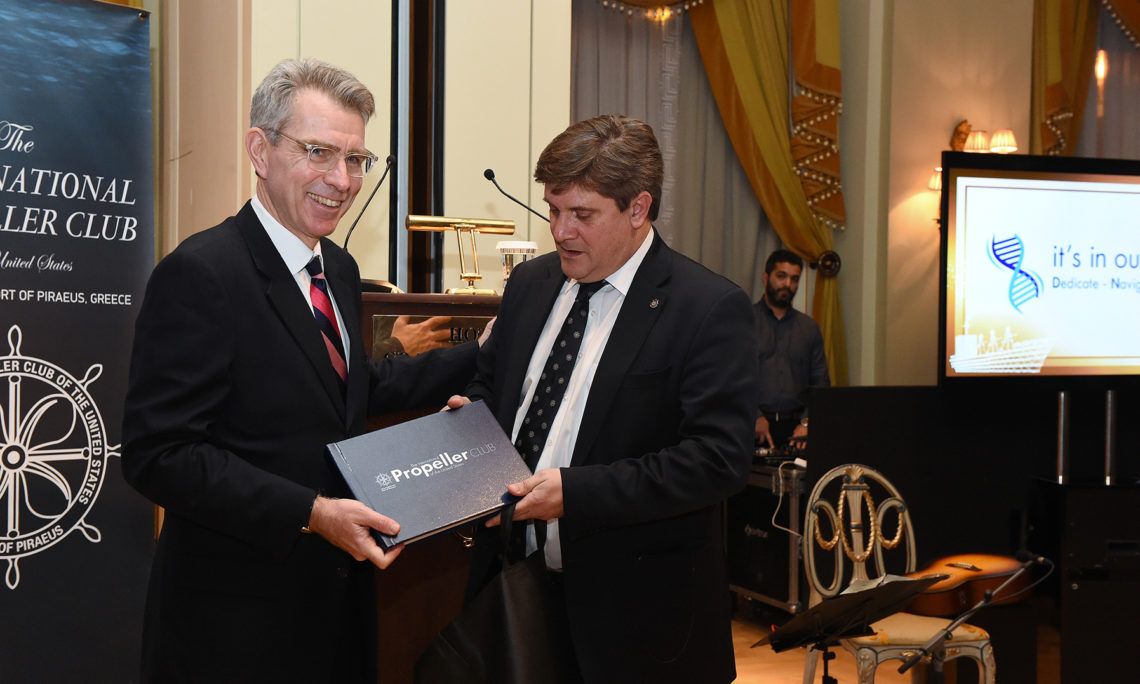 Kalispera. I’ll be very brief. I’ve been to Washington twice in the past month, and one of the things you hear a lot in Washington these days is that 2018 was the most productive year in U.S.-Greece relations in the history of our modern relationship. And that accomplishment is something that is a great source of pride in the United States, but it is also an accomplishment that reflects significantly on the fantastic partnership we have enjoyed with the Propeller Club of Piraeus, so thank you George for everything you have done.

The maritime sector looms very large in our bilateral relationship. That was reflected in Thessaloniki in the presence of the Flagship of the U.S. Sixth Fleet, the U.S.S. Mt. Whitney, and in that regard, I am especially glad that we have with us here tonight, our friends and partners, Admiral Raptis and Admiral Pavlopoulos, because when I look back at 2018, the work between our navies, the work between our Coast Guards has been one of the great sources of pride, whether it is the exercises that our forces have conducted together in Crete in December through Jackal Stone, the largest interagency counterterrorism exercise that the United States will conduct anywhere in Europe in 2018-2019, or the constant support that the Hellenic Navy provides to U.S. military operations in the Eastern Mediterranean and beyond. We are very, very grateful for our alliance.

Our maritime relationship also touches significantly on the energy sector. It was very exciting in December, when we saw the arrival in Revythousa of the first consignment of American Liquified Natural Gas coming from Houston to heat and provide energy to Greek homes through the Revythousa terminal. But what a lot of people don’t know is that first consignment arrived on a Greek-flagged vessel — one of Captain Tsakos’ LNG tankers brought that gas to Greece, and now we have two additional consignments that are on the water, both contracted by Mytilineos, an important reminder of the emerging role of Greece as a European energy hub, but also the critical role that Greek shipping provides in facilitating the global trade in liquefied natural gas. We look forward to even more of that in the months and years ahead.

We also saw last year the injection of American capital through the privatization of the Syros shipyard, the rebirth of that shipyard, with the support of a Greek American company, ONEX, and we are optimistic that the successful revival of Syros is not the end of the story, but will open the door for further progress as the Greek shipbuilding industry also comes back to growth.

Mary and I are very, very grateful for the partnerships that we’ve enjoyed with the Greek shipping community, and we continued our tradition this year with visits to the great shipping islands of Andros and Chios, and we also notched an important accomplishment this year when we got to Kardamyli, the biggest little town in Greece, so we are very, very grateful for all of the hospitality we enjoyed there, but we have tremendous plans for 2019.

The United States is committed to doing anything that we can to help ensure that 2019 is the year of Greek economic recovery. We’re looking to continue to deepen our ties with the maritime sector, including through partnerships between SUNY Maritime and the Greek maritime academies in Hydra and elsewhere in the country. And I’m very open to other suggestions from our team, the governors of Propeller Club, and others who have ideas about how we can work concretely to deepen a critical relationship for the United States, as we look at Greece as a regional partner and a pillar of stability in the Eastern Mediterranean and beyond.

So, George, again, congratulations, Chronia Polla, and thank you very much for your time.