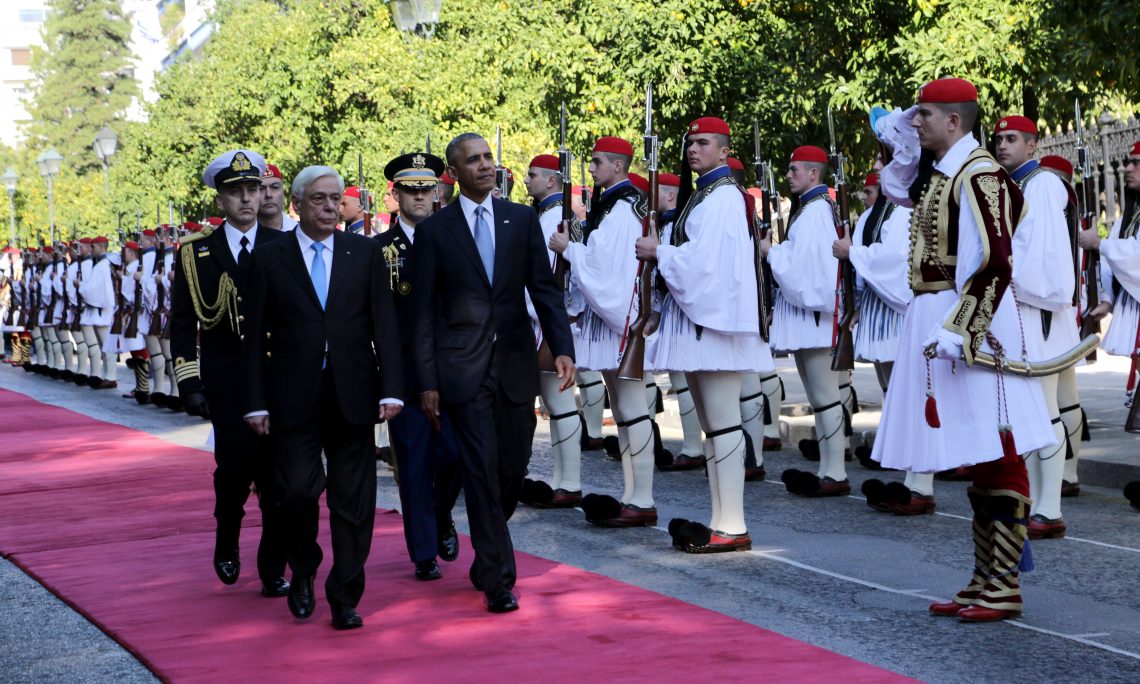 The White House
Office of the Press Secretary

PRESIDENT PAVLOPOULOS:  (As interpreted.)  Mr. President, I welcome you to Athens, as the President of that great, friendly country, the United States of America, who has won global distinction for defending land, democracy and justice.  These are the characteristics which define your international acclaim and appeal.

Your acclaim and appeal are, of course, justified by, among others, your initiatives of dealing with a deep global economic crisis; the support of the social rule of law; management of the acute and, in your own words, epic refugee crisis with humanity and justice; and cracking down on the barbarity of terrorism, dealing in an appropriate manner with countless criminals who commit crimes against humanity.

Mr. President, our peoples are bound by truly historic ties of friendship and cooperation, which have become even stronger, thanks to the great Greek American community of which we Greeks are very proud, and for which we always have feelings of great gratitude.  With this opportunity, I would like to thank you warmly for your solidarity to Greece and to the Greek people throughout this deep and painful economic and social crisis that our country suffered.  I am certain that your successor, the new President of the United States, Mr. Trump, will continue on the same path.

Mr. President, in these difficult times for mankind, mankind stands to benefit a great deal from the close and sincere cooperation between the United States and the European Union.  We are convinced that the U.S. has every reason to look forward to a strong and prosperous Europe.  Greece is committed in this direction.  Despite the hardship and the huge sacrifices of the people — which, it should be noted, are not only the result of our own errors — we remain firm on the course of the European Union and of the Eurozone.  We strive to make all our partners understand that it is our duty to stay on the path of European integration, far from phobic syndromes and lack of solidarity, which can only undermine our common European future.  We are deeply inspired by the European ideals, and we defend our national interests not only on the basis of international law as a whole, but also on the basis of European primary law and secondary legislation.

We deal with our national issues within this primary and secondary legislation.  And therefore I’d like to point out three examples of what we call our national issues.  The Cyprus issue, which is, of course, first and foremost, an international and European issue can only bear a result through full respect of the European institutional hierarchy, and we are in favor of a speedy resolution based on the fair and viable solution.

The institutional hierarchy obviously excludes a confederate solution or occupation armies and obsolete guarantees, which deprive the modern concept of sovereignty of its meaning.  We should also not forget that the solution of the Cyprus issue that does not respect those facts would create a very negative precedent for the existence and the sovereignty of every member state.  This is primary European role rule and this precedent could put at risk all of the individual member states.

Finally, the fact that the neighboring state is claiming a name, which, besides falsifying history, obviously constitutes irredentist behavior, and therefore indirectly questions existing borders, this goes against international and European law and undermines its own European perspective.

Mr. President, I would once again like to welcome you.  And I reserve the words that befit your personality and your work for tonight’s dinner.  I wish you a pleasant stay in Athens.  And let me assure you that we Greeks always, even after the end of your term, think of you as a statesman of world-class and a great friend of Greece and the Greek people.

PRESIDENT OBAMA:  Well, Mr. President, I just want to thank you for the warm welcome and thank the Greek people for hosting us here today.  I send greetings from all Americans, but, as you noted, we have an extraordinary Greek American community that is very excited about this visit.

This, as you noted, will be my last foreign trip.  And I thought it was very appropriate for us to visit a great country that is the birthplace of democracy, the source of so many of the ideals and values that helped to build America, and an outstanding friend and ally.

Obviously, Greece has gone through very challenging economic times over the last several years.  And it has been the policy of my administration to do everything we can to work with the Greek government and the Greek people to restore growth and optimism and to alleviate hardship.  And we are glad to see that progress is being made, although we recognize that there are significant challenges ahead, and we intend to stand shoulder-to-shoulder with the Greek people throughout this process.

We believe that a strong, prosperous and unified Europe is not only good for the people of Europe, but good for the world and good for the United States.  And we also believe that it’s important that all people have opportunity and inclusion in growth inside of Europe.  And part of my message as I travel not just to Greece but to meet with other European leaders is to encourage a process that ensures opportunity for all, particularly for the youth of Europe and youth here in Greece.

I also want to extend the world’s appreciation for the humanitarian and compassionate manner that Greece has dealt with the severe migration and refugee crisis that’s been taking place.

As I said at the U.N. Summit on Refugees that I hosted in September, it’s important that we don’t have any single country bear the entire burden of these challenges — that all of us are contributing and participating in alleviating suffering and dealing with migration in an orderly and compassionate way.  And we have been very glad to partner with the Greek government in managing this situation appropriately.

And finally, whether it’s dealing with terrorism, addressing some of the challenges that are occurring in the Middle East, hosting our naval vessels, cooperation in the Aegean Sea, the strong NATO relationship between the United States in Greece is of the utmost importance.  And I want to reaffirm not only our appreciation for the Greek people in that alliance, but underscore how important we consider the Transatlantic Alliance. It continues to be a cornerstone of our security that is unwavering and it is something that provides significant continuity.  Even as we see a transition of governments in the United States, across Democratic and Republican administrations, there’s a recognition that the NATO alliance is absolutely vital and the transatlantic relationship is the cornerstone of our mutual security as well as prosperity.

So, in addition to the formal meetings, I also hope to get a chance to see the Acropolis, because if you come to Greece, you’ve got to do a little bit of sightseeing.

So thank you, again, for your very gracious hospitality and thanks to the Greek people for the friendship and the partnership that has made both our countries stronger.