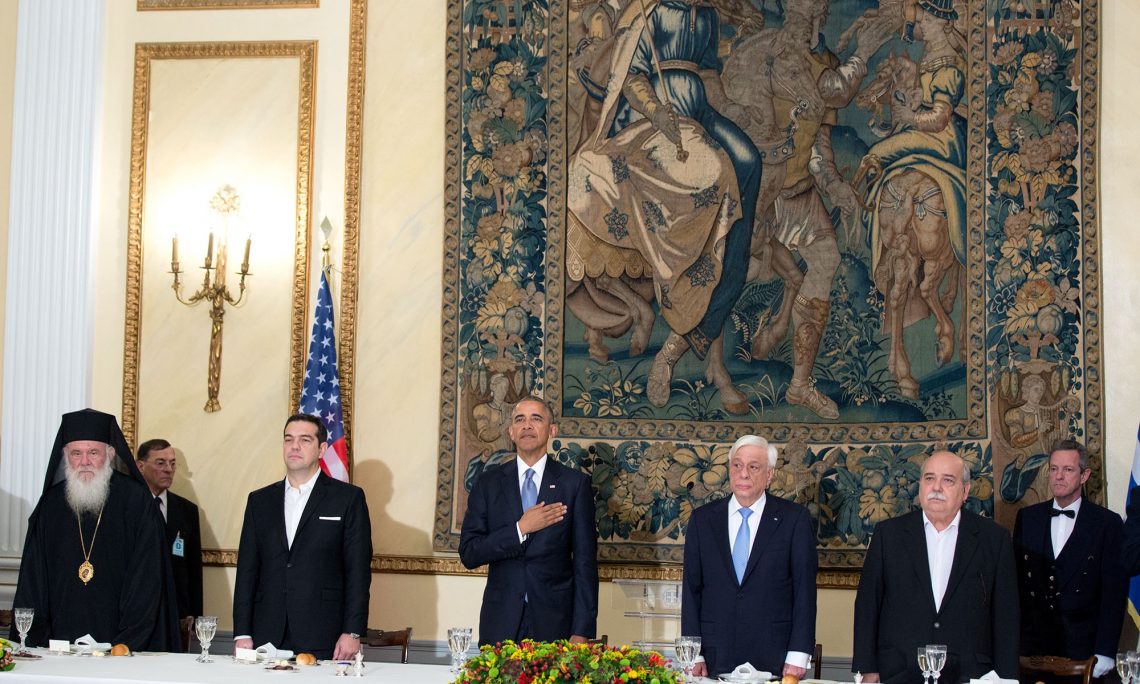 PRESIDENT PAVLOPOULOS:  (As interpreted.)  Mr. President, I welcome you to Athens and to the presidency of the Republic, as the President of the United States of America, who has constantly and consistently served with respect for man, for the consolidation of peace and the defense of democracy, and of its twin brother, the social rule of law, by holding in check the extreme inequalities which directly threaten social cohesion.  We fully share those ideals.

Let me be even more specific.  In this deep and prolonged economic and social crisis, which is plaguing our country and our people, for which we are far from being the only ones to blame, I would like to point out the following three things.

First, we deeply believe in representative democracy and in every one of its institutional dimensions.  We are especially inspired by your emblematic constitutional tradition of checks and balances.  It is these that shield popular sovereignty and parliamentary rule, as well as the independence of justice from many arbitrary interference by the executive, or, even more, by the various instruments of globalization which lack any democratic legitimacy.

Second, we continue our unwavering course within the European Union, and its (inaudible) the Eurozone, despite the huge economic and social burden of a mostly wrong and dead end austerity policy.  And in respect of this, Mr. President, I was very happy to hear you point this out, and I hope that your word will urge our European partners to move in the right direction.

Alongside our partners, with which we share a true and selfless European path, we fight to restore the values and principles which were the foundations of European integration, mainly the respect for man and for social justice.  These are the principles which will keep the nightmare of fascism and Nazism left behind by World War II forever in the dismal past.  We never forget the decisive contribution of the United States of America in that war, so that Europe could hold back the fate of what Mark Mazower called the “Dark Continent.”  We will always remember Omaha Beach in Normandy.

Third, Mr. President, we are responding with uncompromising dignity to the huge refugee crisis, which you have called of epic damage, which is mainly the result of the war in Syria.  We expect solidarity by our European partners, and we expect that they will open up their minds and listen to your opinion.  In this we are inspired by the ancient Greek institution of the (inaudible.)  At the same time, we are doing our part in the fight against the barbarism of terrorism, which is committing crimes against humanity.

But, Mr. President, in order to defend refugees and to stop terrorism, the war in Syria and in the wider region must end.  This is the common objective and this requires harmonious cooperation of the U.S., the EU, and Russia.  And we are happy that you were able to fully understand this truth and have turned it into action with your wise and also visionary policy, and therefore we start seeing the first results — maybe late, but it is never too late.

Mr. President, we urge you from here, from Athens, with its eternal, simple Parthenon — the Parthenon of democracy and civilization — to continue to serve the same ideals after the end of your term.  Your appeal will continue into the future.  In this future and very promising journey, we would like you to take Greece along.  At this point, I’d like to remember the words of the poet Odysseas Elytis:  Please do not forget our country.

I will, therefore, conclude my address by reminding you of what Andre Malraux said in his memorable speech at the inauguration of the illumination of the Acropolis on March 29, 1958:  “A secret Greece resides in the heart of all men of the West.”  It is this secret Greece that the Greek people offer you as a gift during this visit, precisely because we deem it worthy of the U.S. President, Barack Obama.

Mr. President, on behalf of the Greek people, I wish you personal health and success.  And I ask you to convey the Greek people’s sincere warm wishes for growth and prosperity to our committed and great friends, the American people.

PRESIDENT OBAMA:  Kalispera.  Mr. President, Mr. Prime Minister, distinguished guests, ladies and gentlemen:  Once again, it is a great honor to be in Greece.  And on behalf of myself and my delegation, on behalf of the American people, thank you for the warmth that you’ve shown us on this visit.

Of course, your hospitality comes as no surprise.  As Pericles said in his famous oration many centuries ago, “In nobility of spirit, we differ from most others in the way we conduct ourselves towards other people.  We make friendships not by receiving kindness from others but by conferring it on others.”  And we certainly have felt the kindness of the Greek people conferred on us today.

I’ll have more to say in my speech tomorrow about the ties of history and heritage that bind our peoples together.  Of course, that does include our love of the Olympics.  Greeks rightly take pride as the founder of the Games — and in Leonidas of Rhodes who, for 2,000 years, held the record for winning 12 individual gold medals, the most of any athlete.  And we Americans take pride in Michael Phelps, who set the new record this summer.

Besides that friendly competition, we are deeply grateful for our alliance with the Greek people.  I think that we have inspired each other to reach for independence, stood in solidarity during war and peace, in good times and in bad, including these very difficult years for the Greek people.  And tonight I want you to know that as you work to move your country forward, you will always have the support and friendship of the United States.

I want to close with a moment from our shared history.  In 1821, as Greece began its fight for independence, a Greek patriot wrote a letter to the American government appealing for assistance.  “Although a broad sea separates us,” he wrote, “your virtues, Americans, are close to ours.”  And he added, “We consider you as friends, co-patriots and brothers.”

So in appreciation for our friendship and your hospitality, if I might propose a toast:  To the virtues and values that unite us across a broad sea.  May Greeks and Americans always be there for each other — as friends, as co-patriots, and brothers and sisters.  Stin ygeia sas.  Cheer.

(A toast is offered.)