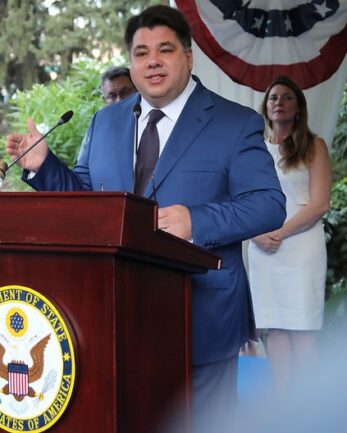 U.S. Ambassador to the Hellenic Republic

George James Tsunis presented his credentials to the President of the Hellenic Republic on May 10, 2022. He was nominated by President Biden and was confirmed by the U.S. Senate on March 10, 2022.

Ambassador Tsunis is the proud Greek-American son of immigrants to the United States, with deep roots in the village of Platanos in the beautiful mountainous region of Nafpaktia.  Growing up, his parents instilled in him the Hellenic ideals of καλοσύνη (goodness), αγάπη (love), and above all, φιλότιμο (the love of honor).  He learned Greek as his first language.  Deeply engaged with the Greek-American community, Ambassador Tsunis was a founding trustee of the Hellenic American Leadership Council, and is a trustee of the Hellenic Initiative among other roles.

Prior to his nomination, Ambassador Tsunis was the Founder, Chairman and CEO of Chartwell Hotels, LLC.  He served as Chairman of Battery Park City Authority.  He was also a Trustee for the New York City Convention Development Corporation and the New York City Convention Operating Corporation and helped manage a 1.5 million square foot expansion of the New York Convention Center, transforming it into one of the world’s most modern and beautiful convention centers.  Ambassador Tsunis served as the chairman of the Nassau University Medical Center, a large public safety net hospital with a focus on providing care to vulnerable communities.

Ambassador Tsunis earned a B.A. from the New York University, New York, NY and a J.D. from St John’s University of Law, Queens, NY.  He was an Archon of the Ecumenical Patriarchate (Order of Saint Andrew), the highest ecclesiastical honor that can be bestowed upon a layman by the Greek Orthodox Archdiocese of America, and is the recipient of numerous awards including the Harry Chapin Humanitarian Award for Long Island Cares and the lifetime achievement award for civic engagement for Long Island Business News.  Ambassador Tsunis is married and has three children

Speeches and Interviews by the Ambassador