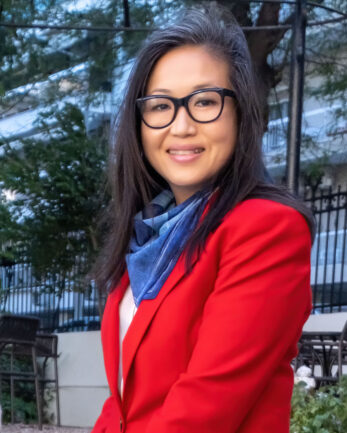 Ms. Lee is a career member of the Foreign Service with fourteen years’ experience as a foreign policy leader, manager, and negotiator on a diverse range of regions and issues, including the Middle East, East Asia, and the United Nations Security Council.  Previous assignments include the U.S. Embassies in Seoul and Baghdad, the former U.S. Consulate General in Jerusalem, the U.S. Mission to the United Nations in New York City, and the Israel and Palestinian Affairs Desk at the State Department in Washington D.C.

Ms. Lee holds an M.A. degree in Public Policy and International Affairs from Princeton University, a law degree (J.D.) from the University of Minnesota, and a bachelor’s degree in English Literature from Grinnell College.  She is proficient in Greek, Korean, and Hebrew, and has studied Arabic and Spanish.  She is from California and is accompanied by her Golden Retriever, Pumpkin, aka Kolokithoula.  She was the President of glifaa (LGBT+ Pride in Foreign Affairs Agencies) from 2018-2019.