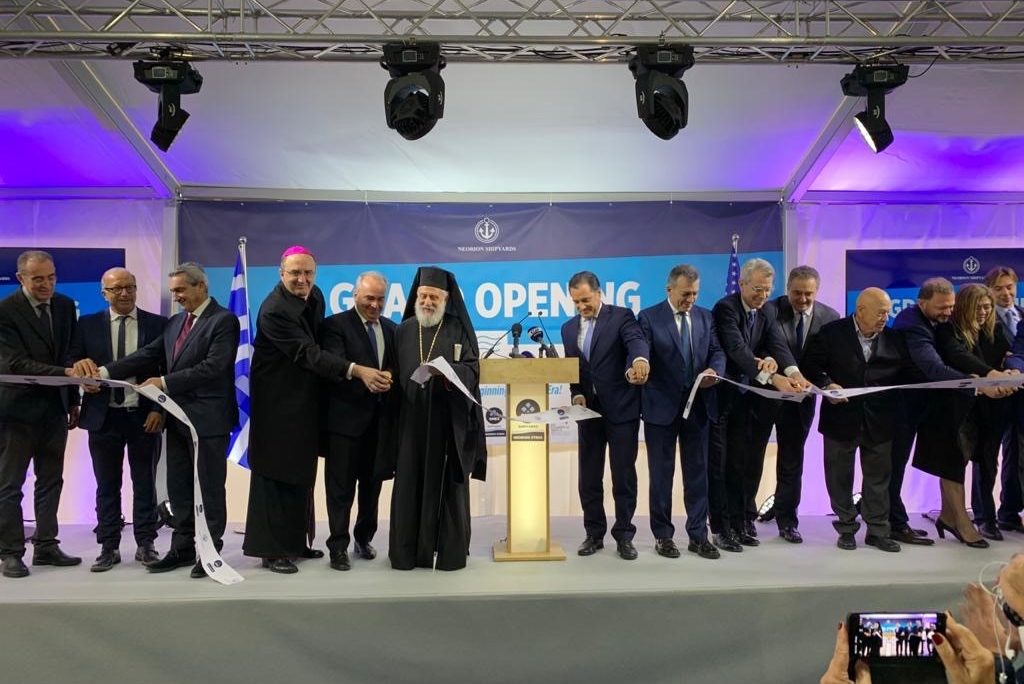 Congratulations, especially to the workers on this grand re-opening of the Neorion shipyards.  When I visited Syros two-and-a-half years ago, this place was literally rusting away.  Workers and suppliers had not been paid, and more than 75,000 tons of sandblast waste had accumulated at the port.  Today, this strategic investment is in the hands of an American company, and the shipyard has entered a whole new era.

The benefits to this community are clear.  Onex has so far invested 18 million euros in Neorion, which includes backpay of more than eight million euros for hundreds of long-time employees and local suppliers that had built up over many years. Onex plans to invest another 12 million euros to upgrade the shipyard by the end of 2021.  And that does not include the more than 20 million euros that Panos has invested in the island’s economy through salaries and local contracts.

These investments have created close to 600 jobs, nearly tripling the workforce from five years ago.  And Onex is working with Minister Georgiadis, Minister Kerameos, and the Minister of Labor to recruit the company’s retired mechanics as teachers to share their skills with Syros’s next generation of workers.

Shipbuilding is part of Greece’s heritage, and again is part of its future.  The industry’s growth from 2017-2019 is set to exceed 100%, with Neorion contributing over 90% of that growth.

At a more fundamental level, this means that Greek shipowners like my friends Captain Tsakos, Captain Prokopiou, no longer have to travel to Turkey, Malta, or further afield for maintenance and repairs.  They now have a competitive “local” option that benefits Greece.  And beyond the increased economic activity, Panos and his team’s rehabilitation of this facility demonstrates what Greece gets with American investment.

Onex’s investment in the Neorion Shipyards builds on a long history of U.S.-Greece ties in the maritime sector.  And the U.S. government views Neorion as an important American investment – strategically, commercially, and symbolically.  And I think the fact that the Onex investment began under the Syriza government and has now been brought to fruition through Prime Minister Mitsotakis demonstrates the wide support for these efforts to deepen U.S.-Greece trade and investment ties.

I hope that this will be the first of many U.S. investments in the Greek maritime sector, which we view as a priority for strategic reasons.

I’m encouraged that U.S. investors are strongly interested in privatizations at Alexandroupoli, Kavala, and Volos, and we hope that Onex will be able to repeat its success at Syros on a much larger scale in Elefsina.

The United States benefits greatly from our maritime partnership with Greece, from our longstanding relationships at Souda Bay to increased use of  ports like Alexandroupoli under our expanded Mutual Defense Cooperation Agreement.  Now that U.S. officials are aware of the rebirth of Neorion shipyards, Onex is actively engaging with the U.S. Navy to competitively bid for future U.S. Navy shipyard work that would take place here in Syros.

So congratulations again to Onex and to the people and workers of Syros for all of the progress you have made over the past year to revitalize this central sector of the Greek economy, which contributes so importantly to regional stability and security.  I look forward very much to watching your future success.  Ευχαριστώ πολύ.