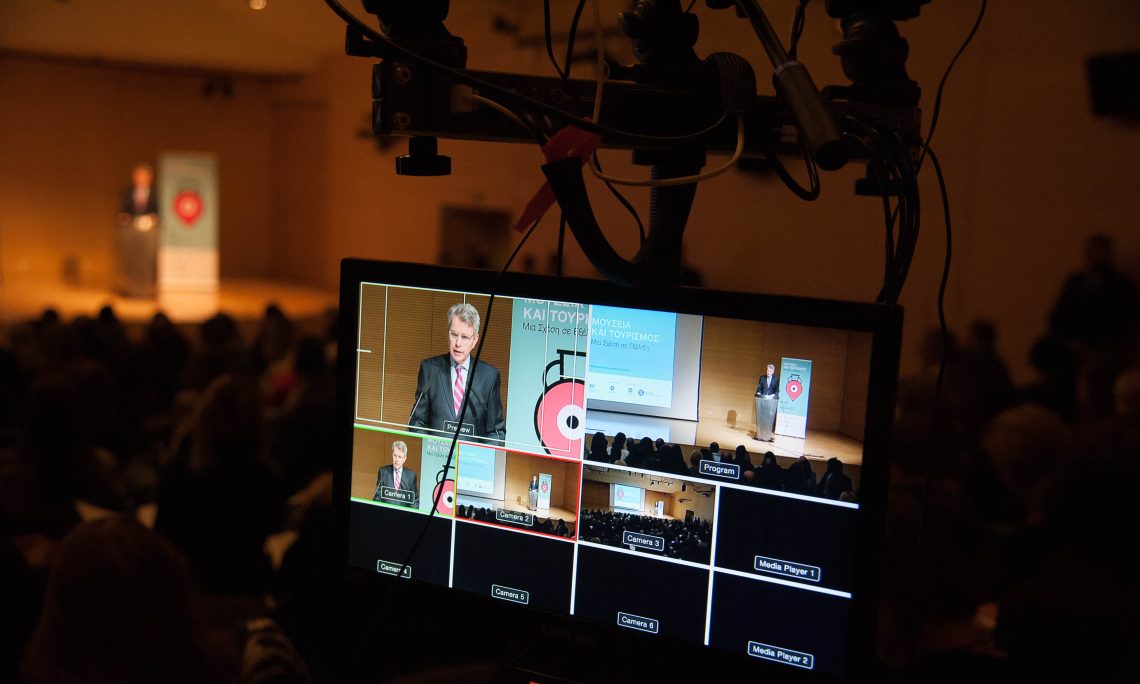 Καλημέρα, good morning everybody.  It is a real pleasure for me to be here today.  I’m especially humbled to be doing so with Ambassador Kittmer who knows a great deal more about these topics than I ever will and who also has been one of my teachers in my first months here in Athens.  So, John, thank you for joining with us.  We are very, very proud of our partners in this enterprise from the British Council, from the British Embassy, of course, from the Benaki Museum, and from the City of Athens.

One of the great pleasures of serving as an Ambassador, for any country, in Athens, of course, is the opportunity to live in one of the world’s truly great cultural capitals.  There is probably no place, no city in the world that has a greater immediate concentration of antiquity than this one right here.  And this conference, which we’ve now been doing for a number of years, is an opportunity for us as the United States to give something back and to support the efforts of the city, the efforts of institutions, like this museum, to develop best practices, to grow the economy, but also to preserve the incredibly important cultural legacy that this city represents.

We had the opportunity to do so in a very high profile way when President Obama was here recently.  And I know everybody saw his YouTube video touring the Acropolis but I think he was also incredibly humbled to have the opportunity to explore the Acropolis Museum and, again, to recognize how much this city has given to the world as a cultural legacy.

We recognize, of course, that cultural, educational, nonprofit institutions have been hit hard by the economic crisis here in Greece.  So it has been a time of reassessment and this is true, not only in Greece, but also in the United States where institutions have had to look at new ways of doing business.  In this environment, cultural and heritage institutions have to adjust their plans, they have to develop their outreach strategies, they have to find new and more effective ways to draw an audience, to market what they have to offer.

But Greece is still doing very well in this regard.  You can just look at the numbers – 26 million tourists in 2015, probably 28 million before this year is over.  One of the things that I want to do as American Ambassador is make my best effort to help the Greek government to grow those numbers coming from the United States, to make clear that Greece is safe, that it has, as you all know, some of the world’s most attractive countryside, food to die for, and heritage that makes us all stop and think.

And so, I look forward to this conference as an opportunity to look at how to continue to grow this incredibly important sector of the Greek economy.  The statistics I have – one fifth of Greece’s gross domestic product now comes from tourism industries; one in five workers is employed in tourism-related industries.  So it is very, very important that we all get this right.

And, of course, Athens, the Acropolis, the Acropolis Museum are iconic sites that draw millions of tourists every year.  But there are so many, many other sites around this country that also have enormous potential.  It’s a question of marketing, a question of branding, a question of packaging.  And it requires collaborative, strategic effort that brings together municipalities, experts, the institutions themselves, tourism-hospitality sector workers and companies, and local communities – all of whom can bring their efforts together.  And that’s very much what this conference is intended to advance.

I’ve been in Greece about two and a half months but one of the great pleasures of being American Ambassador is that you get to travel a lot.  I’ve been to Thessaloniki, visited the spectacular Jewish Museum there, and I’m very excited that our experts coming from the United States will be able to spend some time up in Thess[aloniki] as well, which is such an important center of Greek history.  But also travelling in Crete.  Two weeks ago I was at the spectacular, spectacular new museum in Eleftheria which very few people have visited, it’s a little bit off the beaten path, but it is surely worth the trip and figuring out how to take advantage of that.  And, again, it’s not just the classical heritage but the modern history as well.  You’ve got platforms… I also loved the Maritime Museum in Chania which, again, tells an important part of the history of modern Greece.

So I very much look forward to hearing from the team what some of the advice and the expertise concludes.  I am very proud that we have two world class American experts who are here – Rosemary Reyes who comes from the, I forget this, the Left Coast of the United States, New York on the East Coast, and then John [Giurini] who comes to us from California, my home city of Los Angeles, one of America’s newest and greatest museums, the Getty.  And I’m very much committed, not just to taking advantage of their expertise over these couple of days, but also continuing to grow these partnerships between Greek and American institutions.  Because it is part of how we build the fiber of our bilateral relationship and the people-to-people ties that are such a compelling aspect of the alliance between the United States and Greece, which will be part of how we continue to work as hard as we possibly can to help Greece move forward.

So thank you very much and, again, especially to our partners from the Benaki who I know have been great allies and partners in this effort and very much look forward to seeing the conclusions from the next couple of days.  Thank you.