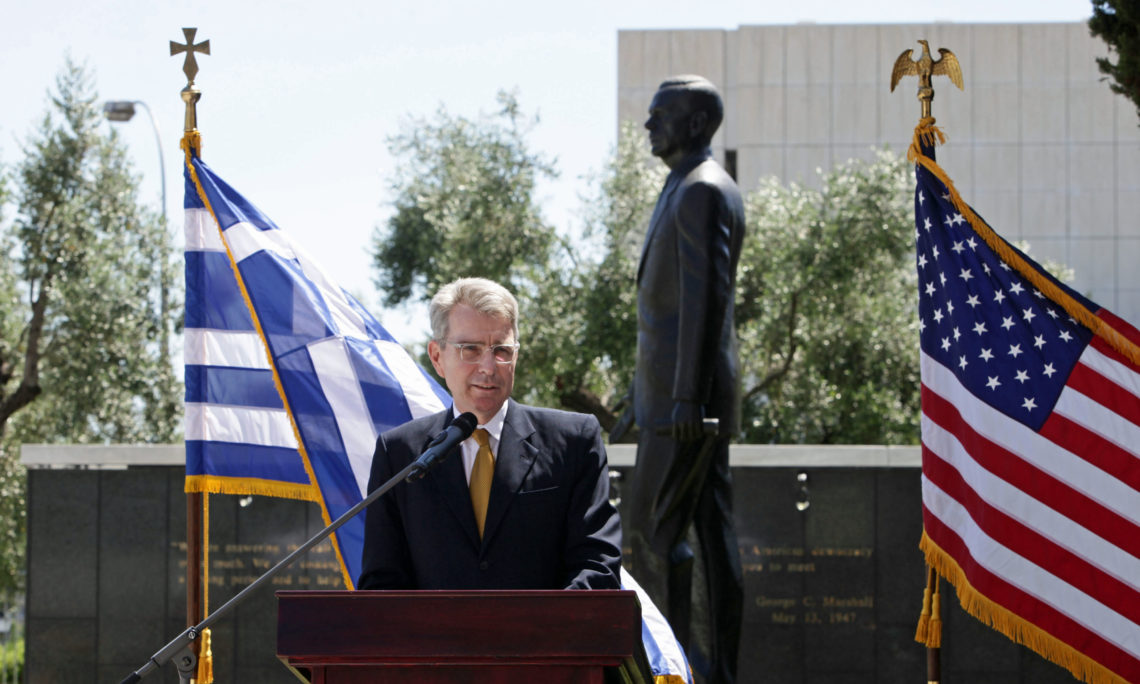 Ambassador Pyatt’s Remarks for the 70th Anniversary of Marshall Plan

First of all, I want to thank everyone: the many colleagues from the diplomatic core, our partners from the Greek government, and many other friends of the United States and the Marshall Plan for joining us today.

It’s a particular honor to welcome Minister Stathakis, who I was watching on television at the cabinet meeting just a minute ago, so I know he’s come here very quickly.  But most importantly, I did not know, until we started to organize this event, that Minister Stathakis actually wrote his Ph.D. dissertation on the Marshall Plan, so he should be giving this speech instead of me. I also want to welcome in particular [Deputy] Foreign Minister Quick and Secretary General Paraskevopoulos, who you will hear from in a few minutes, Admiral Apostolakis, of course, and our two Nea Demokratia Vice Presidents who are with us today, Mr. Georgiadis and Mr. Hatzidakis, and all of our many other distinguished guests.  It is a real honor to welcome you here at the U.S. Embassy.

Holding an event in front of the road at rush hour would not be the way we would usually organize things, but I thought it was very important and appropriate to do so today in front of the statue of Secretary of State George Marshall.  Back in the year 2000, my distinguished predecessor, Ambassador Nick Burns, and AHEPA worked together to create a monument to Marshall’s legacy.  Now, that statue is a testament to the legacy and to the great contributions of Greek-Americans and AHEPA, in particular, to our strong bilateral relationship.

Almost exactly 70 years ago, Secretary of State Marshall delivered a commencement address at Harvard University that would change the course of European history.  During that speech, Marshall said that “The United States should do whatever it is able to do to assist in the return of normal economic health to the world, without which there can be no political stability and no assured peace.”

With those words, Secretary Marshall set the cornerstone of our transatlantic relationship with Greece and with our other European allies.  Our political, economic, and military alliance is, first and foremost, based on our commitment to fundamental, democratic values and our people-to-people ties.

To fully appreciate the impact of the Marshall Plan, it’s important to remember how the world was back in 1947.  President Truman and Secretary Marshall could see that Europe truly was on the brink of collapse.  But President Truman’s decision to step in and to provide billions of dollars in aid to war-torn Europe was not popular at the time.

In 1946, the American people were not in favor of greater engagement or investment in Europe after the great cost of World War II – in blood and treasure.  But, as we got into the winter of 1946 and the spring of 1947, American policy makers realized that, without decisive American measures to help Europe get back on its feet economically, all that we fought for in the Second World War could be lost.  And the amount of U.S. financial assistance to Europe, and to Greece, in particular, was, truly, unprecedented.  Between 1947 and 1953, the United States offered 16 European countries a total of $13.3 billion in assistance, the equivalent of $150 billion today, in loans and grants.  It was 12% of the U.S. federal budget at the time.

Importantly, though, Secretary Marshall emphasized that it was up to Europeans to take the lead in this recovery project.  As he put it, “It would be neither fitting nor efficacious for the U.S. Government…to draw up unilaterally a program designed to place Europe on its feet economically.  This is the business of the Europeans.”  In that regard, Marshall’s Harvard speech was also a challenge to the Europeans to work together after years of conflict.

History has proven that the Marshall Plan was one of the United States’ wisest foreign assistance investments.  This really was the beginning of the United States’ modern transatlantic relationship and our relationship with our other European allies and partners.  U.S. support to Greece, through the Marshall Plan and other post-War programs, amounted to about two billion dollars, which would be worth more than 21 billion dollars today.

These funds were used to restore and expand agricultural and industrial production.  And I was glad to see, as Minister Stathakis and I looked at some of the displays today, that one of those industrial loans was about a half million dollars that went to the Fix brewery and, as a Fix customer, I can appreciate that investment at the time.  It also went to repair transportation routes; to upgrade health facilities and services; to reestablish sound currencies and financial viability; and stimulate international trade, both among European countries and between Europe and the rest of the world – principally the U.S.

Here in Greece, Marshall Plan funds came at a time when the Greek population was literally starving, suffering tremendous hardship in damaged homes and bombed-out businesses.  Agricultural production was down 70 percent and industrial infrastructure had suffered an 80 percent loss.  Through the Marshall Plan, over 6.5 million tons of U.S. food and supplies reached the people of Greece.  Millions of dollars in loans were approved for businesses in the agricultural and industrial sectors, which helped modernize production, equipment, and factories and created thousands of new jobs.

The transportation infrastructure of Greece was completely transformed.  Really, the Marshall Plan touched every aspect of Greek recovery after World War II – in too many ways to describe fully here this afternoon.  But I know, from the many anecdotes and stories I’ve heard from Greek friends over the past year, that U.S. assistance in this period literally transformed lives for Greek citizens.

But the most important legacy of the Marshall Plan is the partnership between the United States and our European allies – both bilaterally and through our international institutions, most importantly, the EU and NATO.  The Marshall Plan is a concrete example of how great change is possible through bold thinking and international cooperation.  As a result, Europe has enjoyed a historically unprecedented period of peace and prosperity, while the United States has remained committed to our goal of a continent whole, free, and at peace.

The values that the Marshall Plan represents – democracy, solidarity, economic development, free enterprise, and respect for the rule of law – are as essential now in addressing today’s challenges as they were in 1947.  And we are honored to celebrate that legacy with you today.  With that, I’ll turn the floor over to our distinguished guests from the Greek government.

Thank you, Admiral Apostolakis and Ambassador Paraskevopoulos, for your remarks today.  I want to offer one other thank you before we turn it over to a more informal conversation.  I hope everybody will take time to look at the Marshall Plan exhibition, which is in the cases here and on the posters behind us.  This would not have been possible without the generous support of three of our strong partners here: one is the Piraeus Bank Cultural Foundation; another is the Benaki Museum photographic archives; and the third is the Museum of the Agriculture University of Athens.  There are some extraordinary artifacts here, which, I think, help to underline the significance and the ambition that the Marshall Plan represented.

I want to conclude by simply thanking, again, all of our partners who are here today and all of the generous comments that I have heard with people’s individual reflections on the Marshall Plan.  And I can’t offer a toast, because I don’t have a drink with me, but I will just conclude by saying:  Ζήτω η Ελλάδα, Ζήτω η Αμερική.  Thank you very much. 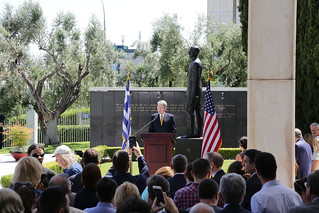