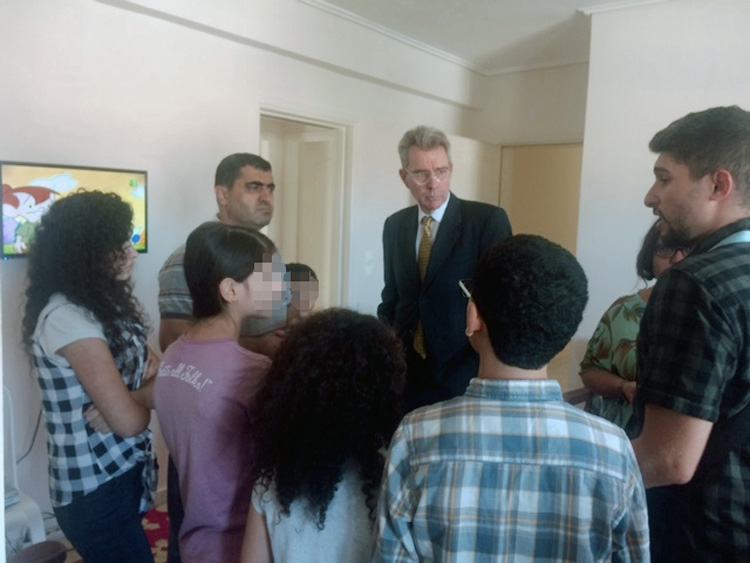 One of my strongest impressions from my first year in Athens has been the extraordinary compassion of the Greek people in managing the challenge of the European migration crisis. In this regard, we can all learn a lesson from the welcoming and generous citizens of Livadia.

In November 2016, Livadia became the first Greek city outside of Athens and Thessaloniki to pilot UNHCR Greece’s “Accommodation and Services Scheme,” which has already helped 570 refugees find a home and a decent lifestyle with dignity in 70 apartments around the city while they await final determination on their asylum and resettlement requests. Of these 570 beneficiaries, 211 have already been resettled elsewhere in Europe.

During my visit last week to the capital of Boeotia, I met with one of these beneficiaries: a Syrian father of seven children, who is living in Livadia while waiting to reunite his family with his wife and oldest son in Germany. He effused over Mayor Giota Poulou’s kindness toward him and his children, and he referred to the hard-working employees of the Public Benefit Organization of the Municipality of Livadia (K.E.DH.L.) as members of his “family.” Watching the Mayor interact with this Syrian family was heartwarming and, for me, captured the definition of philoxenia better than any dictionary.

I was impressed by K.E.DH.L.’s efforts to integrate the beneficiaries of the program into the city. Along with Greek students across the country, 195 children from this program started the school year in Livadia on September 11, and working hand-in-glove with the NGO Refugee Solidarity Network, Livadia sensitizes city residents to their new neighbors and creates peaceful coexistence between them. While this program generates over one million euros annually for the local economy, I never heard this held out as a justification. Instead, the Mayor and the citizens of Livadia told me simply that it’s “the right thing to do.”

It is the right thing to do, and the U.S. is actively supporting UNHCR’s efforts here in Greece and in neighboring regions to help address what has become the largest refugee crisis in modern history. Beyond our large assessed contribution to UNHCR, the United States has donated $72 million to UNHCR’s Europe Crisis Response, which includes Greece and the Balkans, as well as $2.8 million to the International Red Cross and Red Crescent Movement in Greece to bolster this country’s response to the refugee crisis.

U.S. Embassy Athens has also prioritized our support to Greece’s refugee response, providing a series of grants to support the work of excellent Greek NGOs, including Angalia in Mytilini, Faros, and Metadrasi. Last year, we worked with Impact Hub Athens and the Onassis Cultural Center to organize Hack the Camp, a creative “hackathon” that identified practical solutions to challenges that refugees face in Greece. We are currently partnering with the Melissa Network of Migrant Women on a series of short films about the lives of refugee women.

On integration, the U.S. Embassy supported the efforts of NGO Doctors of the World in offering English classes to camps throughout Greece, and through a $1 million State Department grant, we created the “Education Unites” program, offering academic scholarships at partner schools including the American College of Greece in Athens and the Anatolia College and American Farm School in Thessaloniki. The program will bring 200 refugee students from camps to campuses for the academic year 2017-2018.

Livadia is a very ancient city, whose charm and unique topography used to draw people from all over the world to visit one of ancient Greece’s foremost oracles to hear how they could better face current troubles and improve future prospects. And as we see all of the asylum facilities in Greece and around the world being flooded with twice and three times the number of refugees they are supposed to hold, I am comforted that the citizens of modern Livadia are continuing their ancient tradition, helping hundreds who have been displaced by war and chaos find a better future. During my visit, I urged my European colleagues to come here and see for themselves, and this is exactly why.

I congratulate Mayor Poulou, K.E.DH.L, UNHCR, the Refugee Solidarity Network and the citizens of Livadia for their pioneering humanitarian work, and look forward to continued U.S. support.