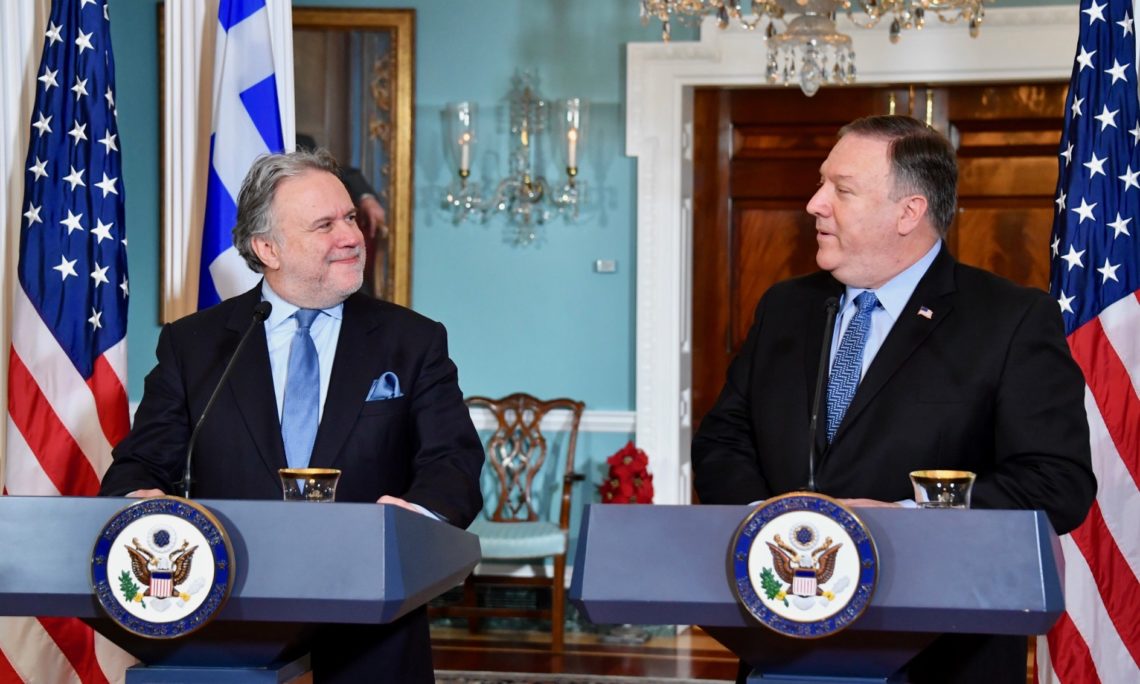 The text of the following statement was released by the Governments of the United States of America and Greece on the occasion of the U.S.-Greece Strategic Dialogue.

The Governments of the United States and Greece held the inaugural U.S.-Greece Strategic Dialogue in Washington, D.C. on December 13, 2018. U.S. Secretary of State Mike Pompeo and Greek Acting Minister of Foreign Affairs George Katrougalos launched the Dialogue, which included high-level interagency representation from both countries.

The Strategic Dialogue builds on a year of intensive engagement, highlights the strength of the bilateral relationship, and confirms the mutual commitment of the United States and Greece to deepen cooperation in the areas described below.

The United States and Greece shared views of the Eastern Mediterranean and Balkans, noting their common vision for a peaceful and prosperous region, the need to integrate the countries of the Western Balkans into European and transatlantic institutions, according to the choice of their people, and the aim of further linking partners in the Eastern Mediterranean in a framework of political and economic ties. The two countries underlined the importance of respect for international law and the peaceful resolution of differences, as a guiding principle to good neighborly relations and as a means to resolving problems and addressing tensions. The United States lauded Greece’s leadership and vision in promoting regional stability and cooperation, in particular, Athens’ initiatives in the Eastern Mediterranean and the Balkans to facilitate common regional economic and security benefits, as well as in reaching the Prespes Agreement with Skopje and working towards its implementation. The two sides also reviewed investment and infrastructure development in the Western Balkans. Greece emphasized the continued challenges related to refugees and migrants in Europe, and the two governments discussed the possibility for U.S. support in this area. Greece discussed its trilateral partnerships in the Eastern Mediterranean and the United States expressed interest in increasing its support for the Greece-Israel-Cyprus trilateral discussion, as invited.

The United States and Greece discussed common security concerns, such as international terrorism and instability in the Eastern Mediterranean region and reaffirmed their commitment to further enhance their strategic defense and security partnership, which promotes stability and prosperity in the region and contributes to the strength of NATO. The two governments also expressed their desire to modernize and expand their multifaceted defense relationship in order to better meet the needs of both countries and to more effectively address regional and global security challenges, citing recent successes in combined joint training and security exercises, and an increase in our joint activities.

Both sides emphasized the importance of their cooperation on law enforcement and counterterrorism issues that has led to many important successes in the areas of convictions, seizures of weapons and many-hundred kilogram quantities of illicit narcotics, repatriation of antiquities, and disruption and dismantling of transnational criminal organizations. The United States highlighted Greece’s participation in the Visa Waiver Program and the positive progress Greece has made toward fulfilling the commitments of the 2016 Joint Statement. The two governments committed to enhance law enforcement cooperation, including in the areas of information exchange, border security cooperation, and countering illicit activity.

Building on the positive momentum from the Thessaloniki International Fair, Greece, and the United States committed to boosting bilateral trade and investment, including in key sectors such as energy, defense, IT, entertainment, and infrastructure. The United States congratulated Greece on its exit from financial support programs and on opening a new economic chapter, while acknowledging the challenges Greece still faces as it continues on the path to recovery. The United States highlighted the increasing role of Greece as an energy, transport, and commercial hub in the region, and the two countries committed to cooperate in further strengthening this role. The United States and Greece committed to work together to strengthen intellectual property rights protection in Greece. The United States reaffirmed its support for Greek efforts to make the necessary reforms to improve competitiveness, with the two sides committing to continued engagement through the Trade and Investment Working Group.

The two governments noted the need to improve Europe’s energy security and diversification, highlighting the recent spot purchase of U.S. LNG and ongoing negotiations for a long-term supply agreement. The United States commended Greece’s progress on energy projects to expand regional interconnectivity to include the enlarged Revithoussa LNG terminal, the Trans-Adriatic Pipeline, and the Greece-Bulgaria Interconnector, and supports additional infrastructure designed to diversify routes and supplies, to include the proposed LNG terminal in Alexandroupolis and the Eastern Med pipeline, where commercially feasible. The two sides also discussed cooperation on renewables and clean and efficient coal technologies. The United States supports Greece’s joining the Three Seas Initiative and related efforts to strengthen Europe’s North-South interconnectivity.

Both sides recognized the strong people-to-people ties connecting the two countries and the vital role these ties play in fortifying the bilateral relationship. The two governments discussed ways to increase cooperation between museums, student exchange programs and English language programs, and celebrated the summer 2019 launch of the FLEX exchange program. The United States announced the selection of Greece as the host for the first-ever Gilman Scholar Regional Summit, expected to take place in 2019. The two sides also reaffirmed their commitment to the Fulbright Program on its 70th anniversary.

The United States and Greece look forward to continuing these discussions throughout the coming year, with the aim of reviewing progress at the next Dialogue in Greece in 2019.