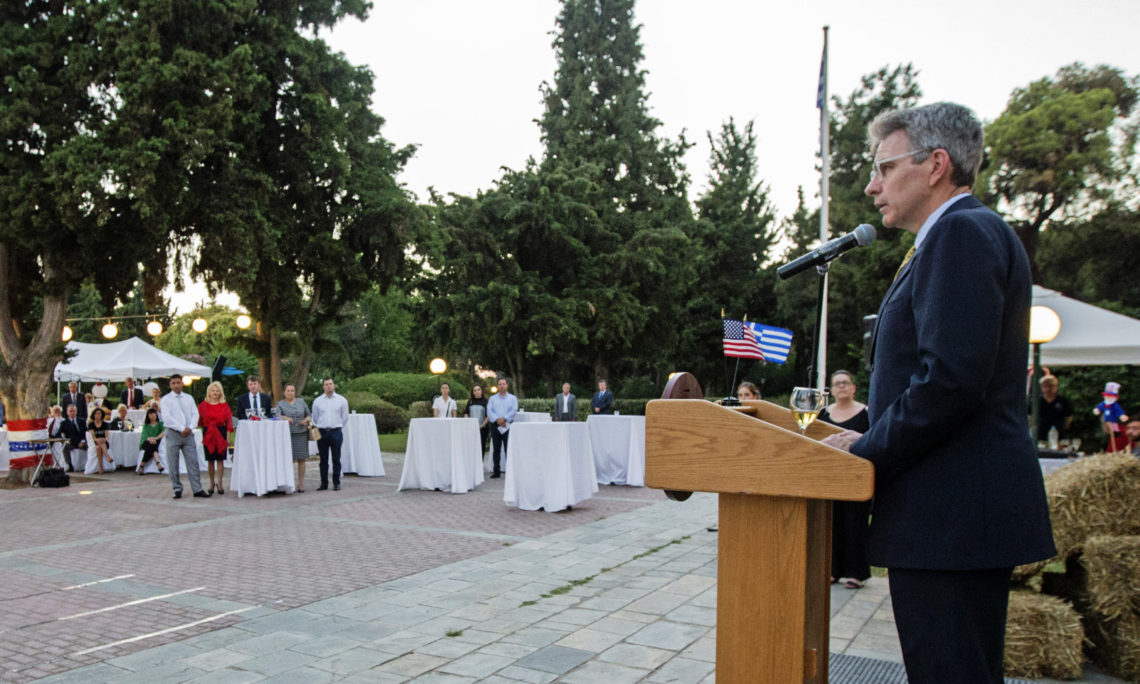 Thank you very much, Rebecca, for hosting us. And thank you to everybody here this evening who has joined us to help celebrate the American Independence Day here in Northern Greece. I want to in particular acknowledge Mayor Boutaris, who just arrived, the various other deputy mayors, Members of the Parliament, and leaders from across Northern Greece who are with us this evening.

Of course, I would also like to thank the American Farm School, our friend Paras for hosting us this evening at this beautiful institution as they have done for so many years. The American Farm School is an exceptional American institution that has given outstanding opportunities to generations of Greek and foreign students, including many national leaders of this country who I encounter every day. As I’ve said before, the American Farm School truly represents the best of America and our longstanding partnership with the people of Greece. We are very, very grateful for your continued cooperation and support of the American cousins in Northern Greece.

Today we celebrate 241 years of American democracy, and there is no place better-suited to mark the occasion than here in Greece. In 1776, a small band of patriots declared that we were a people created equal — free to think, worship, and live as we please; that our destiny would be not determined for us, but by us. And it is not a coincidence that those patriots were inspired by Greek concepts of democracy, freedom, and honor. The values of the Ancient Greeks had a profound impact on my country’s founding fathers, particularly on Thomas Jefferson as he penned the Declaration of Independence.

Just as Greece inspired Jefferson, the American Revolution inspired many nations, including Greece, to fight for their freedom and democracy. In 1823, Jefferson wrote that Americans, more than any other people, supported Greek independence because Greece was the first civilized nation to demonstrate what it means to be free and autonomous. For diplomats, like me, those democratic values and ideals are often the strongest calling card that we take to far-flung destinations. And that is why I am so pleased to be here in Thessaloniki as we celebrate this fundamentally American holiday — a holiday that celebrates the idea of ‘America.’

Of course, it’s always a special pleasure for Mary and me to be in Thessaloniki. This is a city that has left a strong impression on both of us during our first year in Greece. It is a uniquely cosmopolitan city, a “city of ghosts” whose food, memorials, and architecture invoke its historical role as a cultural and civilizational crossroads. But it is also — as I was reminded last week when I visited Washington and New York with several outstanding Greek companies from Northern Greece — a thriving commercial center whose businesses are taking Greek products to global markets. And, it is one of Greece’s greatest academic centers, as I’m reminded every time I have the opportunity to visit your universities and colleges.

Northern Greece is also emerging as an energy hub, from the oil fields near Kavala to the strategic natural gas infrastructure, both planned and being built. This region plays a critical role in energy security as I saw during my visit to the TAP pipeline construction site earlier today.  And I should add, I hope everybody in Greece will be able to have the opportunity that I had today to see the extraordinarily impressive work that the TAP consortium is doing here in Northern Greece.

From Alexandroupolis to Trikala, from Kozani to Drama, the U.S. is committed to helping American and Greek firms work together to revitalize this dynamic region. This is one of the reasons that I am so thrilled to have the United States as the Honored Country at the 83rd annual Thessaloniki International Trade Fair next year in 2018. As part of our participation in next year’s TIF, the U.S. Embassy in Athens and our Consulate General in Thessaloniki will organize a program of events across Northern Greece highlighting our unique heritage of American arts, technology, and popular culture.

Bilateral cooperation between our two countries is strong, and I’m confident that our relationship will continue to prosper, propelling our nations forward, over the coming year. We look forward to collaborating with our friends and colleagues in Northern Greece as we showcase the very best of America right here in Thessaloniki. So we all have our work cut out for us.

I also want to thank all of our generous contributors who made today’s event possible and all of those who will work with us over the coming year, including, in particular, our partners at the AmCham to make next year’s TIF a resounding success.

So to close, I would like to propose a toast to the Declaration of Independence, to Greek philosophy, and to the concepts that inspired our founders and continue to inspire our work today.