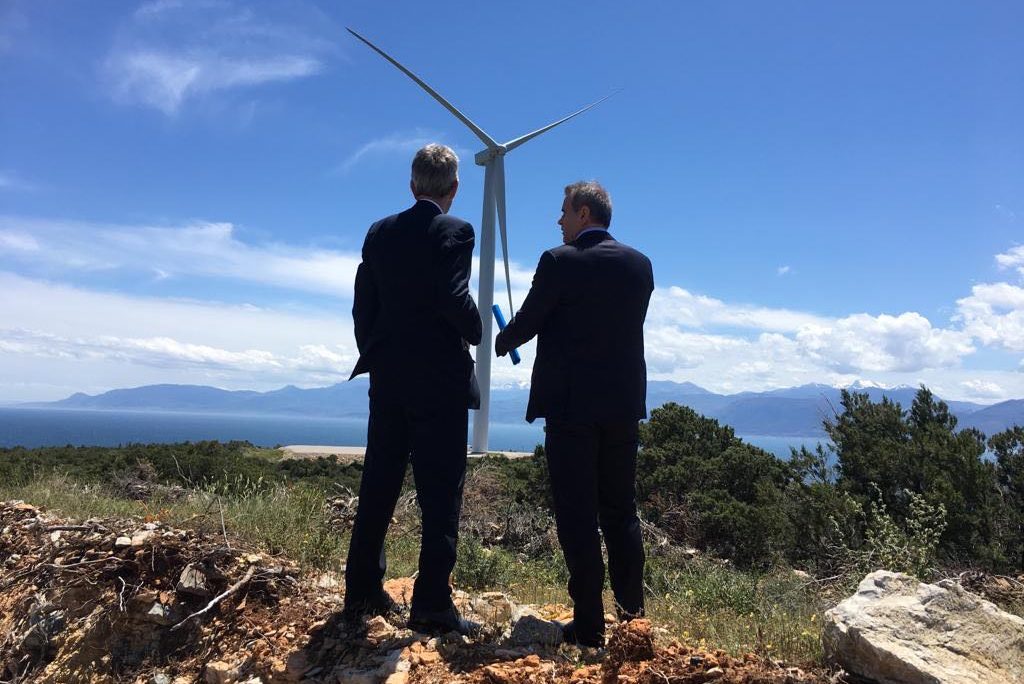 Καλημέρα.  Boy, what a beautiful view from up here.  I’m very honored to be able to join our partners from Nostira and GE, as well as my dear friend Bishop Gabriel and Father Nektarios on this beautiful corner of Greece in Kato Lakomata as we inaugurate the first Greek wind energy park to feature GE turbines.

I spoke at the GE Wind Energy Solutions Conference in 2017, and a few weeks ago, I was in Lamia talking to Governor Bakoyannis and his team about his region’s strong commitment to alternative energy.  So it’s really great to see all these ideas come to fruition.  I was able to speak with Governor Bakoyannis as well as we drove up here this morning, and we agreed that today is a very, very good day for the U.S.-Greece relationship.

The same mountainous coast that makes the view of the Gulf of Corinth from this spot so stunning also, of course, creates real logistical challenges, and I want to commend GE, Nostira Renewable Energy, Fortress Investment Group, and all the contractors on reaching this milestone, the first of three wind farms that GE is installing through 2019.

Together, the three wind parks will generate 96 megawatts of electricity, placing Nostira among the top eight wind producers in Greece, and forming a crucial element of the country’s ambitious energy strategy.

I want to commend Greece on its commitment to renewable energy, which echoes that of my home state of California.  During the decade-long economic and financial crisis, Greece managed to almost triple its wind capacity with an investment of around 2 billion euros.  Greece is well on track to exceed the European Union’s mandate that all members generate 18 percent of energy from renewables by 2020.  And this year alone, Greece will install 400 megawatts, and Kato Lakomata is a big piece of that.

Over my three years in Greece, I’ve seen dramatic changes in the energy market that demonstrate that the vision of Greece as an energy hub, a vision that we share with the Greek government and the European Union, is becoming a reality.

The U.S. is the world’s leader at combining wind, solar, and storage technology and connecting it with existing grids, so I’m delighted that GE, as well as other American companies like Tesla are exploring opportunities in this sector of the Greek economy.  Increased use of renewables further diversifies sources of supply and promotes a more competitive market to the advantage of consumers.

A few weeks ago, I was able to visit another Greek company, Raycap in Drama, a firm that provides essential components to the global wind power industry, including GE’s turbines.  I was very impressed to hear from Raycap how they’re expanding their operations in Drama, hiring local Greek talent, but also investing and expanding in the U.S. to take advantage of our rapidly growing renewables sector.

With a presence in Greece for over 100 years, GE has a significant footprint in the Greek power market with a market share of over 50% in conventional and thermal energy sectors, as well as strong partnerships with major Greek companies like Mytilineos just down the coast from us here.  GE Renewable’s Onshore Wind business has positioned itself well in Greece over the past 3 years, and I’m enthusiastic about the fact that they will connect over 150 MWs of clean energy to the national grid by the end of this year.

Renewables are the future, and Greece and its neighbors will play an important role in developing the next generation of technologies that will deepen energy diversification.

You of course know that the ancient Greeks, expert seafarers, deified the four winds.  They portrayed the winds as winged men or horse-shaped divinities in deference to the winds’ legendary power—as we’re seeing now.  So as Greece continues to expand its renewables sector, may the άνεμοι  bless these efforts by lifting the Greek economy to fantastic new heights.   Ευχαριστώ πολύ.