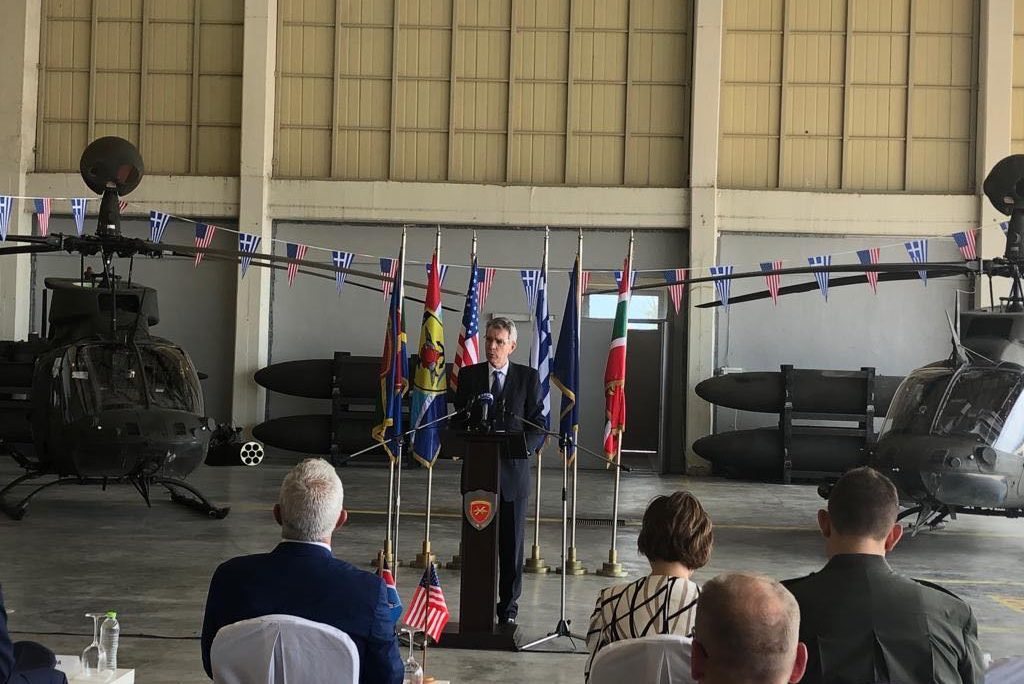 Καλημέρα σας.  Minister Apostolakis, General Christodoulou, General Kambas, Deputy Assistant Secretary Cataldo: I want to start by saying what a terrific honor it is for me to be here in Stefanovikio and to be part of this celebration as we deliver the final Chinook helicopter and celebrate the arrival of 70 Kiowa helicopters, both of which are important additions to Hellenic military capacity and tangible evidence of our growing alliance.

I should start by congratulating Minister Apostolakis on a very successful visit last week, the week before, to Washington, where he met at the Pentagon with Secretary of Defense Shanahan and with leaders of the State Department and in Congress.

As the tempo of our military engagement with Greece has increased, the minister and I have seen quite a bit of each other in recent weeks, and the welcome that he received at the Pentagon is a sign of our governments’ mutual commitment to deepening our collaboration.

As I said to General Christodoulou in our conference this morning, I had my own meetings in Washington last week, at the White House, at the State Department, at the Congress, and the stock in the U.S.-Greece relationship today is at an all-time high point. And my discussions with experts outside of the government revealed strong appreciation of the importance of sustaining and deepening the investment that we are making in each other’s security.

In this context, I want to warmly welcome back to Greece Deputy Assistant Secretary of Defense Cataldo and thank her for taking a late-night flight to be here with us today.  Deputy Assistant Secretary Cataldo has been instrumental in bringing both of these helicopter programs to fruition.  She has been a strong advocate for Greece since her visit here in 2016, and her yearly engagements with the Greek pavilion at the Association of the U.S. Army trade show, the “flagship” U.S. defense industry convention in Washington, demonstrates that.

This is a season of anniversaries, as we just marked the 75th anniversary of D-Day, which laid the foundations for the Allied victory on the Western Front during World War II.  A lot has changed since our Allied forces landed on the beaches of Normandy to establish a free, whole, and peaceful Europe.  But today’s complex security environment calls for that same level of cooperation between countries to ensure a strong and secure future, and in this regard, Greece and the United States have always stood together.

We are in the midst of the busiest summer exercise schedule that Europe has seen in many decades.  Nine different military exercises will be conducted across this continent, giving tens of thousands of partner and allied service members the opportunity to come together to address conventional and asymmetric threats.

These exercises underscore the importance of our collective investments in defense and our efforts to streamline logistics and enhance cross-border movement between U.S. allies and our partners.  These efforts also demonstrate how easily these exercises can return on a host country’s investment.

Sabre Guardian is one of those exercises, and I was very impressed and grateful to see how capably the Greek military supported the 650-plus vehicles that arrived recently at the Port of Alexandropoulis, and how quickly those military vehicles were sent on their way to five separate locations throughout Eastern Europe to participate in that exercise.

Hellenic forces have gone above and beyond, not only providing logistical support to Sabre Guardian, but once again supporting with an armored platoon that demonstrates their competence and quality, while offering another opportunity to develop interoperability in our forces.

Of course, the main reason we’re here today in Stefanovikio is to celebrate the arrival of the last Chinook helicopter, which brings the total number of Chinooks in the Hellenic Army to 25, and to introduce 70 Kiowa helicopters into the Hellenic Army.

This Chinook is the final of 10 that were delivered to Greece over the past year and a half.  The first nine Chinooks went straight into service, not only supporting the Hellenic Army but also playing a vital role in Greece’s fire-fighting efforts over the past two summers.  This is one of the fastest and heaviest lifting helicopters in the U.S. inventory.  It has remained in production and frontline service for over 50 years.  With its twin-engines and tandem rotor, it’s a powerful and well-built aircraft that will contribute greatly to Greek safety and security.  And in this regard, I particularly want to salute and thank the Chinook crews that were part of the Greek response to last summer’s tragic fires in Mati and Kinetta.

The Kiowas represent a different kind of opportunity: an important addition to Hellenic military capability at a tremendous savings.  The Kiowas will cover an immediate gap in Greece’s attack and observation helicopter requirements and will further the Hellenic Army’s goal of establishing two operational aviation brigades, enabling stronger Greek participation in NATO and EU operations.

Not all 70 Kiowas will go into operation.  Thirty-six have been identified for a fully mission-capable role, while 20 will be used for training, and the remainder will be used for spares and other requirements.  This additional aviation capability comes to Greece at a tiny fraction of the cost of new or even used aircraft.

And once the Kiowa is in service, it will increase military savings, since this airframe can share the burden of some missions flown with more expensive aircraft like the Apache, but at a cheaper operational cost, while extending the life of the more expensive helicopters.

This Kiowa project illustrates how the more closely our nations work together, the more we’ll see opportunities and benefits compound.  For example, the arrival of these aircraft during the recent uptick in U.S.-Greece bilateral exercises will provide increased opportunities to train together and to improve the interoperability of our forces.

These opportunities will increase this fall when the 3rd Combat Aviation Brigade participates in winter training here in central Greece, giving aviators and sustainers a chance to exchange cultures and technical skills, growing stronger together.  As I heard from the U.S. aircrews I met during their orientation in Thessaloniki this spring, there are many U.S. pilots and mechanics who are proud to say they flew or worked on the Kiowa, and I am confident that in a few years, many Greeks will be proud to call the Kiowa theirs as well.

This is an exciting time for Greece, especially for the Greek defense industry.  As we saw last month, the P-3 midlife upgrade is in full swing at the Hellenic Aerospace Industry, which is gaining the skills and facilities necessary to serve as a regional leader.  The F-16 upgrade line is about to reopen, and we have begun important discussions about new naval ship manufacturing and the sale of Greek Block 30 F-16s.

There are many other ways that the U.S. and Greek militaries, academia, and defense industries can collaborate to address the requirements of the future.  The Kiowa represents opportunities here as well.

Although it is a time-tested airframe, the Kiowa is also a proven, versatile platform for innovation and modernization.  Other partners and allies in the region also have Kiowas, so Greece is strongly positioned to lead multinational modernization and upgrade efforts.  I’m confident that Greek companies have the expertise and the ingenuity to keep the Kiowa flying for decades to come.

As the D-Day planners knew well, working together to seize an opportunity and achieve potential is not easy—but now, as then, the payoffs are worth the effort.  Deputy Assistant Cataldo can testify to the tremendous effort that the United States government has already invested in these programs.  Plans to deliver the last 10 Chinooks span three defense ministers and four Chiefs of Staff of the Hellenic Army.

The Kiowa program came together much more quickly, but aligning our bureaucratic processes to gain approval to grant the aircraft with hundreds of millions of dollars in spare parts, and meet year-end budget deadlines was a Herculean feat.  And in this regard, I would like to extend my deep, personal appreciation to all of those officials and officers, both current and former, in both of our governments who made this accomplishment possible.

If we can apply the same creativity and tenacity in realizing these programs’ full potential, then I am sure that these efforts, like all of our work together, will bear mutually beneficial and enduring fruit for our long-term defense and security partnership.