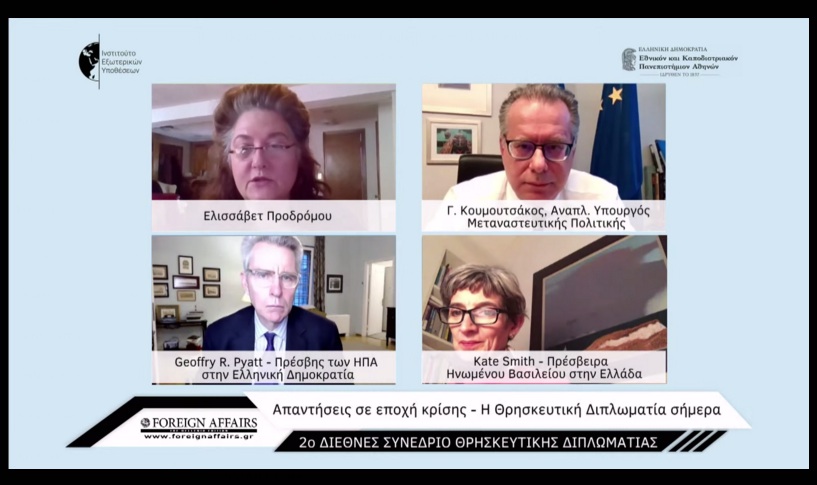 “The U.S. and Greece: Partners in Advancing Religious Freedom”

Thank you very much, Elizabeth, and καλησπέρα everybody.  Minister Koumoutsakos, colleagues, friends, I want to start by thanking Loukas and Foreign Affairs Greece, the National and Kapodistrian University, the Archdiocese of Athens, and the Ministry of Foreign Affairs for inviting me back for this second International Conference on Religious Diplomacy.

Before I begin, I want to join many others in offering my best wishes and περαστικά to Archbishop Ieronymos, who thankfully now is in much better health.

But I must say, I greatly appreciated the Archbishop’s candor in sharing his recent ordeal with COVID-19 and his emphasis thereafter on the fact that we all need to work together to defeat the pandemic and carefully follow the advice of medical professionals, especially in the coming Christmas season.

I’m especially honored this year to be speaking on a panel with my friend, Minister Koumoutsakos, my dear colleague Ambassador Smith, the Chargé of the UAE, and of course, Professor Prodromou, who is somebody whose work on these issues I admire greatly.

I want to start by underlining that, for the United States, the right to worship freely is fundamental to our national identity.  And indeed, inspired America’s first settlers to voyage across the Atlantic Ocean to present-day Massachusetts, where they landed exactly 400 years ago in the early winter of 1620.

Four centuries later, religious freedom remains a core objective of U.S. foreign policy, enshrined in our First Amendment, along with the provision that the government respects all religions equally.

For the United States, religious freedom is also a universal human right that has been tested throughout history.  It’s one of the shared democratic values that strongly links the peoples of the United States and Greece.

America’s founders fought for independence in 1776 in part to guarantee their freedom to worship as they saw fit, and they in turn supported the Greek Revolution in 1821 so that Greeks could enjoy the same freedoms.

Americans deeply respect the Greek Orthodox Church, which preserved Greek culture through centuries of Ottoman rule.  And friends from Patras have described for me how Orthodoxy ignited the revolution when Bishop Germanos raised the standard of revolt over the Monastery of Agia Lavra in the Peloponnese.  And we very much look forward to working with Greece to mark this bicentennial next year.

Our countries have stood together, shoulder to shoulder, for nearly two hundred years, and to this day, the Greek Orthodox Church continues to reinforce the deep and long-standing bonds between our two peoples.

Many Greek Americans preserve their Greek heritage largely through the church, and the American traditions of philanthropy and service go hand in hand with the Orthodox belief in good works and loving one’s brothers and sisters.

The Greek Orthodox Church has also demonstrated courageous moral leadership in the United States during our civil rights movement and continues to advance our shared belief in inalienable human rights.

The image that we all saw this spring of Archbishop of America Elpidophoros marching in a Black Lives Matter protest in Brooklyn following the killing of George Floyd instantly brought to mind the iconic image of his predecessor, Archbishop Iakovos, walking at the side of Martin Luther King, Jr. during the famous march in Selma, Alabama.

In his first year and a half as Archbishop of America, His Eminence Archbishop Elpidophoros has done much to deepen the already strong people-to-people ties between our countries.  I’m very grateful to count him as a friend and a collaborator in our mission to build on the foundation of democratic ideals shared by Greece and the United States.

Archbishop Elpidophoros has also shown great leadership and compassion in his response to the COVID-19 pandemic, and he has helped Americans in our journey to perfect our democracy by standing in solidarity for a more just and equal society.  I know that he will play a crucial role in America’s celebrations of Greece’s 2021 bicentennial.

And of course, the U.S. government is a strong supporter of the Ecumenical Patriarch, the spiritual leader of Orthodox Christians around the world.

When Secretary Pompeo met with His All Holiness in Istanbul three weeks ago, they reaffirmed our common vision to support religious freedom around the world, whether in Turkey or in Ukraine.

As strategic partners, Greece and the United States also work together to respond to the challenge that Russia poses to our democratic values and specifically to the freedom of religious expression here in Europe.

Russia has earned a worrisome designation from our Commission on International Religious Freedom as a “country of particular concern” for engaging in systematic, ongoing, and egregious violations of religious freedom.

Not only does Russia challenge the authority of the Ecumenical Patriarch, but it has continued seeking to break the unity of the Orthodox Church by fomenting instability and undermining the sovereignty of independent Orthodox-majority nations.

Last year, when the Ecumenical Patriarch granted autocephaly to the Orthodox Church of Ukraine in accordance with the wishes of the Ukrainian people, Russia responded by breaking ties with His All Holiness.

The Russian Orthodox Church then proceeded to cut ties or threatened to cut ties with other churches that have followed the Ecumenical Patriarch’s lead.

The Russian Church has also attempted to punish Greece by instructing Russian Orthodox tourists not to visit Greek dioceses that supported the decision to grant autocephaly to the Church of Ukraine.

And just this month, Metropolitan Hilarion, on behalf of the Russian Church, falsely claimed that the Ecumenical Patriarch had initiated a schism.

We commend the Church of Greece and Archbishop Ieronymos for bravely supporting the Ecumenical Patriarch’s decision, and we hope that over time, other Orthodox churches will follow this lead in accordance with canon law.

Eventually, we hope the Russian Church will reconcile with the Church of Ukraine, recognizing the sovereign right of the Ukrainian people to choose their own future and own means of worship.

Further away, it’s no surprise that China, another country with different interests and values from the United States, is also a “country of particular concern” for our Commission on International Religious Freedom.

Independent experts estimate that between 900,000 and 1.8 million Uighur, Kazakh, Kyrgyz, and other Muslims have been detained in more than 1,300 concentration camps in the Chinese province of Xinjiang.  Meanwhile, authorities in Xinjiang and other parts of China have destroyed or damaged thousands of mosques and removed Arabic-language signs from Muslim businesses.

The United States, I want to underline, is committed to protecting religious freedom where it is under attack, and we are proud to stand with partners like Greece and the Ecumenical Patriarch, who advocate tirelessly for those seeking to exercise their beliefs.

We see this mission as both a moral and a national security imperative.  In countries where religious freedom flourishes, terrorism and violent extremism are rare.  Economies blossom, civil societies become stronger and more diverse, and opportunities expand.

So we applaud Greece for continuing to demonstrate its support for religious freedom to the rest of the world.

Just last month, to cite an important example, the Greek government opened the first public, government-funded mosque in all of Europe.  The mosque will be a place of worship for thousands of Muslims in the Athens region.  From its grounds, visitors can look up to see the Acropolis, the Sacred Rock of the ancient world.  The opening of this mosque is a shining example of Greece’s support for its religious minorities.

We believe in transparent engagement across faiths with the aim of promoting interfaith dialogue, religious tolerance, and diversity.  That’s why the U.S. Embassy also regularly engages with the muftis and metropolitans of Thrace, just as we engage with religious leaders across Greece.

The U.S. Embassy also continues to support Greece’s Jewish community and to promote respect for Jewish beliefs and practices.

During his visit to Thessaloniki this fall, Secretary of State Pompeo commemorated Yom Kippur by lighting a candle at the Jewish Museum’s Hall of Names, which honored the estimated 45,000 Thessaloniki Jews who had lost their lives during the Holocaust.

I know the Secretary was deeply moved by this ceremony, which he called a sobering reminder of the work “we must continue to do to fight anti-Semitism and educate young people about the evils of the Holocaust.”

In this same spirit, our Consulate in Thessaloniki honors the memory of its employee David Tiano, who was executed by the Nazis in 1942.  Every year, we sponsor a lecture in his name that seeks to foster dialogue and educate citizens about the Holocaust and the important history of Thessaloniki’s once vibrant Jewish community.

The United States strongly supports the Greek government’s efforts to build a world-class Holocaust Museum in Thessaloniki, and we look forward to Greece presiding over the International Holocaust Remembrance Alliance next year.

I’m also very proud of the cooperation agreement our Embassy helped to arrange between the Greek Ministry of Defense and the U.S. Holocaust Memorial Museum in Washington DC.  I was delighted to witness the signing of this agreement by Minister Panagiotopoulos last January during Prime Minister Mitsotakis’s visit to the United States.

Under that agreement, Greece agreed to share its Holocaust archives with the museum so that researchers around the world can study how the Nazis and their allies treated Jews and other ethnic, religious, and political groups during the war.

Sadly, acts of violence against religious groups continue to occur around the world, including in Greece and the United States.  In this regard, we stand with Greek officials in vehemently condemning acts of vandalism against Jewish sites in Greece, which remind us all that we have still more work to do to fight voices of hatred and intolerance and educate the next generation.

The United States is very proud to work with the Greek MFA to defend religious freedom and promote interfaith dialogue around the world.  And proud of our role in the International Religious Freedom Alliance that Ambassador Smith referred to.

To conclude, I want to underline that the U.S.-Greece relationship has never been stronger, so as Greece enters its bicentennial year, you can be sure that we will remain clear-eyed and determined guardians of religious freedom and all of our shared democratic values in the Eastern Mediterranean region and beyond.