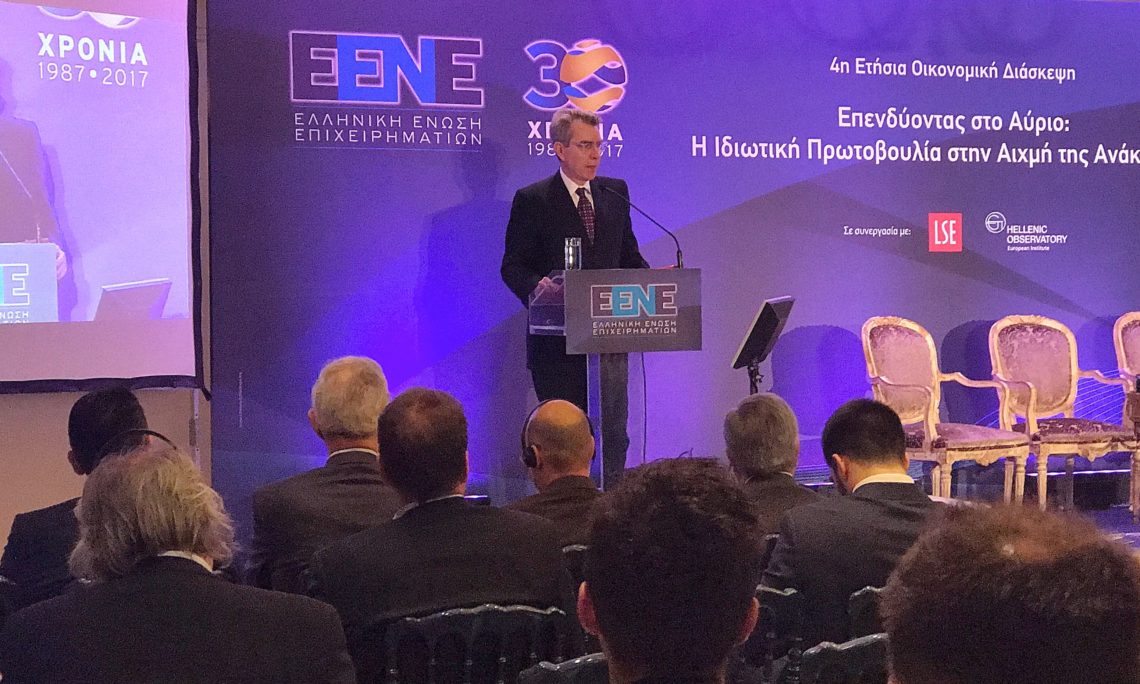 Καλημέρα.  Good morning.  Governor, Mr. Mayor, Minister Tzanakopoulos, it’s my honor to be joining you in speaking this morning.  I want to thank Dr. Apostolopoulos and the Hellenic Entrepreneurs Association for giving me the opportunity to speak here this morning.

To be clear, the United States has a strategic interest in Greece’s escape from its years long crisis of economic growth and seeing Greece restore its status as a strong NATO ally and a stable pillar of the European Union and the Eurozone.  But no matter where you go in the world, it is the private sector that is the driving engine of the economy.  As the private sector succeeds in growing and creating jobs, Greece will prosper.

As I’ve noted on several recent occasions, I think we are at a pivotal moment for the Greek economy.  With the proper investment conditions, this summer could be a turning point.  But it is important for the Greek government to send a strong signal to the broader foreign investment community that the time is right to pursue business opportunities in Greece.  I am confident that investment will increase as the Greek government demonstrates its commitment to supporting private-sector-led growth.

Greece will certainly reap the benefits of diversifying its investor pool – to include major and influential interested groups from the United States.  And this, in turn, would enhance and strengthen the bilateral trade and investment ties between the United States and Greece.  As Ambassador, I want to support and encourage more American investment here in Greece – to create jobs and help create private-sector-led economic growth.

As part of the United States’ support for Greece, I will lead a delegation of Greek business leaders to Washington D.C. and New York in a few weeks, accompanied by Minister Papadimitriou – for the SelectUSA Summit and the Greek Investment Forum.  This trip will highlight the investment opportunities for Greek companies in the United States as well as investment opportunities for American and other companies back here in Greece.  A number of terrific Greek companies are joining us at the SelectUSA Investment Summit to expand their presence in the American market – including Creta Farms, Pyramis, Laconic Gardens, SibaSoft, Maris Polymers, Petsiavas, Coltech, and Danaos Management Consultants.  I look forward to talking in the U.S. about the opportunities I see for expanded American commercial ties with Greece and to share the confidence that I have in Greece’s future.

But, despite the challenges, despite the opportunities, I am not naïve about the many challenges Greece confronts.  Nonetheless, I have met resilient and innovative entrepreneurs – across every sector in this country, from Thessaloniki to Crete – who are succeeding in starting and growing businesses.  In Trikala, young Greeks are using technology to innovate old industries – for example, I visited a dairy facility with cutting edge production lines that now export to the United States.  Indeed, I am convinced that one of the great untold stories in Greece today is the successful startup culture.  These young entrepreneurs are succeeding in sectors from medical radiology to traditional Greek cuisine and everything in between.  And I am proud of the fact that, for many of these startups, their preferred partners are American.

Meanwhile, large Greek companies like Titan Cement, Lavipharm, Raycap, and Intralot, and other great examples of Greek businesses, have increased prosperity on both sides of the Atlantic.  I want to share these stories, and others from my time here in Greece, with American investors – to underscore the tremendous human capital, entrepreneurial spirit, and great potential for successful U.S. investment here in Greece.  We’re also working on the Southeast Europe Trade Winds regional trade mission this fall, which will give U.S. businesses the chance to explore the Greek market and potential partnership opportunities here on the ground.

The United States and Greece have a shared interest in seeing the Greek economy stabilize and develop.  We are eager to see U.S. companies expand their existing investments and invest in new ventures here in Greece.  And, of course, while I’m eager to see U.S. companies invest here, the U.S. Government does not control whether that happens or not – unlike some non-market economies.  U.S. business leaders will make their own investment decisions based on whether a project will bring value to them and their shareholders.  While I’m happy to encourage U.S. companies to take a look at Greece, and I will underline the U.S. Government’s strategic interest in Greece’s success, it is ultimately up to the government and the Greek business community to create the conditions that will lead to large scale foreign investment.

That said, I’m encouraged by my conversations with leaders from large American companies who have recently made the decision to invest millions of dollars here in Greece.  American investors are the largest nationality invested in companies listed on the Athens Stock Exchange and are significant stock holders in Greek Blue-Chip companies like OTE.

Beyond the stock exchange, there are other real opportunities for investment in Greece.  The energy sector, in particular, shows significant scope for growth.  Other industries that already show robust U.S. investment here in Greece include: information, communications, and technology, consumer goods, medical devices, chemicals, agricultural equipment, defense and aerospace, security, pharmaceuticals, travel and tourism, food and restaurants, financial and professional services.  There is a lot of room to grow.

Of course, one of the most effective ways of attracting new U.S. investment here in Greece is to take care of the companies that are already here – to create the necessary conditions so that they can expand their existing investments.  Keeping current investors happy is simpler and more cost-effective than courting new investors.  Current investors can also spread the word that Greece is a great place to grow.

For example, U.S. pharmaceutical companies in Greece are playing a key role in overcoming obstacles to attracting research and development here.  By increasing that foreign investment, Greece could support hundreds of high-paying jobs and generate significant revenue for the country.  As Minister Papadimitriou and I have been discussing, increasing pharmaceutical research and development in Greece is realistic and doable.  Furthermore, it can be realized relatively quickly, provided that obstacles are removed and that the right incentives are put in place by the Greek government to ensure this country is a competitive option that embraces our companies and investors as partners in economic recovery.

Needless to say, even with the reforms that have already been implemented, I know the Greek government wants to do more to improve the business and investment climate.  This includes moving forward on key privatizations.  While there has been progress on some privatizations, delivering billions to Greece and sending a positive signal to investors that there are big opportunities coming up in that area, other large projects have stagnated.  Moving quickly on these other high-profile privatizations will encourage additional investment and we look forward to seeing progress on those issues in the near future.  Of course, privatizations are also foreign investment opportunities.  A U.S. company winning a bid for a Greek privatization project could send strong market signals and attract greater American investment.  I’m very hopeful that will happen during my tenure.

In general, any improvements the Greek government makes to the business and investment environment will positively impact all companies – Greek, U.S., and other foreign firms – and will, ultimately, benefit the economy at large.  A strong economy will help Greece maintain and expand its capacity as a pillar of stability in this, often, unstable region.  We want Greece to realize its full potential as a guardian of our shared, democratic values.  I remain enthusiastic about Greece’s potential for private sector growth in the coming months and years.  I hope to see great progress during my tenure here in Greece and look forward to celebrating some notable successes at next year’s Annual Forum.  Thank you very much.