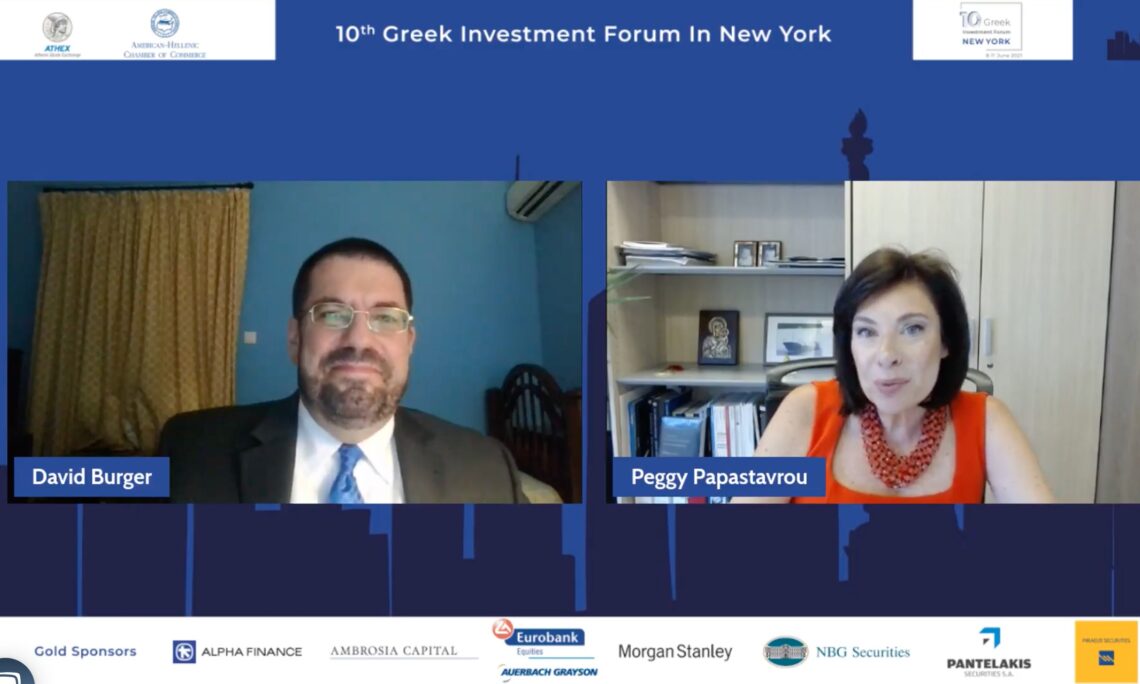 I know you wanted Ambassador Pyatt, and I’m very sorry that he could not be here with you tonight.  I know he has missed traveling to Washington and New York for the annual summer roadshow, and he was thrilled to ring the ATHEX opening bell recently.

On his behalf and on behalf of the entire U.S. Mission team, I would like to thank AmCham and ATHEX for all of your efforts in helping us take the U.S.-Greece trade and investment relationship to the next level.

I’m very happy to talk about business and investment opportunities in Greece because the U.S.-Greece relationship is at an all-time high.  And so the time to take these opportunities is now, to echo the comments from the two ministers just before.

We have a very positive story to share about Greece’s emergence as a digital and clean energy hub in southeastern Europe.

As many of you probably know, this year is the two hundredth anniversary of the Greek Revolution.  And the U.S. Embassy has launched a campaign called “USA & Greece: Celebrating Two Hundred Years of Friendship” to complement the important work being done by the Greece 2021 Committee.

The goal of the Embassy’s campaign is not just to lift up the stories of brave American philhellenes who fought alongside Greeks, but to honor the democratic values that form the foundation for our countries’ 200-year friendship and to chart a course for a more peaceful and prosperous future for all of us.

In his message to the Greek people on Greek Independence Day, President Biden stressed that he’s personally committed to taking the U.S.-Greece relationship to the next level.

This is a president who knows Greece very well and is extraordinarily aligned with the Greek government on so many important issues.

As President Biden told Prime Minister Mitsotakis in their phone call, the United States will work very closely with Greece to pursue sustainable economic recovery in the wake of the pandemic.  And it’s clear from the presentation of the two ministers we just heard that the Greek government is committed to just that.

Thankfully, Greece is well positioned to emerge early and strongly in the post-pandemic recovery era.  The government’s prudent, data-driven management of COVID-19 has helped it perform better than many other countries in Europe and has dramatically improved its reputation among other EU member states.

And it’s a tribute to Prime Minister Mitsotakis’s team that after strong advocacy from the Greek government, the European Union is moving forward with the EU Digital COVID Certificate, which will facilitate freedom of movement and economic recovery efforts.  This is yet another example of Greece setting a high standard for the European response to COVID-19 and leading on the digitization front.

Greece will be able to access about 32 billion euros in EU recovery funds, and the Prime Minister’s Greece 2.0 plan will target a significant portion of those resources towards the digital and the clean energy sectors.  This is a particularly auspicious moment for companies in those sectors.

We recommend that companies looking to invest in Greece seek to mirror these priorities because they have the potential to dramatically change the Greek economy and increase Greece’s role in the European and transatlantic digital economies.

The United States government sees fantastic opportunities for Greece, especially in technology and innovation, and we are eager to help Greece take full advantage of the great progress it has made in recent years.

During the pandemic, Greece launched an ambitious and successful campaign to digitize government in partnership with U.S. companies like Cisco, Google, and Microsoft.

Greece is determined to rapidly scale up its digital economy, and the United States is its preferred partner in this effort.  With sweeping reforms to protect intellectual property and a recently passed Digital Governance Code, Greece is creating an enabling environment for digital investment that has attracted leading American tech companies.

Microsoft is the headliner in this space, having committed hundreds of millions of dollars to build three data centers near Athens that will position Greece at the forefront of European cloud computing services.  This is a gamechanger, projected to add 100,000 jobs to the local economy by 2025.

Microsoft President Brad Smith has emphasized that Microsoft’s investment is rooted in our countries’ shared values.  He said, “As the beacon and birthplace of democracy, Greece can and should become a role model of digital democracy.”

In addition, the U.S. role as Honored Country at the 2018 Thessaloniki International Fair continues to bear fruit, catalyzing Thessaloniki’s development into a hub for technology and innovation.

Companies like Pfizer, Cisco, and Deloitte have expanded their footprint in the city, capitalizing on the value proposition that Greece’s skilled workforce represents and targeting the wider Balkan market of 30 million people.

The Embassy is continuing its efforts to support the innovation ecosystem in Thessaloniki and to nurture the entrepreneurial DNA that our countries share.  This fall, we will open a new TechLab in Thessaloniki, our sixth American Space in Greece, which will help us teach STEM skills to Greek young people, skills that they will need to lead Greece’s digital revolution.

This agreement will expand the strategic relationship between our countries, opening new opportunities for collaboration in research and innovation.  It will also help our countries work together to combat climate change.

The clean energy transition is a top priority for the Biden-Harris administration, and we see Greece as a regional leader in this space.

Greece is positioned to be among Europe’s major generators of wind and solar power.  We are proud that U.S. companies like Quantum Energy Partners, GE, Ameresco, Blink, Tesla, Lime, Invenergy, Envipco, and Advent Technologies are bringing American technology and expertise to the Greek clean energy market, investing in energy storage, grid infrastructure, e-mobility, and the circular economy.

As President Biden has made clear, climate change is the greatest challenge of our age, but it’s also the greatest opportunity for innovation and future prosperity.

So you can see why the United States is so bullish about Greece’s post-pandemic rebound and the future of our countries’ trade and investment ties.

Our countries are growing closer in every sector of the economy, including tourism, where American demand to visit Greece is skyrocketing.  There are now nine direct flights from the United States to Greece this summer, more than we’ve ever had before.  And I think this very much reflects how the U.S. market is looking at Greece today.

Our Embassy team will do all that we can in partnership with the Greek government and the private sector to continue to facilitate trade and investment opportunities between our countries and to drive our 200-year friendship to even greater heights.

I am confident in Greece’s dynamic and prosperous future.  The sky is the limit for what our countries can accomplish together.  Efcharisto poli.