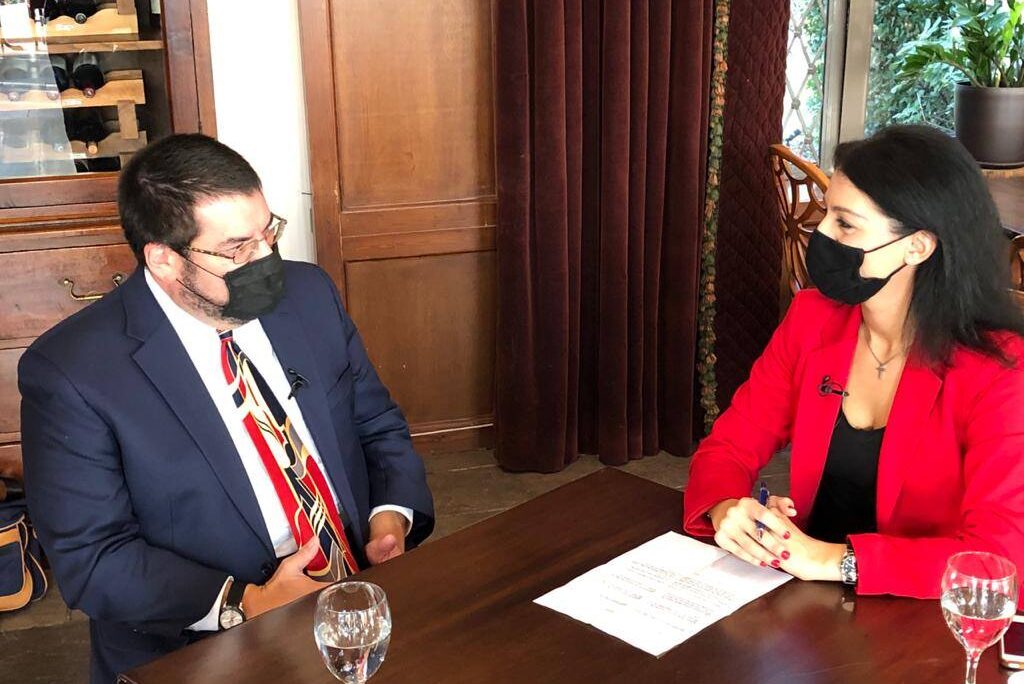 Eleftheri Thraki: What does your visit to Alexandroupoli signify?

DCM Burger: Alexandroupoli plays a strategic role in the United States and Greece’s shared vision of building European energy and regional security. Our Ambassador has visited Alexandroupoli a record number of five times, and several other U.S. officials have visited, including representatives from our U.S. Development Finance Corporation which has identified Alexandroupoli as a strategic priority.

This high level attention reflects our vision of Alexandroupoli as being poised to become a regional hub for energy, transport, and commerce with the ongoing privatization of the port, completed market test for the FSRU terminal and plans for a gas-fired GE power plant. And one of the key goals of my visit is discuss how we can further deepen our engagement and investment opportunities.

The geostrategic location of Alexandroupoli’s port and its rail and road networks feeding into Eastern Europe also offer an important channel for the transport of troops and equipment to and from the Balkan and Black Sea regions. The port’s ongoing privatization, combined with its improved access thanks to the passage of the U.S.-Greece Mutual Defense Cooperation Agreement and flexibility due to the U.S. Army’s removal of the Olga in 2019, creates excellent opportunities to boost the Greek economy.

The United States is committed to continuing to develop this important maritime asset to advance our joint defense and security goals and economic interests with Greece.

Eleftheri Thraki: Beyond the Port, and the declared American interest for it, do you foresee any other important investment by American companies in Thrace?

The American investment fund BlackSummit Financial Group is leading the way here with a strong consortium that includes U.S. investors, Greek participants, and a European port operator with regional experience to bid on the Alexandroupoli and Kavala ports. We were also encouraged to learn that a Houston-based infrastructure company, Quintana, has put in a bid for Alexandroupoli port.

Our Assistant Secretary for Energy Frank Fannon also recently visited Komotini and Kavala to review the progress of energy projects such as the Interconnector Greece-Bulgaria (IGB) pipeline. During this visit he also held discussions with Gastrade regarding the FSRU and with Energean.

I have greatly enjoyed my meetings here and the opportunities I’ve had to discuss expanding our presence in the region and deepening U.S. investment and engagement here. As I mentioned, the United States is committed to working with Greece to advance our shared security, energy and economic interests, and we consider Thrace to be an excellent gateway of opportunity.

Eleftheri Thraki:  President George Bush senior had visited Samothraki island during one of his visits. Is tourism part of the American plans for assisting this border area of Greece?

DCM Burger: We see a lot of potential here: commercially, strategically, and in the tourism sector. Now, I’m a little jealous of President Bush because I still have not visited Samothrace. I hope to do that very, very soon.

But I can definitely see the potential for the improvement of tourism, and I think the more that companies come here, the more rotations we have of U.S. forces and so on and so forth, they’ll see the beauty of the area, and they’ll definitely come back.

Eleftheri Thraki:  What is your opinion on recent tensions in the eastern Mediterranean?

DCM Burger: The United States remains committed to bolstering Greece’s role as a pillar of stability in the Eastern Mediterranean.

The United States firmly believes that development of the Eastern Mediterranean should promote cooperation and provide a foundation for the durable energy security and economic prosperity of the entire region. We strongly support the resumption of crucial exploratory talks between Greece and Turkey.

The current tensions must be resolved diplomatically and in accordance with international law. As our spokesperson recently underscored, coercion, threats, intimidation, and military activity will not resolve tensions in the Eastern Mediterranean. Unilateral actions cannot build trust and will not produce enduring solutions.

Eleftheri Thraki:  What’s your assessment of the U.S. – Greece relations and what did the visit of Secretary Pompeo signify for northern Greece?

DCM Burger: As Secretary Pompeo said during his visit last month, U.S.-Greece relations are at an all-time high and getting stronger every day. Greece is a critical partner with which the United States shares key strategic goals. The United States is committed to Greece’s security, prosperity, and continuing democracy, and our Strategic Dialogue is a testament to our two countries’ ongoing and enduring engagement.

The Secretary’s visit to northern Greece highlighted our strong and diverse partnerships here—from trade, investment, and energy to education and a shared commitment to religious freedom. Northern Greece plays an essential role in our shared effort to see all the countries of the Western Balkans continue their integration into European and Transatlantic institutions.

Much of the U.S. engagement and progress we’re seeing today goes back to the seeds we planted in 2018 at the Thessaloniki International Fair, when the United States was the honored country. These seeds have now begun to bear fruit — whether that’s in terms of the new technology centers for Pfizer, Deloitte, Cisco, what IBM is doing here, or what Microsoft is doing. All of these world-class American technology companies are calling Greece home. I think there is a lot more room for growth!

The Science and Technology Agreement that was signed in Thessaloniki during Secretary Pompeo’s visit also paves the way for closer science and technology ties between our countries that will continue to improve Greece’s investment climate and opportunities.

As I mentioned above, Greece is also key to Europe’s energy diversification, as a hub for new infrastructure that will diversify natural gas routes and supplies coming to Europe, including growing supplies of U.S. liquefied natural gas. This role will become even more important as the U.S.-supported Floating Regasification Unit comes online in Alexandroupoli. This is but another testament to the important role northern Greece plays and will continue to play in the strategic interests of the United States.

I’m here to build on this tremendous progress and discuss ways we can further advance our investments and engagement.

Eleftheri Thraki:  About the American election next month. Do you think that the result of the election, whatever this may be, may cause changes in the US commitment for defense and investment in Greece?

DCM Burger: Of course, I can’t comment on the actual election results themselves or on the candidates, but a really great news story about the U.S.-Greece relationship is that it’s bipartisan in the United States. There is no difference of opinion really between Republicans and Democrats. We see that in the support that Greece is getting on Capitol Hill from both the major parties.

The U.S.-Greece relationship is going to remain strong no matter who is elected president. We have started this Strategic Dialogue process with Greece in 2018; we have built much stronger ties commercially, economically, people-to-people, and strategically; and I think none of that’s going to change. If anything, it will keep getting better.