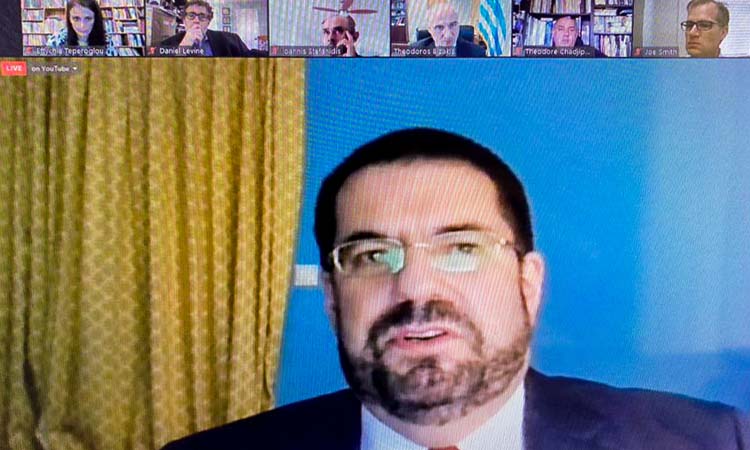 You will not be surprised to hear that much of what I have to say is really very similar in line with my colleague in Washington.  I think we see the situation very much the same way.

So thank you very much to Aristotle University and to the University of Alabama for having me with you here today.

Over the past several years, we have seen U.S.-Greece relations reach an all-time high.  And we are working together with Greece to take this relationship to the next level under the Biden-Harris administration.

In his address to the Greek people and his phone conversation with Prime Minister Mitsotakis on March 25 to commemorate the Greek bicentennial, President Biden described how, for two hundred years, our nation’s fates have been intertwined, bound together by our shared democratic values and a common commitment to liberty, human rights, and the rule of law.

President Biden knows Greece and the Greek people extremely well, and he has expressed his personal commitment to take our bilateral relationship to the next level and to work together with Greece to pursue sustainable economic recovery in the wake of the global pandemic.

Already, the new administration has widened the spectrum of U.S.-Greece collaboration.  In addition to our traditional areas of collaboration in recent years—regional cooperation, defense and security, law enforcement and counterterrorism, trade and investment, energy, and people-to-people ties, all of which are part of our annual Strategic Dialogue—we’re also seeing enhanced cooperation with the Greek government on climate change and healthcare.

Let me start on these newer areas of cooperation.

In his remarks at the Delphi Economic Forum, U.S. Special Presidential Envoy for Climate John Kerry drew links between the climate crisis and many of the other themes under discussion: geopolitics and security, the global economy, the future of Europe, the future of technology, and sustainable Greek growth.  He urged us all to do more to avoid the most catastrophic consequences of the climate crisis by limiting the Earth’s warming to 1.5 degrees Celsius.

The United States is moving quickly to earn back our leadership position in tackling the climate crisis.  President Biden rejoined the Paris Climate Agreement and convened the Leaders Summit on Climate last month to get the leaders of the world’s major economies to set out how we can keep global warming to 1.5 degrees.  The President also committed to reducing U.S. greenhouse gas pollution by 50 economy-wide over the next ten years.

In addition, Greece is positioned to be among Europe’s major generators of wind and solar power.  And we are proud that U.S. companies are bringing American technology and expertise to the Greek clean energy market, investing in energy storage, grid infrastructure, e-mobility, and the circular economy.

The U.S.-Greece Science and Technology Agreement signed last year will provide even more opportunities for collaboration in climate science and environmental fields.  The agreement allows us to more easily launch joint research initiatives and convene experts from our governments, academia, and the private sector.

We also commend Greece on leading a new initiative to protect cultural and natural heritage from the impacts of the climate crisis.

Special Envoy for Climate Kerry emphasized that the climate crisis “is one of the world’s greatest opportunities for partnership and prosperity, as our work with Greece demonstrates.  It is the biggest economic transformation staring us in the face since the Industrial Revolution.”

We all appreciate the Greek government’s effective response to the COVID-19 pandemic.  And I, living here in Athens, especially appreciate it.  From the start of the pandemic, Greece’s data-driven approach has saved lives and served as a model for Europe.  And now, Greece is building a wall of immunity with its digitally driven vaccination campaign, now routinely vaccinating over 100,000 people a day.

The global pandemic has strengthened and validated the healthcare partnership between our countries.  I’m very proud of the role that American science and innovation is playing to help augment Greece’s COVID-19 response, and I know that the Biden-Harris administration is committed to deeper cooperation.

We all owe huge thanks to Albert Bourla, a proud son of Thessaloniki, who has worked so hard with his colleagues at Pfizer to bring the first effective vaccine to the global marketplace.  And thanks to other U.S. companies like Moderna, Johnson & Johnson, Lilly, Gilead, and Abbott, we can now see a post-pandemic landscape and begin economic recovery.

The Biden-Harris administration sees global health security as a critical component of our national security, and I am confident that the United States will continue to play a leading role in the global vaccination effort, recognizing that none of us is safe until all of us are safe.

We have no doubt the Biden-Harris administration is also going to remain focused on the more traditional areas of cooperation in our bilateral relationship.  This cooperation is taking place in the context of rising levels of strategic competition from great powers such as Russia and China – both of whom have very different values than we do in the West.

In particular, President Biden and his administration have been clear that one of the big global challenges we confront is how to encourage China to play by the rules of the game, to support the rules-based, international order that has built prosperity and peace for all of our countries.  Greece is a very important partner as we work with all of our European partners on that issue as well.

We face the growing threat of Chinese malign influence in Europe as China exports its algorithm-driven authoritarianism and works to control trade and transportation routes across Eurasia through its Belt and Road Initiative.

Meanwhile, Russia’s growing military presence in the Eastern Mediterranean, from Syrian bases to Wagner mercenaries in Libya, profoundly destabilizes the region.  We also see Russia’s attempts to foment instability by breaking the unity of the Orthodox Church and manipulating energy resources to extract political concessions.

We commend Greece’s efforts to reinforce stability and prosperity in the Eastern Mediterranean and Western Balkans.

We remain committed to the EU integration of all six Western Balkan aspirants, and we appreciate Greece’s leadership to ensure the accession process continues to move forward.

We also continue to strongly support cooperative frameworks like the 3+1 process with Greece, Israel, and Cyprus.

Specifically on the pillars of the Strategic Dialogue, in Defense and Security, at this time of rising strategic competition, the transatlantic bond is more important than ever.  We are building on NATO’s track record as history’s most successful alliance to gear up for new challenges.

The United States’ commitment to our NATO Alliance remains ironclad, and we are working with allies like Greece to build interoperability and readiness.

The many joint exercises and ship visits we’ve conducted in recent weeks highlight the accelerating tempo of our military-to-military relationship, which is anchored in our updated Mutual Defense Cooperation Agreement (MDCA).  These engagements show the whole world that Greece and the United States stand shoulder to shoulder, together in support of regional peace and security, just as we have done for the past two centuries, and especially after World War II.  Both of our governments, at the highest level, are committed to extending the duration and reach of the MDCA.

Earlier this month, U.S. and Hellenic Armed Forces came together at the Port of Alexandroupoli for DEFENDER-Europe 21.  The arrival of the vessel Liberty Promise at this strategic port to offload over 300 pieces of equipment for this large-scale exercise highlighted Greece’s key position at the nexus of maritime routes bridging Europe, Asia, and Africa.

And of course, we are fully committed to our bid for the Hellenic Navy’s Frigate Modernization Program, whose unique co-production approach gives an important boost to the Greek shipbuilding industry and to Greece’s long-term security, creating hundreds of new jobs.

On Trade and Investment, Greece has undergone a dramatic digital transformation, and has accelerated that under Minister Pierrakakis, taking steps to become the technology and innovation hub of Southeastern Europe in partnership with U.S. companies like Microsoft, Digital Realty, and Amazon Web Services.

Meanwhile, Cisco, Pfizer, and Deloitte are realizing the value proposition offered by Thessaloniki, with its large student population, supportive government environment, and proximity to the Balkan market of 30 million people. And I think this addresses Professor Stefanidis’s point that the United States does have responsibility and is well-advised to back up our rhetoric with strong investment. And that’s exactly what we’re doing.

Throughout the pandemic, Greece and its neighbors have continued to redraw the energy map of Southeast Europe, diversifying energy sources and routes and embracing technological advancements in green energy.

We are proud to see two strong U.S. bidders in the Alexandroupoli and Kavala port privatizations. In addition to the transit of forces, these ports support critical energy infrastructure like the Alexandroupoli floating storage and regassification unit and the natural gas power plant. The U.S. International Development Finance Corporation is also interested in these projects.

On Counterterrorism and Law Enforcement, we’ve greatly accelerated our cooperation in recent years. Greece and U.S. share information on numerous platforms to ensure criminals and terrorists don’t slip through the cracks, which is especially critical given Greece’s location as a gateway to Europe. And despite the global pandemic, outstanding U.S.-Greece law enforcement cooperation on arrests, seizures, and extraditions has continued unabated.

Greece is continuing to take steps to enhance its security, including moving forward on a biometric ID card.

We believe we have a unique window of opportunity to advance and consolidate the U.S.-Greece educational relationship. And it’s been impressive to see how Minister Kerameus and her team have continued to pass dramatic reforms to the Greek educational environment with a major focus on the advancement of what the Greek government calls “extroversion,” the development of relations with the rest of the world. And we hope this means continued development of our ties across universities, including Aristotle University.

We’re also continuing our commemoration of the Greek bicentennial with our year-long campaign, “USA and Greece: Celebrating 200 Years of Friendship,” which is designed to highlight the role of American philhellenes in the Greek Revolution, honor our countries’ strong people-to-people ties, and look to the future of our strategic relationship.

The United States is revitalizing our ties with our allies and partners, including with our closest friends in Europe, to reinvent partnerships that were built years ago so they’re suited for today’s and tomorrow’s challenges.

We appreciate our strong cooperation with Greece across all of these areas, and we look forward to taking our bilateral relationship to the next level in the months and years ahead.

Thank you again for inviting me.