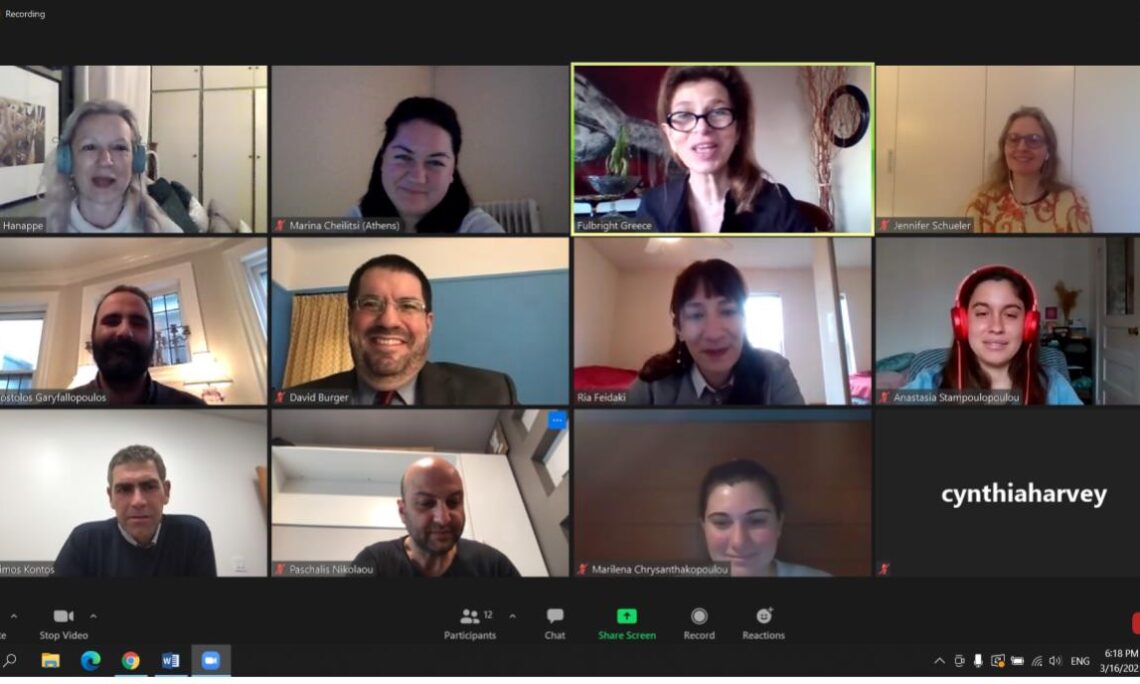 Thank you very much, Artemis. It’s wonderful to see you. We’ve missed seeing you in person for almost a year. Hopefully soon, here in Athens we’ll get together. And wonderful to see everyone. Kalimera to everyone in the United States. Kalispera to everybody here in Greece.

As Artemis noted, it’s a really exciting time for the Fulbright Program and really just to be an American diplomat in Greece. This is, of course, the 75th Anniversary of the Fulbright Program in Greece. It’s the second oldest Fulbright program in the world. So you follow in the footsteps of many terrific students and scholars from the past. Fulbright Greece has awarded over 6,000 scholarships over the years. You’re following a lot of really amazing people.

And Fulbrighters are in many ways diplomats and ambassadors even much more than I am. You live in a place, you build these educational ties and cultural ties with whatever community you happen to land in in the United States. And, of course, we’re very proud to have Americans come here to Greece and do much of the same thing. And you really have a very important role to bring a piece of Greece to the United States, introduce your country to my fellow citizens. And when things open up again, and we can have more Americans come here to Greece, we want them to do the same thing here.

It’s also an exciting time to be in Greece because we’re doing so much great work with the Greek government on really expanding the horizons of U.S.-Greece cooperation in the academic world. Right now, we’re working very closely with Minister of Education Nikki Kerameus, a graduate of a U.S. university, I’m glad to say. She’s really taking her ministry down this path of extroversion, and seeking to expand, using IIE, and seeking to expand the connections between U.S. and Greek universities. It has been slowed down a little bit by Covid, but we’ve still got a lot of exciting new partnerships getting started and definitely more to come.

And, of course, it’s an exciting time to be in Greece because it’s the bicentennial of Greek independence. I’ve had a really fun time in the last year learning a lot more about the really amazing connections between our revolution and yours. Our revolutionaries and founders were influenced by Greek philosophy and Greek democracy. And then, in turn, how Greek freedom fighters only a few short years after our revolution were inspired by us and our ability to make change. And, of course, learning all of the stories of the American Philhellenes who assisted Greece during the revolution. So, just a terrifically exciting time to be here.

I hope Marilena, there in Washington, you have an opportunity to also meet Alexandra Papadopoulou, who is an old friend and colleague from previous postings, and now Greece’s Ambassador to the United States, and a Fulbright alum. So they’re everywhere. I don’t know how easy it is with Covid and all of that for people to make it to Washington, besides Marilena, to have a chance to meet Ambassador Papadopoulou, but I hope you do have that opportunity.

Big kudos and hats off to all of you for braving the pandemic to go to the United States. Most of your compatriots deferred, which I completely understand, and again it was chiefly, I think, not their doing but maybe the host institution maybe not being quite ready to go. But I’m very encouraged to hear that it sounds like most of your host institutions in the United States have been able to receive you well and give you the access you need to research facilities and that life in the various towns you’ve ended up in has been a good experience for you. I’m really glad to hear that.

And then we have to acknowledge the human cost and the human toll that the pandemic has taken on all of us. So I really appreciate that you’ve managed to take the trip and so pleased to hear that one of you may soon be our first Greek Fulbrighter vaccinated in the United States. Hopefully we can get to all of you in your time there, but if not hopefully you can very soon once you get back here to Greece.

So Artemis, hats off always to Fulbright Greece and to Els. It’s a great partnership. And I look forward to learning more from our students and scholars about their experience in the U.S. What an amazing group. I’ve read all of your bios. And I just love the fact that there’s so much diversity in what you’re studying and where you’re from. And I hope you have a great experience in the United States. Thank you.