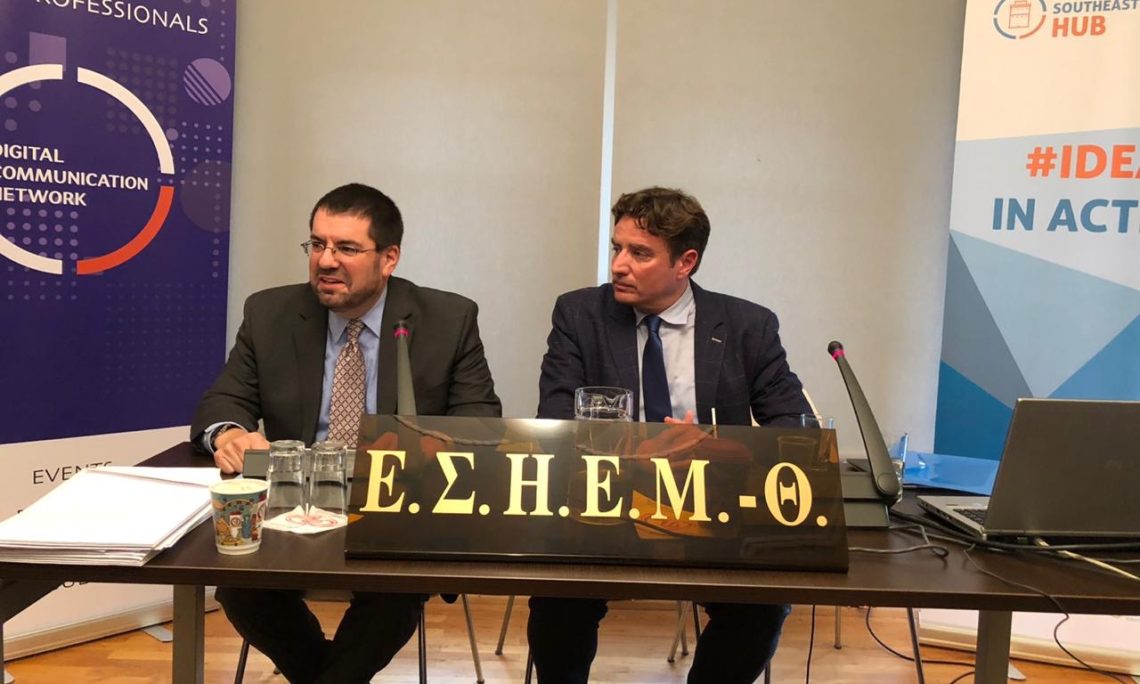 Καλησπέρα σας και χρόνια πολλά! I looked on my way over and saw that you were hunting for bots. I hope you had good luck finding them. [laughter] And I do want to thank Anna, Lukas and Roman for coming and providing this course.

We’re really pleased to partner with the Atlantic Council and its Digital Forensics Research Lab on this project. Let me also send greetings from Ambassador Pyatt. He was actually intending to be here today but unfortunately could not make the trip, so you’re stuck with me instead.

In an era of renewed great power competition in the Eastern Mediterranean, our Western democracies face an unprecedented attack from disinformation, which threatens to distort the open market of ideas by promoting lies and stoking hatred.

Using the multiplier effect of social media, our rivals attempt to use an essential feature of our democracies – the free and open flow of information – to destabilize us.

My government, including our mission in Greece, have been frequent targets of disinformation, whether it be false reports that my Embassy called for co-exploitation of hydrocarbons in the Aegean, or that we bribed Members of Parliament to vote for the Prespes Agreement and had secret meetings between Ambassador Pyatt and Prime Minister Zaev, or that we twisted the Ecumenical Patriarch’s arm to grant autocephaly to the Orthodox Church of Ukraine.

These ridiculous stories have the clear goal of attempting to disrupt our alliance with Greece by sowing doubt and discord.

One of the best defenses against disinformation is a free and transparent news media and an informed citizenry.

And that’s why the new DCN-SEE Hub and workshops like this are so important, and thank you again for your efforts.

The 2018 Thessaloniki International Fair saw the introduction of this concept of the DCN-SEE, and I’m very impressed by the fruits of that event one-and-a-half years later.

So I’d like to thank you, Nikos, for your consistent focus on these issues, and for addressing the grassroots need to expose fake news and build digital resilience.

It’s no surprise that Thessaloniki, an historic crossroads with leading universities, innovative human capital, and strong ties to its northern neighbors, has become the home of the Southeast Europe Hub.

With the support and expertise of its partners at Aristotle University, the Atlantic Council, Facebook, and others, the DCN-SEE Hub will combat disinformation, promote democratic values, and support innovative ideas and new technologies.

In an effort to promote digital resilience and empower the news media, Ambassador Pyatt helped to kick off a series of #DisinfoWeek conferences that the Atlantic Council organized throughout Europe last March.

Working closely with Nikos, with the U.S. Agency for Global Media, the Global Engagement Center, and the U.S. Embassy in Skopje, we also brought together journalists from Greece and North Macedonia for a workshop on fighting disinformation in Thessaloniki last June. And I understand we have a journalist from North Macedonia with us today. Welcome.

The workshop highlighted Thessaloniki’s importance as a center for intra-Balkan cooperation and affirmed Greece’s role as a pillar of stability that is helping to guide its northern neighbors towards Euro-Atlantic institutions.

Despite the challenges, I am certain that freedom of expression and freedom of speech will remain the bedrock of our democratic societies.  These are values that the U.S. and Greece share, values that bind our countries together.  And we will continue to work together to promote healthy and robust public debates based on facts, evidence, and reason.

I wish everyone a fantastic new year and hope you have a productive second day of your workshop tomorrow.  Ευχαριστώ πολύ.