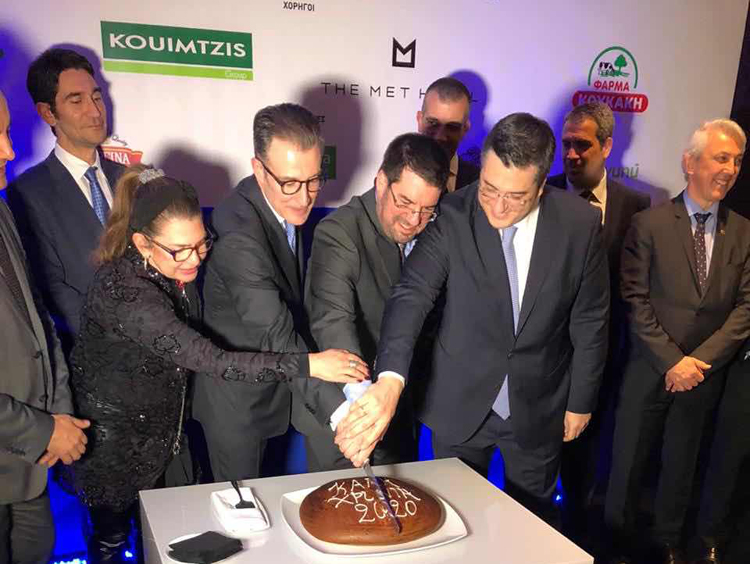 Καλησπέρα σας.  Χρόνια πολλά!  Deputy Minister Karaoglou, Governor Tzitzikostas, Vice Governor Patoulidou, General Koutras, honored guests, it’s always a pleasure to be back in Thessaloniki and to see so many friends from northern Greece gathered here this evening. Let me send greetings and apologies from Ambassador Pyatt, who unfortunately is not able to join us this evening.

I want to thank Nikolas, Vasilis, Elias, and the entire AmCham team, especially the northern Greece committee, for all the hard work they’ve invested in developing our trade and investment ties over the past year and for helping to advance northern Greece’s role as an energy hub and a gateway to the Balkans.

A lot has happened in our relationship with Greece in just the past few months.  During his engagements in Washington last month, Prime Minister Mitsotakis spread the word that Greece is open for business.

You probably saw the White House video clip of President Trump congratulating the Prime Minister on Greece’s tremendous comeback.  We saw that kind of positivity throughout the entire visit in Washington.  The Prime Minister’s visit highlighted the value proposition that the deepening U.S.-Greece alliance represents.

And nowhere is this more true than in northern Greece, where American engagement is more robust than ever, reflecting strategic priorities that the U.S. government has set from top to bottom.

It was a happy coincidence that Prime Minister Mitsotakis’ visit to Washington coincided with Prime Minister Borissov’s announcement that Bulgaria will become both an investor in and a guaranteed purchaser from the Alexandroupoli FSRU, following up discussions here in Thessaloniki last November.

Also last year, Greece completed its section of the Trans Adriatic Pipeline and began the initial stage of the pipeline commissioning process, with commercial gas flows scheduled to begin this year.

Together with the Greece-Bulgaria Interconnector, and Alexandroupoli FSRU, TAP demonstrates northern Greece’s growing role as an energy hub and guarantor of European energy security and diversification.

The US military’s successful removal of the sunken dredger from the port of Alexandroupoli improves the commercial value of the port and enables Greece and the United States to use Alexandroupoli as a strategic asset for the deployment of U.S. military and NATO forces into the Black Sea and Balkan regions.

There is significant American interest in the privatization of the northern Greece ports of Alexandroupoli and Kavala, and we hope this process will move quickly in the weeks ahead.

Our reinvigorated presence in northern Greece continues to pay dividends, and U.S. businesses share our optimism.  We will build on the investment announcements from Pfizer and Cisco.  We will encourage the success that American companies like Deloitte and Veltio have found here in Thessaloniki.

We are confident that the American footprint in northern Greece will continue to grow as U.S. companies seek to take advantage of the universities here, the strong human capital, and your links to your northern neighbors—something that Governor Tzitzikostas and Mayor Zervas talk about with great pride.

We commend the Greek government on its leadership in unlocking economic relationships in the western Balkans and in helping your northern neighbors advance towards Euro-Atlantic institutions.  These efforts affirm Greece’s role as a pillar of stability in the wider region and underline Thessaloniki’s value as the international gateway to a larger market of 30 million people.

So, I’d like to close with again a thank you to our hosts, Nikolas, Vasilis, and the AmCham, for all the work they’ve done over the year, and for the great strides we’ve made in our relationship with Northern Greece.

And I am confident that with the improving business environment in Greece, 2020 will be a year of major U.S. investment.  I wish everyone a fantastic new year.  Καλή χρονιά!