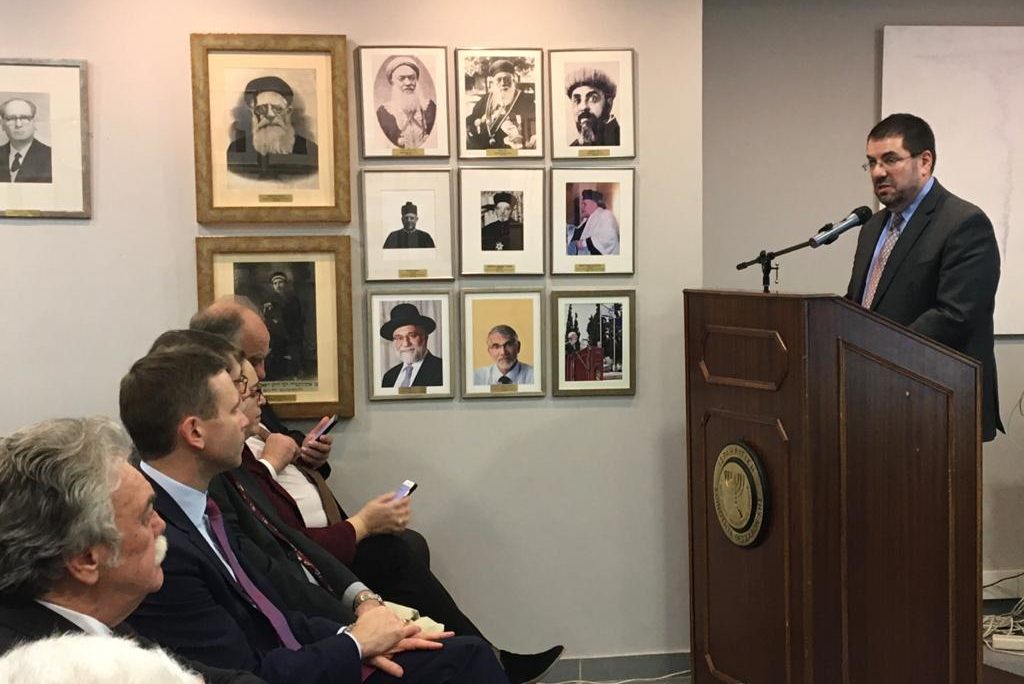 Καλησπέρα σας και καλή χρονιά! Good evening, President Saltiel, former Mayor Boutaris, dear guests and friends, I’m delighted to be back in Thessaloniki and, for the first time, to attend the 14th Annual David Tiano Lecture, organized by our Consulate in Thessaloniki to honor the memory of our former colleague. And I’d like to thank our good friend David Saltiel for again allowing us to hold the lecture in this beautiful facility. Let me send greetings and apologies from Ambassador Pyatt, who is unable to be here with you today.

I also want to recognize and honor the 11 Holocaust survivors still living in Thessaloniki, including Heinz Kounio, who gave our first Tiano Lecture. And I deeply appreciate that Mr. Kounio’s family is here and honoring us with their presence tonight.

Through the Tiano lecture, the Consulate General pays its respects to our colleague who was murdered by the Nazis in 1942, using his story to encourage dialogue and further education about the Holocaust and Thessaloniki’s important and once vibrant Jewish community.

Last week, on International Holocaust Remembrance Day, Ambassador Pyatt joined representatives from around the world in laying wreaths and paying our respects at memorials throughout Greece. That same day, Prime Minister Mitsotakis became the first Greek Prime Minister to visit Auschwitz in memory of all the Greek Jews who perished there. The Greek government’s clear statements of solidarity and remembrance were appreciated around the world. Greece lost more than 80 percent of its Jewish population during the Holocaust.

In November, Greece became the first country to adopt the International Holocaust Remembrance Alliance’s (IHRA) working definition of Holocaust denial and distortion, a move warmly welcomed by top Jewish groups in the United States. We hope that Greece will continue to be able to set an example for other countries when it takes over the rotating presidency of the IHRA in 2021, the same year that Greece celebrates its bicentennial.

I’m very proud of the work we’ve done at the Embassy to intensify cooperation between the U.S. Holocaust Memorial Museum and the Greek government as part of our U.S.-Greece Strategic Dialogue.

During Prime Minister Mitsotakis’s visit to Washington last month, Minister Panagiotopoulos signed an updated memorandum of understanding between the Greek Ministry of Defense and the U.S. Holocaust Museum. This agreement will allow researchers to examine records of Nazi atrocities in Greece between 1940 and 1945.

In addition to sharing archives, the United States and Greece will collaborate on a joint effort to retrieve personal items belonging to Jewish refugees from the 1946 Athina shipwreck off of Astypalaia for inclusion in the U.S. Holocaust Museum’s permanent exhibition.

The United States also commends Greece on approving 8 million euros last year to construct the Holocaust Museum here in Thessaloniki. When it is finished, it will be the only museum in the world that tells the story of the fate of the Sephardic Jews in the Holocaust. The museum will teach tolerance and diversity as part of its mandate, values that are more important now than ever, as David Saltiel just now mentioned.

The U.S. Embassy and the Consulate have both strongly supported Holocaust education in Greece. These important partnerships strengthen both our people-to-people ties and our shared commitment to religious freedom and tolerance.

This year, for our fourteenth annual Tiano lecture, graduate students Angeliki and Christos will present their efforts to record and map the names of Jewish high school students from Thessaloniki who perished during the Holocaust. This poignant project seeks to help keep the memory of these students alive. It also pays tribute to Thessaloniki’s storied past as the most important city of the Jewish diaspora for five centuries and a city that bore witness to the horrors of the Holocaust. I’m told that four schools in Thessaloniki have laid bronze plaques on their walls with the names of their lost students.

I’m greatly honored to be with you today for this annual lecture, to contribute in our small part to remembering and bearing witness to those whose lives were cut short by the Holocaust, and to ensure that these atrocities will never happen again. Ευχαριστώ πολύ.