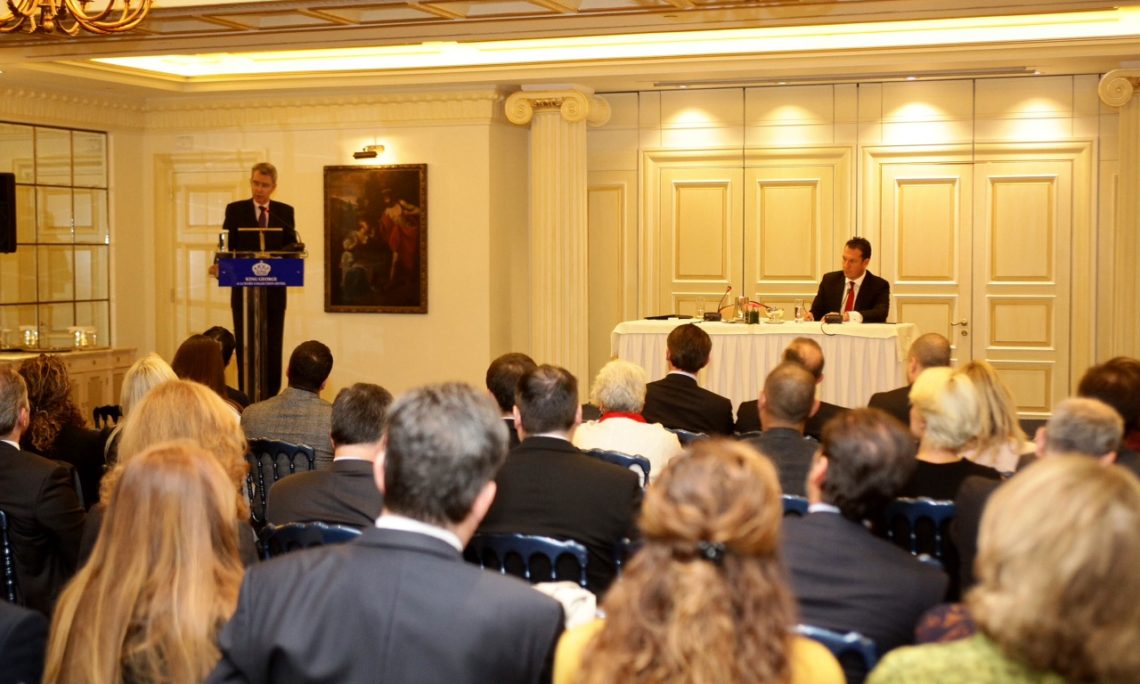 Thank you Dimitris and thank you to all of the Brown alumni who have turned out tonight to take part in this wonderful event.  I enjoyed getting to speak with several of you over drinks before the more formal part of tonight’s events, and I hope I have the opportunity to get to know more of you afterward.

I have had the opportunity to speak with several groups of alumni from American universities during my first year in Greece. You’re all fantastic advocates for strengthening the relations between our two countries and I am glad to have the opportunity to talk to you here tonight.  You understand the realities of both countries, and, as such, you are uniquely qualified to serve as cultural ambassadors between the two. And for me, there is no more important topic for all of you to be engaged on that the economic ties between our two nations. I wanted to briefly share what I see as the steps forward we’ve taken during my tenure here as Ambassador, what obstacles remain, and ways we can continue to progress.

As you’re all aware, I had the honor of accompanying Prime Minister Tsipras to Washington a few weeks ago, where he met with the President, Vice President, and other cabinet officials.  Economic development, investment, and trade were the top topics on the agenda and you need to look no further than President Trump’s commitment to send a high-level delegation to next year’s Thessaloniki International Fair, where the United States will be the honored country, to see how seriously America wants to strengthen business and investment ties with Greece.

In addition to meeting with President Trump, Vice President Pence, Secretary of Commerce Wilbur Ross and others in the Administration, Prime Minister Tsipras had a dialogue with representatives of American companies in Chicago and Washington about Greece’s economic recovery. He shared Greece’s affinity for the transparency and openness of U.S. businesses. U.S. companies are reliable partners bringing innovation and advanced technologies to Greece. They adhere to a high level of business standards and ethics that are not the usual among some international businesses seeking to invest in Greece’s economy.

American and Greek companies alike seek a favorable, predictable and stable business climate, and Greece’s legal and bureaucratic system should support these companies and potential investment. Businesses don’t mind paying taxes, as long as paying taxes affords them stability and an environment to grow.

The privatization and sale of public properties is an important step in the right direction.  Well-managed sales of properties such as Neorion shipyards, ELVO, the Hellenikon airport, and Alexandropoulis port will provide important opportunities for US investment and support of Greek entities.

To attract reliable and sustainable investment, there must be an expectation of transparency and full knowledge of all the partners in any business deal.  American companies are well known for their transparency, for their adherence to the Foreign Corrupt Practices Act, and for their respect for the rule of law in general.  I believe that’s a unique and important advantage of doing business with U.S. companies, one that’s not found with some of Greece’s other partners.

Importantly, our economic and commercial relationship is also not just deals in Greece or in the United States.  For instance, Mytilineos and General Electric just signed an EPC deal for a power plant in Libya that will help that country reduce power shortages and modernize a critical sector.  This illustrates how Greek and American companies together can drive growth and achieve commercial success in regions of strategic importance.

And we are certainly working more and more with Greece both on a regional and bilateral basis.  This December I will be coming back to the U.S. again, this time with Minister Papadimitriou, Minister Pappas, Minister Kountoura and many others for the Capital Link Forum in New York to get the word out on opportunities here to build trade and investment ties.

In June of next year, I’ll return to the U.S. with what I hope will be a record showing of Greek companies for the next SelectUSA conference.

I can also cite another Greek company, Pyramis, as a good example of what can happen at SelectUSA.  Pyramis produces more than 1.5 million stainless steel sinks per year and exports 98% of its products.  It is a top supplier for IKEA and for the U.S. market in particular. It has maintained quality and global competitiveness through investments of more than 17 million euros over the past decade in new technologies and automation.

The company is growing globally and is currently considering new investments in the U.S., having taken the opportunity of SelectUSA to begin a dialogue with several U.S. states for an additional U.S.-based manufacturing plant.

And, to conclude, I would like to reiterate just how excited I am that the United States has been selected as the honored country at next year’s Thessaloniki International Fair.  We intend to make the TIF, in September 2018, a cornerstone of our bilateral relationship, taking advantage of TIF’s status as the most significant regional trade event attracting attention and visitors from throughout Southeast Europe. The U.S. Commercial Service along with many other sections and agencies in our Embassy will once again work with the American – Hellenic Chamber of Commerce, this time to put together a spectacular American pavilion. The fair will highlight American business innovation, advanced manufacturing and technology, and I encourage all of you, as Greeks with strong ties to the United States and an interest in business and the economy, to get involved.

With that, I’ll conclude and I will be happy to take your questions and drive the remainder of the event toward topics you’re interested in.  Thank you.