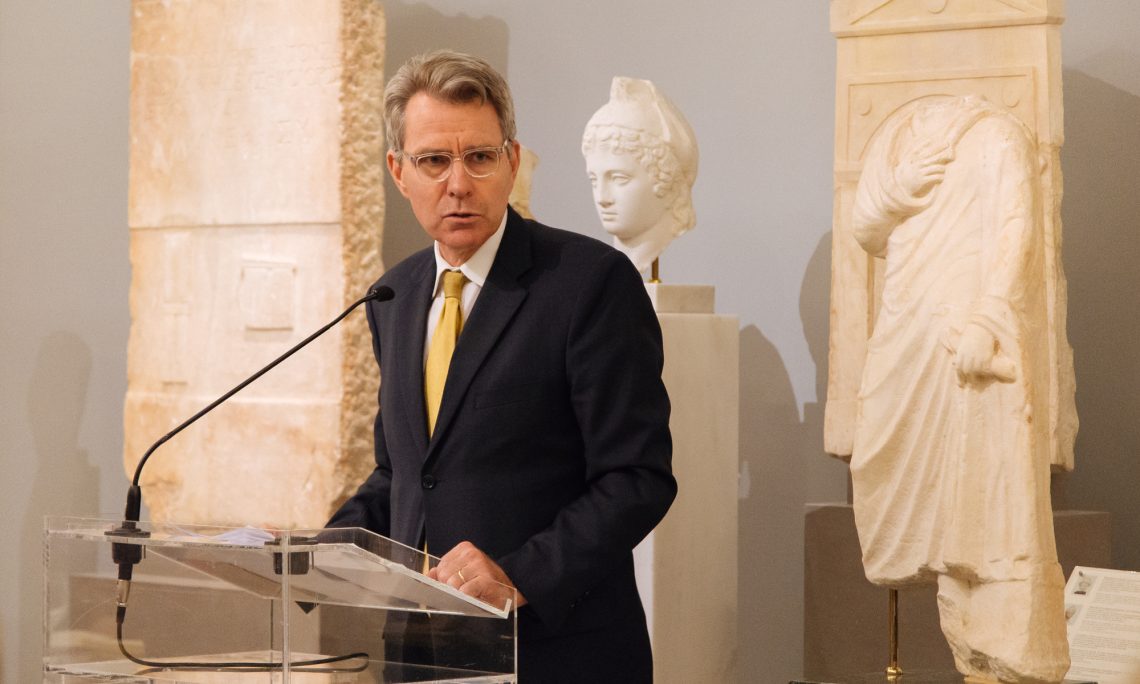 I had the opportunity when I was back in Washington in the summer to have a good discussion, that BCIU put together for me, with many of the companies that are represented here this evening – chaired by Ambassador John Negroponte who, among other things, aside from being one of the true giants of American diplomacy and former Consul General of Thessaloniki, is also one of the most senior Greek-Americans to have served here. So it was a real pleasure to do that.

I also, as I was listening to the introduction that Peter offered, I was reminded of, in addition, President Eisenhower’s foundational goal with BCIU. He of course is also one of those four American Presidents who have managed to come to Athens during the post-World War II period. I think his vision of bipartisan, international American engagement is one that certainly informs the President I work for and will be visible throughout President Obama’s coming visit.

The roundtable that I did with the BCIU team in Washington was a sobering reminder of the huge challenges that Greece has confronted, the challenges that they are overcoming, but also the great opportunities. I would not be in this profession if I was not a strong believer in the principle of ‘glass half full’ diplomacy and I see as one of my important missions, over the next three years: to ensure that the U.S. government is doing everything that we possibly can, capitalizing on those opportunities; to speak frankly to our allies and partners in the Greek government; and to identify opportunities for growing the business and people-to-people relations which are such an important part of what we do.

Symeon, of course, has also already pitched me on the Delphi Economic Forum and, as a true believer in the importance of ideas and principles, I very much look forward to the conversations in Delphi, using that as an opportunity to further develop my ideas about how the United States can work with Greeks of all stripes. Including the new generation of entrepreneurs, some of whom I had the opportunity already to engage with and have left me with a very profound sense that there is change happening in this country, that there is a generation of business and political leaders which is emerging, that have all the tools to succeed in this extremely competitive global economy and who merit the best support the United States can mobilize.

Of course, it’s a special pleasure, aside from marking the BCIU anniversary, to be at this event in the context of the global awards gala happening in New York in a couple of weeks when Andrew Liveris, who I have actually worked with in previous capacities, will be honored for his contributions to the American business community. I’m sorry I can’t be there in December but very much appreciate the opportunity this evening to offer my congratulations on that important recognition – which, again, goes to one of the distinguishing characteristics of our alliance which is this remarkable and enduring phenomenon of the Greek-American diaspora and people-to-people relationship which is the mark of our most successful, bilateral relationships around the world and one that I’m committed to continuing to invest in and supporting.

We are friends, we are strategic allies, and we are partners across a broad range of global issues. I think President Obama’s visit, exactly two weeks from now, demonstrates this powerful bond better than just about anything else that I could say here this evening. But I do want to offer a couple of personal views on where we are in the U.S. relationship with Greece, in part so that I can hear from you over the weeks ahead – get your advice, get your counsel, and get your support as I embark on what is, obviously, a particularly challenging diplomatic assignment.

I have, again, as Peter alluded to, had a particularly challenging three years behind me as Ambassador in Ukraine. But that experience also left me with a deeply personal appreciation for the importance of Europe. Europe as an institutional construct but also Europe as a community of values. Europe as the anchor of our transatlantic alliance. And Europe as an indispensable requirement for the kind of global engagement with what the United States has stood for and will continue to stand for regardless of who comes up on top of our coming presidential election.

But I also come to Athens now with the deeply felt conviction that success of that larger European project cannot be achieved unless Greece itself is successful. That is to say that what happens in Greece matters deeply to the United States, it matters to the wider Mediterranean region, and, certainly, to Europe. We cannot have a successful Europe unless there is a successful Greece. As partners and allies, the United States will continue to do everything it possibly can to help Greece as it recovers from the financial crisis. But we also want to work with all of you to help build the foundation for sustainable growth as the financial crisis is behind you.

That means further improvement in the investment and business climate here in Greece; it means removing obstacles to the expansion of companies that are already here; and promoting policies that will encourage the obvious capacity of Greek innovators and entrepreneurs who are already so successful and have demonstrated such a powerful record of success in my country as well.

From that perspective, I should say, I have been encouraged by my initial conversations with Prime Minister Tsipras and his most senior advisors who have placed great emphasis on their interest in attracting greater U.S. investment and have been open to American advice about how we can accomplish that goal. But it’s ultimately much less important what they say to me than what they say to you. So we want to work so that private companies get the support from the Greek government they need to succeed and grow. Partnership between public and private entities creates the type of opportunity that will transform Greece for the future.

During my tenure as Ambassador, my intent is to work as hard as I possibly can to make this vision a reality – to cultivate entrepreneurship and innovation and to expand the commercial ties between the United States and Greece. To build on what I believe to be the defining characteristic of the global economy in the 21st century which is new, transformative technology and the increasing connections between all of our markets and societies.

Bilateral trade between the United States and Greece is much smaller than it should be – it’s just under $2 billion in 2016 – but the U.S. investment position in this country has been declining due to challenges in the business environment. I want to change that. To show American business that there are opportunities for successful investment here and that the Greek government can be a good partner.

At the same time, it’s important to note how Greek companies have been increasingly successful in their business, in the U.S. market. I met with some of you this evening, hearing stories of your expanding contribution to U.S. job growth, to U.S. exports. At the Embassy, my team – and we’ve got several of us who are here tonight – are committed to working with you on both sides of that trade investment equation.

But, again, I want to come back to the question of technology and how we help Greek entrepreneurs. I’m very excited about the programs the Embassy has already been involved in – things like inviting young entrepreneurs to participate in the South by Southwest Festival in Austin; the work The Hellenic Initiative does, which is such a fantastic example of the power of our diaspora and the ability of Greek-Americans to give back to their country of origin – to help Greek small business owners, start-ups, and entrepreneurs who are necessarily the backbone of this economy and will be the drivers of economic recovery and growth.

Committed to continuing our strong partnership with the American-Hellenic Chamber of Commerce and I’m glad we’ve already got plans in place for a trade mission next year. Look forward to continuing to develop those opportunities. But my greatest hope, as I look to President Obama’s visit and the year ahead – 2017 which, if nothing else, will bring lots and lots of changes in Washington, D.C. – is that this period marks Greece’s turning point. A return to economic growth, new job opportunities for the people of Greece, and a sense of hope.

I have been here for about four weeks. But I have travelled a lot and I have already seen enough to convince me that that possibility is within reach. I was in Thessaloniki last week, enormously encouraged by what I heard from the Governor, from the Mayor, from the businesspeople and young people I met with who are helping to think about how to accomplish the transformation that sustainable growth in Greece requires.

The leaders in this room – and I am very grateful to BCIU for bringing all of you together – represent Greece’s best hope of emerging from the crisis strong and stable. I am excited to discuss these issues with you. I want to assure you that my door is open to all of you. And I want to promise you that you will have no stronger partner than the United States Government as you seek to build a successful, European, democratic Greece that is so important to my country. Thank you very much.