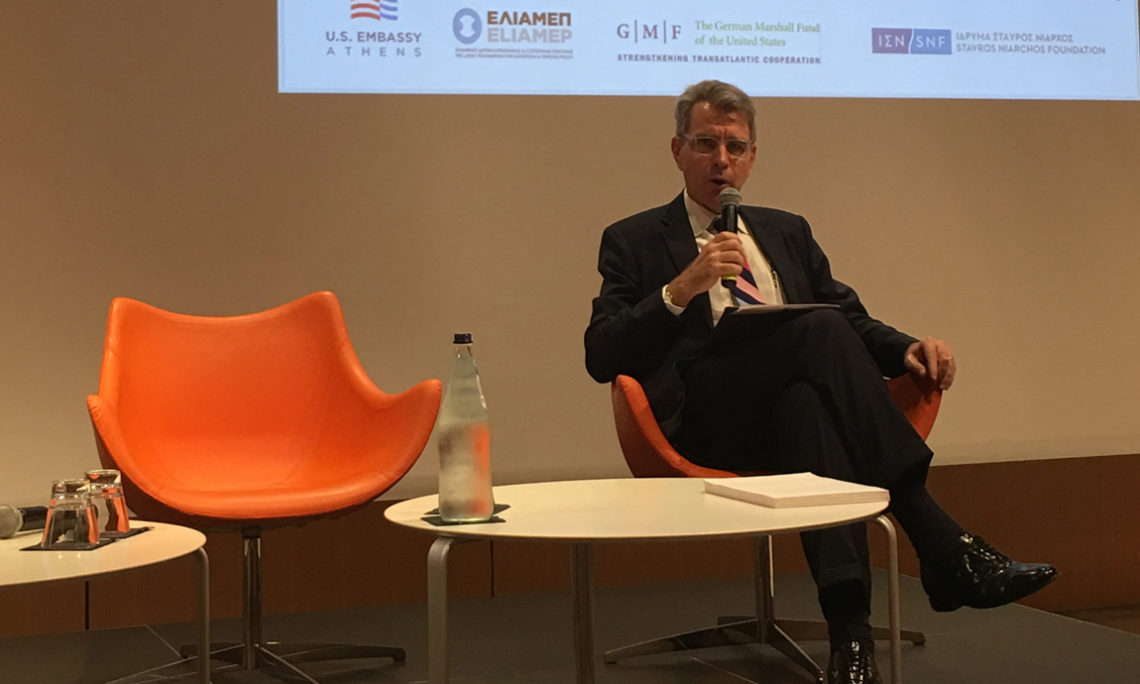 at the Conference “Athens Meets Detroit:

The Importance of Civic Engagement and Social Accountability”

Good afternoon.  It is a great pleasure to be with all of you today.  It’s always wonderful to be down in Piraeus at this iconic and buzzing landmark of Athens.  Special congratulations to Christina Manolopoulou and her German Marshall Fund partners for pulling this conference together. The German Marshall Fund is an important institutional partner.  They hosted my speech in Washington last June, so I am very grateful for this opportunity to collaborate.

The Stavros Niarchos Foundation Cultural Center is certainly the appropriate setting for a conference on civic engagement and social accountability.  Less than a year ago, then President delivered his keynote speech to the Greek people from this state-of-the-art facility.  During that event, he said that the most important title is “citizen,” a right and a responsibility that we all share individually and collectively.

The tradition of civic engagement in the U.S. is long and deep.  Active citizenship and social accountability have been cornerstones of our democracy and important elements of development and social cohesion in our country.   And this is a tradition we share with Greece – as the eight year crisis has shown.

The U.S. Embassy in Athens has had the pleasure to collaborate with some excellent organizations that exemplify what civic engagement means.  Organizations like Boroume, PRAKSIS, Melissa, Impact Hub, HIGGS, and others, rely on the ingenuity and enthusiasm of active citizens and community volunteers to advance their goals.

And of course, the Stavros Niarchos Foundation, which has changed the landscape for nonprofit organizations and for volunteerism and active citizenship in Greece in the last ten years.  I can’t let this moment pass without acknowledging the Foundation’s tremendous donation of $55 million to the New York Public Library, announced earlier this month.

Aside from the hundreds of millions of euros in donations to address the effects of the economic crisis, the Stavros Niarchos Foundation has empowered public and private institutions to develop their civic engagement and social accountability strategies.  The Cultural Center and the wonderful National Library that hosts today’s event is the epitome of what civic engagement means and probably the best practice in Greece in public-private partnerships.

The difficult times that Greece has faced have also created opportunities to accomplish great things.

In the past year serving as U.S. Ambassador to Greece, I have been so impressed by the volunteers and volunteer groups and, also, by their strength and determination to join forces and help the needy in any way they can.

What is even more impressive is that most of these groups are driven by young people.  I think we can all agree that empowering our youth to volunteer and become active citizens in their communities ensures the vibrancy of our democracies.

Detroit went through economic hardship similar to Greece, and also relied on its youth and active citizens to recharge its economy, to support new initiatives in entrepreneurship, urban development, design and the creative industries.  Last year, the Embassy supported two exchanges between Athens and Detroit – we sent two Greek professionals to the IdeasCity Conference in Detroit in collaboration with the New Museum in New York, to work with their international counterparts in finding creative solutions to the urban and economic problems of the two cities.

We also supported a conference on empowering the creative industries and brought over Melvin Henley of the Detroit Creative Corridor Center to share best practices in turning Detroit into a design hub, and creating economic growth.

That’s why I am particularly pleased to welcome here today several representatives of the city of Detroit, from both the public and the private sectors, to continue the exchange between the two cities and countries.  I am very impressed by the energy, vision, and relevance to Greece.

Finally, I would like to thank the German Marshall Fund for supporting today’s conference.  70 years ago, Secretary Marshall delivered a commencement address at Harvard University that would change the course of European history.  This really was the beginning of the United States’ modern transatlantic alliance with Greece and our other European partners.

U.S. support to Greece, through the Marshall Plan and other post-War programs, amounted to about two billion U.S. dollars – which would be worth more than 21 billion dollars today.  The Marshall Plan touched every aspect of Greek recovery after World War II – in too many ways to fully describe here this afternoon.

This is another reason I am excited to be here, among some of the Greek Fellows of the German Marshall Fund – several alumni of the great exchange opportunities the Fund offers.

I would like to wish you all great success in the conference, I look forward to seeing the results, and thank you again for being here.