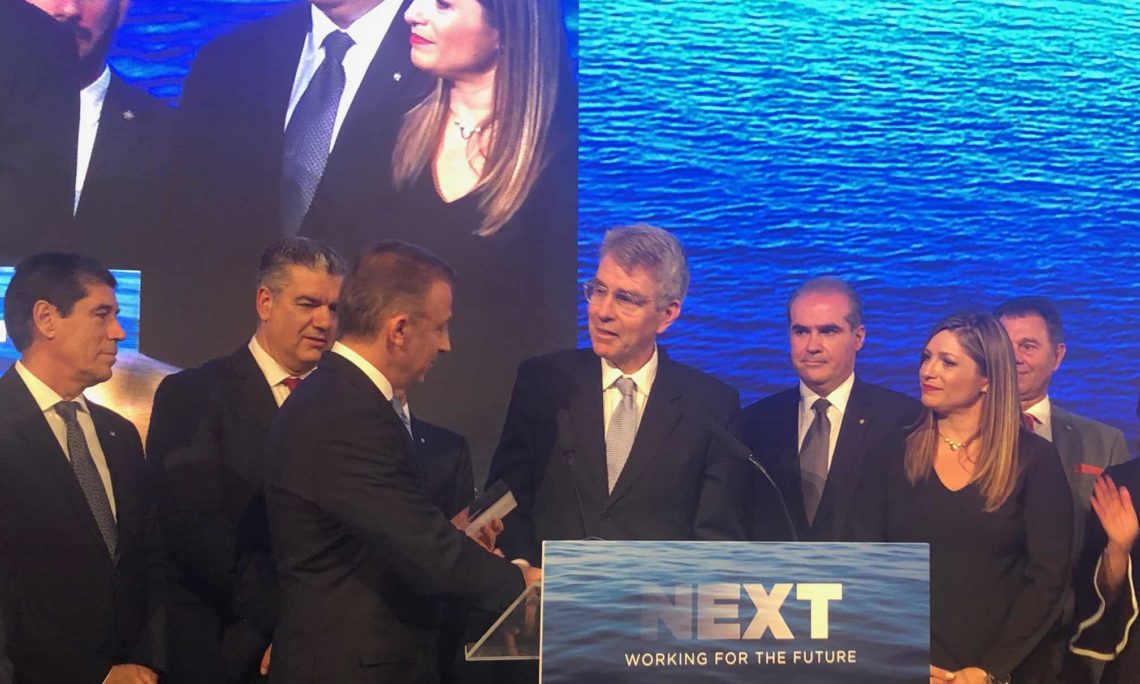 Καλησπέρα σας. Thank you to Costis, the Propeller Club and to the kids from ACS. Weren’t they fantastic?

Commandant Kliaris, Admiral Tsounis, friends, colleagues, thank you so much for inviting me back to address this year’s AMVER awards ceremony.  Mary was reminding me as we were walking in this evening that this is our fourth ceremony. I didn’t think this was going to happen, but here we are. And I want to say what a great honor it is to be able to participate in such an amazing program and to showcase the fantastically important role that the Greek shipping plays in the relationship between the United States and Greece.

The U.S. Coast Guard is also a key part of that relationship, and I really appreciate the fact that Rear Admiral Timme came all the way to Athens from Washington, DC to be part of tonight’s ceremony.

I also want to start off by thanking my dear friend George Xiradakis for his service as President of the Propeller Club over the past few years. George really took it to a whole new level, and we’re very excited for his new position as Vice President of the International Propeller Club.  And, of course, I am very much looking forward to working with Costis Frangoulis, whose leadership

and focus on the Propeller Club’s core values will be such a great asset.

I also want to say what a real pleasure it is to have here this evening Vice Admiral Kliaris in his new role as Commandant of the Hellenic Coast Guard.

The Greek Coast Guard does truly heroic work: for instance, just this week the Coast Guard rescued 112 migrants and refugees. The Hellenic Coast Guard is also a critical partner in our law enforcement and security relationship, and I very much look forward to working closely with the new commandant to further strengthen our collaboration and to build new initiatives between our two countries.

AMVER has saved thousands of lives, and while it began as a U.S. Coast Guard initiative, the favorable response from the merchant
shipping industry around the world is what has made it a global success.

I also want to recognize the entire Greek shipping community that’s here this evening. Mary and I have really enjoyed getting to know so many of you over the past three years — I’ve also learned to keep the remarks short so if you give me your attention I’ll get to the end here — and I recognize that your participation in AMVER is just one facet of Greek shipping’s longstanding and deep ties to the United States, so thank you.

Earlier this week, Captain Ketter and I were in Naples, meeting with Admiral Foggo, 6th Fleet Commander Admiral Franchetti, and all the other NAVEUR elements to talk about how to deepen our naval ties, building on our newly expanded Mutual Defense Cooperation Agreement.

One good example of that cooperation is the U.S. Army-funded project that removed the sunken dredger “Olga” from the Port of Alexandroupoli.
And we look forward to the upcoming privatization of that port and are optimistic that the conditions will be right for an American investor to participate.

And we are making systematic efforts to increase ties with Greece in the maritime sector. In August, just a little while after the elections, I sat down with Minister for Maritime Affairs Plakiotakis to discuss the many opportunities for U.S. investors in the Greek shipping industry, ports, and shipyards. We’re very excited about what Neorion is doing in Syros, and look forward as well to seeing that success replicated on a much larger scale in Elefsina.

So, in honor of all those who have saved lives through the AMVER program, in honor of our partners in the Hellenic Coast Guard, and in honor of the Propeller Club’s many past contributions to the U.S.-Greece relationship, I’ll raise a glass as soon as I get to my table and thank you for being such terrific partners. Ευχαριστώ.