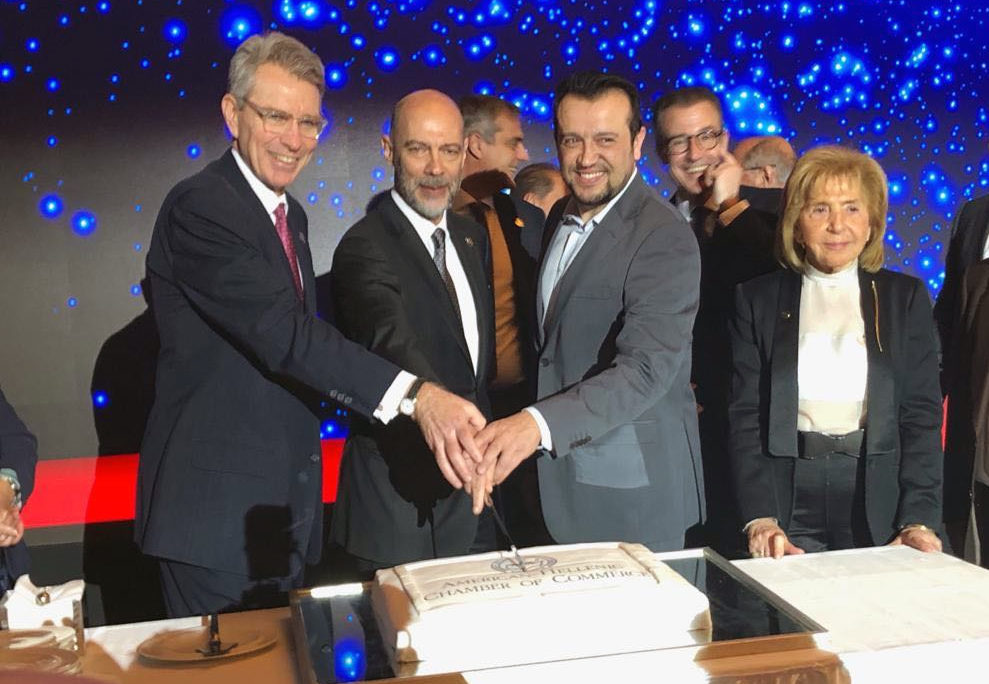 Καλησπέρα σας, χρόνια πολλά! I know everyone is excited about the pita cutting and the search for the “flouri,” so I am going to make this very short.

But I need to take a moment at the beginning to thank Simos, Elias, Litsa and the whole AmCham team, as well as the Embassy team that’s with me here this evening, and, of course, Minister Pappas and all of his team from the Digital Policy Ministry for the fantastic cooperation that we’ve enjoyed over the past year, and especially for the Thessaloniki International Fair.  We took our role as honored country at the Thessaloniki Fair quite seriously, and I’m enormously proud of how we made 2018 the year of America in Greece.

My philosophy for TIF was based on a line from that movie, “if you build it, they will come.” And last year was about continuing to build on the foundations of American investment interest in Greece in support of Greece’s full economic recovery. Today, those foundations are as strong as they’ve ever been — and I’d add, as the direct result of a lot of the people in the room here tonight.

A couple of recent highlights include the first ever shipment of American Liquified Natural Gas not only to Greece, but to the entire Balkan region, with a second shipment due in February. U.S. company ONEX has not only brought back to life Syros’ Neorion Shipyards and given the island’s residents the opportunity for employment, but ONEX just conducted the first-ever repair of a submerged dry dock.  We are also seeing now significant new interest here from American renewable energy companies.

And of course, the potential American investment in the Hellenikon project holds the promise of transforming the tourism economy here in Greece and Athens.

In 2019, while we’re going to continue to work on American investor interest, we look to Greece to build the rest of the structure by continuing to move forward with transparent privatizations, fast-track reforms, and predictable regulations. These are the foundations that will make U.S. investors come to Greece in larger numbers.

Aside from Hellenikon, I am confident that we will have significant American interest in other big ticket projects, including the privatization of the Alexandroupoli port and the FSRU project there, as well as growing opportunities across the energy sector.

Next week, I will be in Thessaloniki, discussing all of these opportunities and also additional possibilities reflecting the role of Greece, and in particular the role of northern Greece, as an energy hub, as an exporter of security and stability and a gateway to the wider Balkan region, all of which we see unlocked by the recent Prespes Agreement.

I also want to commit here tonight to continued American engagement with Greece’s startup sector, and I’m very pleased to see so many representatives of that community here this evening. We’re working with Minister Pappas and his team to seize opportunities and follow up on their success at TIF and with the Digital Greece Startup Pavilion, and we’re thrilled that the Ministry is going to join the Embassy and The Hellenic Initiative in supporting Greece’s delegation of startups this year to the South by Southwest Festival in Texas.

And in just a couple of weeks, we are going to start a series of events on the road to the  Global Entrepreneurship Summit in the Netherlands this June.

Along with my great Dutch counterpart Ambassador Veldenkemp, we’ll be hosting a program at the Orange Grove incubator in support of agriculture and food entrepreneurship, one of the main themes of the Global Entrepreneurship Summit, which you’ll hear a lot more about from the White House and President Trump.

Propelled by the very successful U.S.-Greece Strategic Dialogue in Washington last month, 2019 has already started as a very positive year in the U.S.-Greece relationship, and my team and I look forward to working with AmCham and all of its member companies to help set the stage for even more success. As we push forward on our agenda with AmCham, we will continue to work with the government to look for ways to accelerate reforms and to continue our support for expanded economic growth in Greece.

So, let me close with a quick toast to our hosts, Simos and the AmCham, for all the work they’ve done over the year, for the miracle of Thessaloniki that they all helped to pull off, and let me share my hope that 2019 will be a year of major U.S. investment in Greece. I wish everyone a wonderful and profitable new year. Καλή χρονιά!