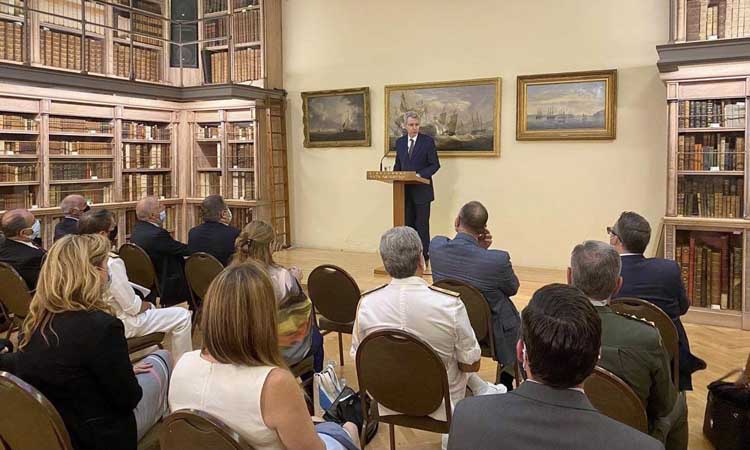 Thank you very much Dean Skafianakis.  Let me start by saying what a real pleasure it is to be back here in the Laskaridis Foundation library.  This is a beautiful setting, and we’re all very honored and very happy to be meeting again in real life.  Let me also say, Vice Director Hondrokoukis, colleagues, friends, what a huge pleasure it is for me to be here, and what a genuinely exciting day it is for us at the U.S. Embassy.

The launch of the new Master’s Program in American Studies at Pireaus University is the first of its kind in all of Greece, and we recognize this as a truly historic step in our bilateral relationship.

It takes a concerted effort to get a program like this off the ground, so I want to start by thanking our friend Professor Aris Tziampiris, also the University of Piraeus, the Council for International Relations-Greece, all of the team that has come together to make this program a reality.

I also want to thank the many partners, supporters, and sponsors of the new Master’s Program, including the Hellenic Ministry of Education, the Ministry of Defense, and the Center for Global Affairs at New York University, without whom this great step forward would not be possible.

The American Studies program will build on all the great work we’ve been doing with the Greek government over the past few years to expand and deepen our strategic relationship.  And I’m so glad that Professor Yannakogeorgos has come all the way to Athens from New York City to represent NYU.  I’m also delighted that more representatives from NYU are planning to visit Greece in the coming months as part of this collaboration.

The U.S. Embassy is very proud to be funding four scholarships for the first year of the Master’s program as part of our year-long campaign to celebrate the Greek bicentennial.  And I think it’s very fitting that the launch of this American Studies program is coming as part of the Greek bicentennial because it underscores the importance of our people-to-people ties, which in many ways are the heart of our alliance.

The strong, democratic values-based friendship between our two peoples goes back to the very foundation of our modern nations.  There is an indelible tie between the Greek Revolution and the American Revolution.  Just as America’s founders were inspired by ancient Athenian democracy, so too did the success of the American Revolution—against all odds—inspire Greek freedom fighters 45 years later.

Though America was a very young country in 1821, American philhellenes rallied to support the Greek cause because they saw the Greek revolutionaries as direct descendants of Socrates and Pericles, thinkers who inspired our own founders.    They believed that if the democratic experiment in the United States was to be successful, we had to also support the first liberal revolution in Europe inspired by America’s success.

The U.S. Embassy is committed to deepening that centuries’ old connection based on mutual understanding, respect, and friendship between our peoples.  That’s why we’ve been so supportive of the dramatic reforms that Minister of Education Kerameus and her team are implementing, with a major focus on developing relations between Greek universities and counterparts in the United States.

We are eager to continue to build even stronger institutional ties between universities in Greece and the United States, working closely together with the Greek government, Minister Kerameus and her outstanding team.

And that’s why we’re so excited about the new partnership we’ve formed with Aris and with the Greek CFIR to launch this American Studies Program at the University of Piraeus.

As Greece assumes increasing leadership in a challenging international environment, this new Master’s program will offer a forum for Americans and Greeks to exchange views on U.S. policy, strategy, history, and culture.  It will encourage increased linkages between Greek and American universities, students, and academics, and help both of us to think more strategically about this dynamic region that stretches from the Eastern Mediterranean up to the Western Balkans, the Black Sea and beyond.

I am confident that this program will act as a beacon, attracting American Studies interest from all around Greece and the wider region.  It will also reaffirm the values that our peoples hold in common: our passion for democracy, equality, human liberty, and self-government, but also our shared spirit of innovation, creativity, and entrepreneurship.

I very much look forward to meeting the first class of Master’s students who will be accepted into the program this fall.  But this is only the beginning.  The Embassy will continue strongly to support this program by providing U.S. speakers and experts, educational exchanges, co-sponsored conferences, scholarships, and other activities.

The Embassy’s scholarships will offer significant opportunities to talented Greek young people.  I am confident that this investment which we are making in Greece’s youth will further strengthen the bonds between our two countries, helping us to continue to reach greater heights advancing and realizing the promise of our historic friendship.