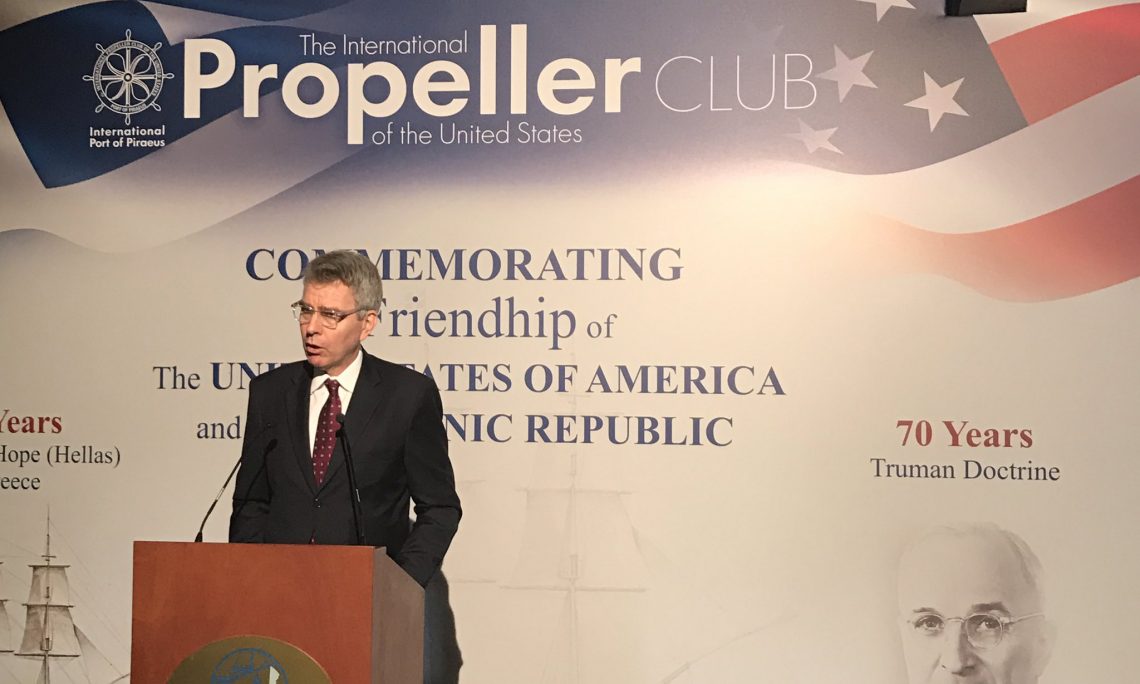 Καλημέρα!  Good afternoon everybody. First of all, thank you Senator Raptakis for those remarks.  My fellow American, also State Assembly Woman Maliotakis from New York State Assembly.  I want to begin by acknowledging the really gracious remarks from our ally Minister of Defense Kammenos.  Minister, you have been a strong champion of our alliance and our work together.  I know there are even better things ahead.  But I really do want, on behalf of my government, to acknowledge our appreciation for the partnership that you have pursued, but also your very generous remarks today about the history of our relationship.

I particularly want to acknowledge my friend George, who put together today’s event – you have been a guide and a friend throughout my time here in Greece.  But I really want to commend your initiative in putting together today’s event to mark a series of really historic anniversaries and to remind us of the important foundation that those events those who are working on the U.S. Greek relationship today are building upon.  I’m very honored to do so today with so many important partners from the Greek government in presence, Minister Kouroublis of course, and a number of senior military leaders.  Starting of course with Admiral Apostolakis – sir, thank you for your extraordinary partnership.  Also the Commandant of the Hellenic Coast Guard, who we have worked with so closely through the years, and many, many other senior officials of the Greek military and of the Parliament and Government.

They say that Greeks have seawater in their blood, and that’s certainly true of Greek ship owners, who are some of the world’s savviest business people.  Today, we are really celebrating two anniversaries and two key moments that have defined the history of our great countries.  One of course, and in my mind the most important, is the 70th anniversary of the Truman Doctrine and the Marshall Plan.  It’s important, I think, at a moment when we in America are having a debate about the future of our foreign affairs to remember the world as it existed in 1947.  Europe was on the brink of collapse after the devastation of the Second World War.

It was a decision by our President then, President Truman, to step in and to assist the people of Europe at a critical moment and with the foresight to know that our transatlantic partnerships would become, in many ways, the most enduring and important relationships that we have in the world.  As the Truman Doctrine was ushered in and the Marshall Plan was implemented, we began an enormous project of assistance to jumpstart Europe’s recovery. Greece received massive amounts of military, economic, and diplomatic assistance which helped citizens to get back on their feet after the devastation of war and, most importantly, secured Greece’s place in the West.

A notable part of that legacy, of the Marshall Plan, of course, directly affected the Greek shipping industry.  We’ve already heard about how U.S. Liberty ships, like the one we’re on today, helped to replace many of those that Greece lost during the war and revitalized the Greek shipping industry so that it could roar back to the central place in the economy that it occupied in the 1950’s and 1960’s.  It’s worth remembering overall post-war U.S. support to Greece through the Marshall Plan and other programs amounted to about two billion U.S. dollars which, in today’s money, is more than 21 billion dollars of assistance, without memorandums and strings attached.

History has proven that this was one of our wisest foreign assistance investments. We are very, very proud to have supported Europe at its time of need and, to me, this stands as a reminder of the importance of standing with our allies and friends. To this day, we continue to defend each other.  At the Embassy here in Athens we are planning many programs through the spring and summer to mark the anniversary of the Marshall Plan including an American Studies Seminar that we will jointly organize with Panteion University and Deree in May to keep this history alive for younger generations.

Of course, we are also celebrating today, the anniversary of a great ship, the Hellas, and its 190th anniversary.  The Hellas, then called The Hope, sailed from New York in 1826 and quickly became the flagship of the Hellenic Navy.  Today, we are on another great vessel.  It is truly an honor to be welcomed here on my first, but surely not my last visit to the Hellas Liberty.  I want to really commend the Captain and those who showed us around on arrival on the extraordinary work of restoration and maintenance that’s been done on this living museum. I am so, so impressed by what I’ve seen today, and I really want to commend the remarks, the video, Leonidas, your remarks about the importance of remembering what this ship represents.

Today’s anniversary allows us to reflect on our past, but, also, to plan for the future.  United States military cooperation with Greece, bilaterally and within our NATO alliance, is an essential stabilizing factor in a complicated and strategically important region.  At NATO headquarters last week, Defense Secretary Mattis emphasized the importance of meeting our defense commitments to accomplish and to meet shared threats.  Secretary Mattis expressed appreciation for countries, like Greece, who, despite domestic challenges, are meeting their defense spending targets.  He noted that nations already committing two percent of GDP for defense, and the commitments other allies have made to commit the two percent, give him “confidence that nothing can shake our unity and our commitment to defend our way of life.”

Also this weekend, at the Munich Security Conference, Vice President Pence was able to reaffirm very clearly the United States’ commitment to our NATO allies.  Our Vice President said that the United States strongly supports NATO and will be unwavering in our commitment to the transatlantic alliance.  He emphasized that “the fates of the United States and Europe are intertwined; that your struggles are our struggles, and that your success is our success.  And ultimately, we will walk into the future together.”  He summarized: we stand with Europe “today and every day, because we are bound together by the same noble ideals: freedom, democracy, justice, and the rule of law.”

The Vice President also took the opportunity to commend countries like Greece for fulfilling their spending obligations.  The fact that Greece has been a stalwart NATO supporter, even through challenging times like these, speaks volumes about this country’s strong commitment to its allies.  We need our allies today as much as ever to face new and emerging threats.  It’s clear that NATO’s mission remains important and must be preserved.

For my part, I am committed to maintaining and further strengthening the military and security alliance between the United States and Greece.  Tomorrow, I will head up to Thessaloniki to welcome my good friend, the Commander of the U.S. Army Forces in Europe, Lt. General Ben Hodges.  Together, we will meet with the new Chief of the Hellenic Army, General Stefanis, to discuss bilateral security matters and the work ahead.  But, more importantly, this visit is an opportunity to appreciate first hand our concrete bilateral cooperation in Northern Greece.

We are committed to supporting our Greek partners and are grateful as ever for their continued support.  You will continue to find a strong ally and no better friend than the United States.  Thank you very much.