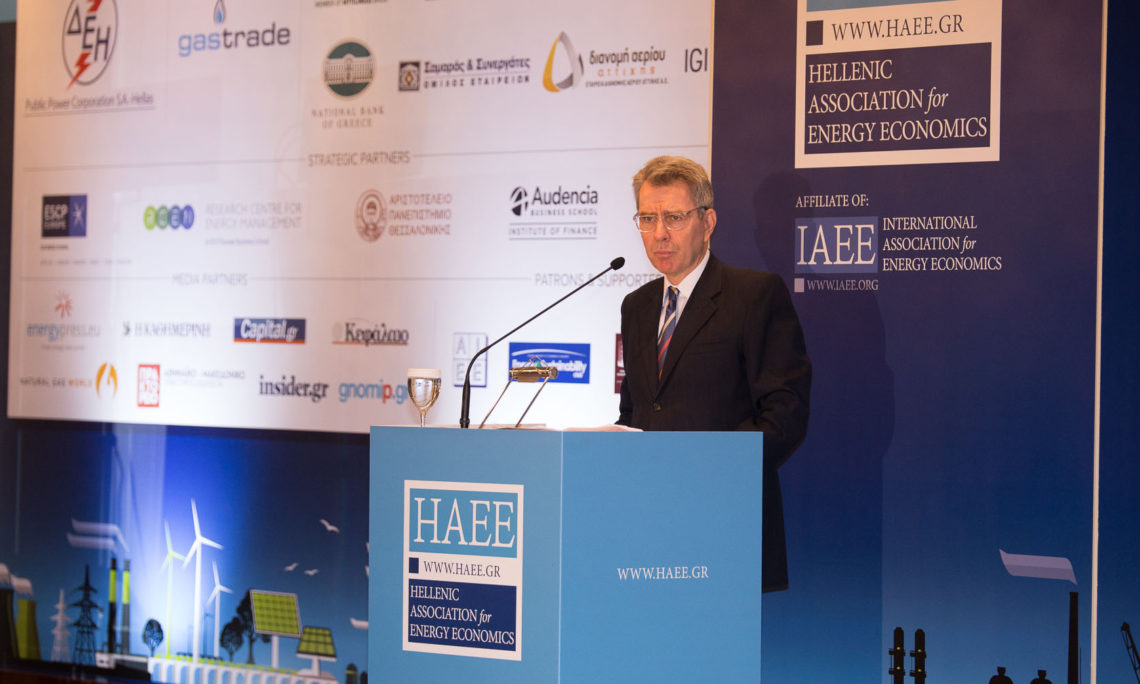 Good morning ladies and gentlemen. I would like to thank the Hellenic Association for Energy Economics and Kostas Andriosopoulos for inviting me to speak today on Greece’s energy sector, a critically important component of the Greek economy. I’m honored to be here with Minister Stathakis, former Minister Maniatis, and Mr. Skrekas.  I think we all benefitted from your experience and the insights you shared here this morning.

For years, Greece’s economic crisis has dominated headlines around the world, creating the narrative that the situation is hopeless.  This is a misperception.  Since I arrived in Greece, it’s been clear to me that the situation on the ground is very different from what often appears in the news.  Greeks have persevered through enormous challenges, through historic and unprecedented economic and social dislocation.

As American Ambassador, I have had the opportunity to meet with amazing Greeks – of all ages – who are moving forward, building businesses, and innovating.  I’ve traveled to Trikala, where I saw young Greeks using technology to innovate old industries – for example, I visited the Tyras dairy facility with its cutting edge production line that now exports products to the United States.  Across the length and breadth of this country, from Thessaloniki to Heraklion, I have seen Greek entrepreneurs working with cutting-edge technology to develop new products and new markets.

I’ve also met with leaders of much larger companies, including some American businesses, who continue to invest here in Greece – some of them investing hundreds of millions of dollars with even more, potentially, on the way.  For example, the Chicago-based company, Calamos, is leading a group bid on Ethniki Insurance.  If Calamos is selected, it will inject hundreds of millions of dollars into the Greek economy, and will attract additional investment from the United States and other free-market countries across a broad range of industry sectors.  This type of American investment creates jobs in Greece and will help the Greek economy grow.

Unfortunately, we all know that these successes are not universal in Greece today.  There are many, many businesses that have suffered through years of economic decline.  But I am hopeful that Greece is entering a new phase, where it has the opportunity to emerge from crisis and build a new narrative. A narrative centered on opportunity. One that highlights the reform commitments Greece has already implemented, and the reforms to come, which will improve the Greek business and investment climate for all companies.

That’s why I’m travelling to New York and Washington in June with Economy Minister Papadimitriou.  This trip is an opportunity for me to highlight the opportunities I see for expanded U.S. trade and investment ties with Greece and to share the confidence I have in Greece’s future.  We also want to underline the United States’ support for Greece and the Greek people – to end the cycle of economic crisis.

But, of course, it is up to the Greek government to capitalize on this moment of opportunity. They must create the conditions necessary for success.  If the government wants to change the narrative, they must take real, concrete steps and make changes to show investors that Greece is a good place to do business.  This includes moving forward on key privatizations that have been outstanding for a long time.  While some privatizations have moved forward, delivering billions to Greece, other large projects remain undone.

And the energy sector is one of the most significant areas where outside investment could create jobs and economic opportunity.  Energy privatizations will inject much-needed investment and know-how into the energy companies that form the backbone of the Greek economy.  Private sector projects, like TAP, are also critically important.  TAP is the final link in the Southern Gas corridor and a key part of Southeast Europe’s energy security.  It’s also an important part of building the positive narrative, showing the world that Greece is a place where large, international investment projects can succeed.  It’s been very impressive for me to see the strong political support for TAP, across the government, and especially when I travel in Northern Greece.  Everybody there is focused on the positive – on the job creation that TAP represents and on the potential to do even more.

And energy investment is not limited to the natural gas market.  Greece has been a leader in building renewable energy sources, developing expertise in the field that has allowed Greek companies to succeed around the world – including in the United States where TERNA, a Greek company, has built wind farms.  GE Energy has also expressed its confidence in the expanding Greek and European wind market.  GE Power is leading the power generation market in Greece with more than a 90% share in the natural gas generation installed base and a significant share of steam generation and environmental emission controls systems.  I’m looking forward in June to an event celebrating GE’s important role in regional wind energy.  GE Wind + Hydro is the world leader, but did not have a presence in Greece until late 2016, when GE won its first wind contract in Greece to pursue opportunities in the Greek renewables market, in excess of two gigawatts.

Other energy projects also have the potential to bring in billions of dollars in direct foreign investment and create thousands of jobs on both sides of the Atlantic.  Progress on these energy projects and opportunities will build and cement Greece’s central role in the regional energy sector.  I’ve spoken several times already about the key role Greece has to play in achieving energy security for Europe.

The United States has an enduring interest in supporting the energy security and energy diversification of Europe.  This has been the consistent policy of the United States for many years.  U.S. Secretary of Energy Rick Perry recently confirmed that, “the United States is committed to ensuring universal access to affordable and reliable energy to promote economic growth and energy security.”  I spent three years as the U.S. Ambassador to Ukraine where I saw, firsthand, the essential role of energy security in safeguarding Europe against outsiders who would use energy as a weapon.

The energy projects currently underway in Greece – like TAP, the Greece-Bulgaria Interconnector, and the expansion of Revithoussa – will bring significant quantities of non-Russian gas to Greece, Italy, Bulgaria, and other regional partners.  While the volumes involved are not enough to satisfy European gas demand, the introduction of new pipeline gas improves the market dynamic, encouraging competition, which will benefit everyone.

Other proposed projects also have potential to further improve the European energy equation and relax the stranglehold that one supplier has had on much of Europe’s energy market, especially in the Balkans.  An East-Med pipeline, the proposed floating storage and regasification unit near Alexandroupolis, and the development of a vertical corridor from Greece to Ukraine would help bring new sources of natural gas to Greece and to the rest of Europe.

To be clear, these projects are not intended to supplant the need for Russian gas.  Gazprom has been and will continue to be an important supplier of energy to Europe.  But these projects change the equation and help create a situation where Russia cannot use energy as a weapon or force countries to bend to its political will.  The position of the United States Government on these issues is clear – we are committed, as ever, to European energy security and supporting the goals of the Energy Union.  Projects, such as Nordstream II, run counter to these goals, as it could undermine European energy security.

To enhance this energy security, we hope the European Commission will apply the Third Energy Package, and other relevant laws and regulations consistent, to all aspects of the Nordstream II project – including both onshore and offshore sections.  We are committed to working with our allies to enhance European energy security, backing projects that diversify sources of energy.  Our opposition to Nordstream II is clear.  I also worry that projects here in Greece like the onshore portion of ITGI Poseidon, could exacerbate reliance on Russian gas, ultimately working against the interests of Greece and our other European allies.

We all benefit from a diversity of energy sources in Europe.  But, as former Minister Moniatis said, the markets decide.

Europe is increasingly benefitting from a thriving energy market with healthy competition – the private sector benefits from additional liquidity and more transparent pricing, and the United States benefits when our allies grow their economies and reinforce stability in this critically important region.

Moving forward, there’s real potential for Greece to emerge as a significant European energy hub and I hope, one day, as a destination for U.S. LNG exports, if available opportunities can be locked in.  Development in the energy sector can drive the economy as Greece emerges from this crisis period and begins to lay the foundation for sustainable growth.

With recent progress on the second review, I am hopeful that this summer will mark a turning point for the Greek economy with tangible results in employment and investment, particularly in the energy sector.  My number one priority is to sustain the U.S. effort to spur growth and support economic recovery in Greece.  The U.S. Government will continue to work with our European allies to help Greece emerge from its long economic crisis and fulfill the promise and great potential I see throughout this country. Thank you very much.  Ευχαριστώ πολύ.